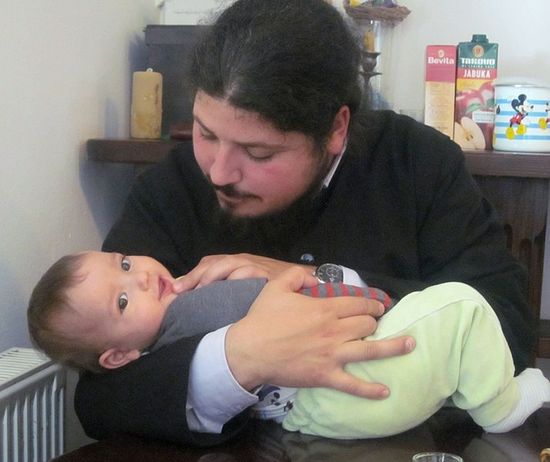 Another Serbian proverb, that draws attention to the Godfather's position in the divine economy, exhorts: "When you go by your Godfather's house, call upon God, even if there is no one at home." Prayers should be offered and candles should also be lit in the church for the Godfather's health and later upon his repose, for his eternal salvation.

Another old saying, that stresses the care to be taken to protect and preserve the Godfather-Godchild relationship, and not to offend or hurt the Godfather, even unintentionally or in the smallest of ways, urges Godchildren with the words: "When you cross your Godfather's field, be careful that even your Godfather's land does not stick to your sandals."

Traditionally, at marriage and baptisms, the Godfather's gifts to his Godchildren were always the most excellent, and often given in gold coins, gold jewelry or money. Reciprocal gifts to him were also equally excellent. This custom reinforced the preeminence of the Godfather-Godchild relationship.

So, why is this all so important? Why does the Orthodox Church prescribe Godparents even for adult baptisms and weddings? It's certainly not only about a child's ability to consent or the need for a witness. It is about the rejection of the earthly order for the heavenly. It's about establishing the principle of spiritual kinship or relationship. It's about the presidency of spiritual kinship or relationship over natural relationships. It is about the establishment of the Kingdom of Heaven.

The Evangelist Mark relates: His mother and his brothers arrived, and, standing outside, sent word to him, and called him. And the multi-ude seated around him, said: “Behold, your mother and your brothers are outside asking for you.” And he answered them, saying, “Who is my mother, or my brothers?” And he looked around at those who sat about Him, and said: “Behold, here is my mother and here are my brothers.” The Holy Apostle Luke records the words of our Lord, Who said: My mother and my brothers are those who hear the word of God and carry it out. There is a new order of relationships in God's Kingdom on earth, which is the Orthodox Church.