Are John 3 and 6 About Baptism and the Eucharist? 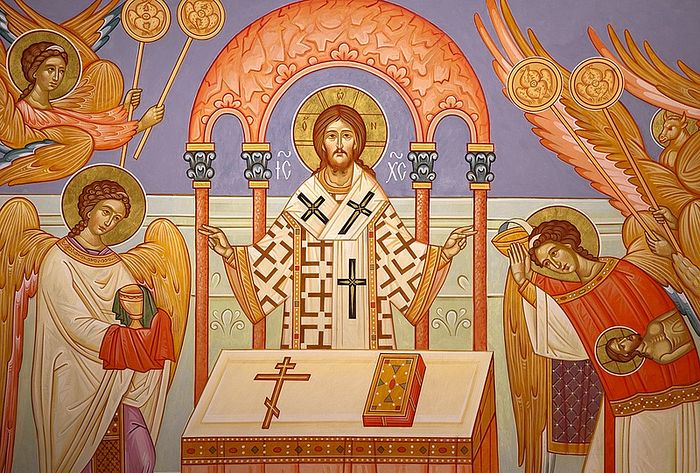 There is a convergence of language in John 3 and 6. Both chapters contain the rare (for John) phrase “Son of Man” a reference to the ascending High Priest in Daniel 7. Both contrast flesh and Spirit. Both refer to the promise of the new exodus. Both allude strongly to Ezekiel 36-37. Jesus is talking about the shape of the new exodus led by the New Moses. These texts are important for several reasons:

1. Jesus emphasizes throughout John that He will ascend to the throne of God, where no man has ever ascended before. This is His function as Son of Man. Likewise, He will take mankind to be with Him, to be in the throne-room of God. That “Son of Man” is used in the Bread of Life discourse and the rebirth discourse means that these have special significance to being joined with Christ in the heavenly throne-room.

2. Both of these texts have relevance for the new exodus. John 3 is a commentary on when the Lord leads His people out of Babylon. He sprinkles them with water, just as Israel passed through the Red Sea and was rained with holy rain. John 6 is about the New Manna that comes from Heaven, which Jesus identifies as His Body and Blood.

3. John 5-6 begins with a note that this series of events occurred at the time of the Passover. This is highly significant for a proper understanding of both chapters. As is widely recognized, the story of the Feeding in all Four Gospels shares resonances with the institution of the Eucharist, which was a Passover Meal. The fulfillment of this miraculous bread is presented by the Lord in John 6 as His Body and Blood. That the Bread of Life discourse is associated with the Passover links it to the words that Jesus declares at the Passover over the Eucharist: “This is my body” and “This is my blood.” This makes it very difficult to argue that consuming Jesus’ body and blood in John 6 is just a metaphor for believing.

4. Immediately after Jesus’ conversation with Nicodemus about being “born again” through water and the Spirit, we are told that Jesus took His Apostles and began a ministry of baptism. Attempts, then, to divide Jesus’ teaching on rebirth from Baptism cannot be sustained. It is clear that St. John is intentionally linking these two stories.

5. What, then, about “believing” in John 3 and John 6? Doesn’t that go against the baptismal and Eucharistic interpretation of these texts?

It is important, as always, to recognize how these words and phrases are used in the Old Testament. When Israel comes out of Egypt in Exodus 14, the division of the Red Sea is linked with their “believing in the Lord and His servant Moses.” When the first generation fails to inherit the land, it is because they did not “believe.” To “believe” in the Pentateuch means to trust that the Lord through Moses will lead them to their inheritance, and this means following them: following Moses between two walls of water. Following the Lord’s instructions to not gather manna on the Sabbath Day. Far from contradicting a sacramental interpretation of John 3 and 6, the language of “believing” reinforces the connection.

7. When St. Paul alludes to these same events in the exodus in 1 Corinthians 10, he refers to Israel being “baptized” into the cloud. He then says that they “ate spiritual food and drank spiritual drink” immediately followed by a discussion of the Eucharist. As Jesus links the Manna with His Body and Blood, so does Paul. As Jesus links the baptism of the new exodus with baptism, so does Paul.

8. The Gospel of John is about Jesus as High Priest of a New Temple. The whole book is structured according to the furniture of the tabernacle. We begin at the Courtyard Altar, with Jesus identified as the “Lamb of God” and we end at the Holy of Holies, with Jesus emerging out of a Tomb with two angels on either side of His burial place, just as the two cherubim in the Holy of Holies. The “Son of Man” is linked with the high priest and thus the Temple, and this rare phrase for John is used in both John 3 and 6. Baptism and the Eucharist are thus presented as liturgical actions in the New Temple.

9. It is often stated that these words cannot be baptismal and Eucharistic because these two sacraments had not yet been instituted. This argument is clearly false. First, John and Jesus were baptizing. When Jesus describes a new exodus faciliated by a rebirth through water and the Spirit, all would have known that He referred to passing through the Red Sea led by the Glory-Cloud. The baptism of John and Jesus was a sign of the coming new exodus. Second, concerning John 6, while the Eucharist had not been instituted, the Jews knew exactly what Manna was. They were expecting a New Moses and a New Exodus, and therefore, New Manna. Jesus is saying that the Manna He will give is His Flesh and Blood. They don’t yet know how that will happen, but that Jesus is claiming this is enough to drive them away. The Apostles finally realize how this will happen at the Last Supper, when Jesus uses the same words to institute the Eucharist.

The Power of the Sacraments in the Lives of Orthodox Christians
Presented by Fr. Nikon of Mount Athos at the Academy of Aikaterini, Greece, 2014
He also saw a person in the large throng of people who was possessed of a demon. This demon manifested itself as a bird. The bird is very dangerous for him for he is not aware of it. He said the bird looked very smooth like velvet. And the astounding thing about this demon possessed person was that he was the same Zen teacher that Fr. Nikon had met in Thessaloniki. The thing that is of great interest to us here is that before the sacrament of baptism Angelo could not see these things clearly but immediately after his baptism he saw them without a problem. This is the marvelous meaning and power of the Sacrament of Baptism in the Orthodox Church.
Comments

David Wear3/2/2022 2:45 pm
Thanks for this excellent article. I’m a Lutheran pastor in Australia and I appreciate these insights. I regularly point catechumens to John 3 & 6 to teach the meaning and importance of Holy Baptism and the Eucharist. The Sacraments are very important to us orthodox Lutherans. God comes to us in a real and tangible way - His Word is truth. Praise be to Christ! God bless you!
×