Mary and the Eucharist in John 19 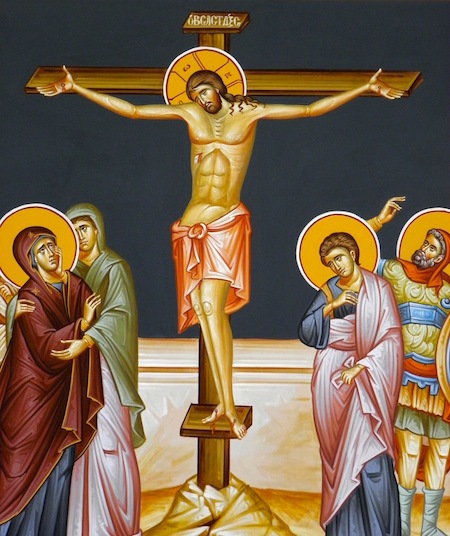 The Beloved Disciple in John is meant as an icon of the entire Christian community. The Lord “loves His own” and His relationship to the Beloved Disciple signifies His relationship with all who are embraced by His love. In John 6, Jesus says that one dwells in Him and He in the person when one consumes His Body and Blood. This is an extension of the eternal indwelling of Father and Son with one another, expressed in John 1:18 by the declaration that the Son was “at the Father’s side.” Yet, at the Last Supper, we find that the Beloved Disciple is “at the side” of Jesus. It is at the Supper of the Lord, when we share in the Eucharist, that we come to dwell in the Son and He in us. We are at his side just as He is at His Father’s side.

John 14 describes “many dwellings” in His Father’s house. The context makes clear that these dwellings are the people who make up the Church. The Spirit dwells in them, constituting them as the dwelling place of God. In John 17, Jesus prays explicitly that His disciples might come to dwell in one another just as Father and Son eternally dwell in one another. The adoption of the Apostle John by the Blessed Virgin Mary resonates with this theme.

Remember that the Beloved Disciple is a symbol of the entire Christian community. John, when describing Jesus’ speech to His mother, actually calls her “the mother.” Accentuating Our Lady’s universal motherhood is the fact that Jesus refers to her as “Woman.” She is not just a woman, she is the Woman, the eschatological Woman, the New Eve. When Jesus tells the Beloved Disciple to take Mary as his mother, He is speaking to all of those who are beloved of him. We all take the Theotokos as our mother. To drive home the point, we are then told that John took Mary to his own home. The many dwellings of the Father are the Father’s children, and each child is to indwell every other child of God. In making this note, St. John is accentuating this point particularly with respect to the eschatological Mother, the Holy Virgin Mary.