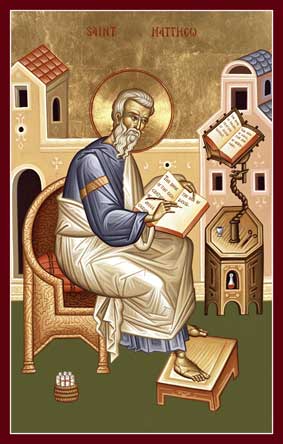 The consensus understanding of St. Matthew’s Gospel is that it was composed anonymously at around 85 AD. There is no evidence for this, but it is the consensus. Briefly, the arguments against Matthean authorship are:

No, it isn’t, because there is no evidence the Gospel ever circulated without its title. There is no dispute in the ancient world as to the authorship of this Gospel. One would expect multiple traditions and some manuscripts without the title page if the authorship was once unknown.

2. Matthew is written in good Greek, but Matthew was a Jew.

Many Jews spoke both Greek and Aramaic. Knowing two languages is very common, especially if one of them is the lingua franca and one of them is your local language. This is why people across Europe often speak their own national language and English. This would be even more true if Americans were everywhere and America ruled European countries as client states, as was true in ancient Palestine.Matthew was also a tax collector, employed by the Roman state. He had to know Greek, and be a capable speaker, if he were to fulfill his job. He was likely capable in shorthand, and taking notes from the oral teachings of a revered teacher or prophet was known in the ancient world. All these factors actually make Matthew ideal to write the first Gospel.

3. Matthew uses Mark, and Mark wasn’t an Apostle. Why would an apostle use a non-apostle?

Tradition unanimously states that Matthew preceded Mark, and there is some good evidence for this. In certain cases, in order for Matthew to be relying on Mark, he would have to radically rearrange and dislocate sentences, so much so that it would be easier to compose it from scratch. If, by contrast, Mark relied in part on Matthew’s Gospel while abridging it in places, the order makes sense.

So, is there any good reason to dismiss the ancient tradition of Matthean authorship? No, there isn’t. If they were making it up, why choose an obscure apostle such as Matthew? Why not pick Peter, John, or James? In fact, out of the Four Gospels, the only one written by a member of the Lord’s inner circle is the Fourth. Mark and Luke are not even attributed to apostles, though Mark writes based on Peter’s testimony.

How about date? Most scholars date it to about 85. As with before, there is no evidence for this view. Here are the essential arguments:

1. Matthew reflects conflict with the Jewish community, which did not occur until later in the first century.

There is no evidence for this idea. Our only sources for the earliest period of Christian history, Acts and Paul, both say that the first persecutions of Christians were Jewish. This is a presupposition driven by a concern to locate the separation of the church and the synagogue later in history and to heap blame on the church for “anti-Semitism.”

2. Matthew mentions the destruction of the Temple.

This barely deserves a response. Matthew records it as prophecy, and the precise wording of the eschatological discourse reflects no memory of the event. Instead, it is drawn from the language of the Hebrew prophets. Only a presupposition that prophecy can’t happen drives this argument.

So, when was Matthew written?

Our Savior was raised from the dead in 30 AD. I will suggest that Matthew composed his Gospel in 30 AD. Why?

1. James quotes Matthew. This means Matthew must be earlier than James.

2. Acts records that the early Christians faced an outbreak of Jewish persecution, which scattered them from Jerusalem. If the chronology is worked out, this occurred in 30 AD.

3. James is bishop of Jerusalem, and he writes to the “twelve tribes in the dispersion” and enjoins them to be faithful and comforted in their suffering persecution. This converges precisely with the scattering from Jerusalem, and there is no other historical event which can explain the data as well: why was it James who wrote it? Why to twelve tribes in dispersion? Why persecution at this time?

4. Matthew is evidently written in Antioch, and some language in the book only makes sense if Matthew is writing from Antioch. This is not a controversial point, and virtually all scholars, whether conservative or liberal, hold this point of view.

5. We know from Acts that the principal location to which the early Christians scattered after the outbreak of persecution was Antioch. Acts 8:1 raises a difficulty for this view, since it says that all were scattered “except the apostles.” What seems probable to me is that Matthew made a personal visit to Antioch to make available the Jesus tradition to the Christians there, and while doing so, he prepared his Gospel. After its completion, he brought a copy to Jerusalem, where it was reviewed and then circulated with the letter of James.

6. Matthew’s concerns are clearly aimed towards a community of Jewish Christians. This makes very good sense against the background of 30 AD, before the mission to the Gentiles had started.

7. Matthew writes that the rumor of the disciples theft of Jesus’ body was still circulating “to this day.” This makes no sense against the backdrop of 85 AD, when the Jerusalem hierarchy had been annihilated and Jews were scattered all over the map. It makes very good sense if this is only about a year after the tomb was discovered empty.

8. The necessity of the composition of a Gospel is easily explained in this light. When all Christians were in Jerusalem, in personal contact with the Twelve, they simply heard it all from the Apostles. After the Christians were scattered from Jerusalem, this was no longer the case. As such, Matthew was called to compose a Gospel to circulate around the churches in order that they might preserve the accurate sense of the Savior’s ministry.

The explanatory power of the above, cumulatively, is very strong. The first Gospel was not written forty years after Jesus’ death. It was written about forty weeks after His death. Did St. Mark "Blunder"?
Fr. John Whiteford
Is it correct that St. Mark "blundered" in the writing of his Gospel? There is no reason why we should conclude that he did, and you will never find any Father of the Church making any such suggestion. However, this is what Fr. Gregory Hallam stated recently in his E-Quip lecture series, in a lecture about St. Mark's Gospel. Ancient Greek New Testament Papyrus Almost Sold on Ebay
Geoffrey Smith, a scholar of early Christianity studies at the University of Texas found a strange Ebay entry last January. An ancient Greek papyrus with quotes from the Gospel of John was being sold at a starting price of 99 dollars.

Thomas Hamilton8/31/2017 6:35 am
Yes, that's the consensus. I believe the consensus is wrong and that Matthew's Gospel is first, and that where there are textual relations, Luke simply drew from Matthew and not Q. There are indications in Mark that he is abridging some of Matthew's material- for example, Mark tells us three of the Lord's parables, where there are several more in Matthew. But Mark begins by saying that "in His teaching" Jesus said those parables, indicating a knowledge that He said more than Mark recorded. John Wenham produces several more examples in his book on the synoptic problem