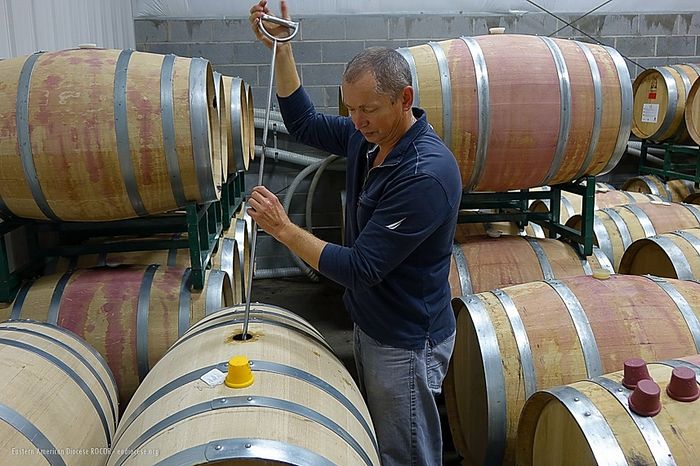 For many today, the war in Afghanistan is ancient history. But in the middle of the 1980s, it was one the most volatile spots on earth. All across a country still living in the Stone Age, global politics of a new world were being decided. And Kandahar was one of the most volatile places within Afghanistan. Locals said that legal authority in Kandahar ended after midday.

"Our objective was to destroy the caravans with weapons coming from Pakistan. We laid in wait along the mountain trails, where the caravans of the Afghan dushmani (enemies of the governing régime) would cross paths," explains former soldier of Spetsnaz special services Andrei Medvedev, who served a year and a half in Kandahar and is now a winegrower and winemaker in North Carolina. "Our helicopters would also patrol the mountain passes, and if they noticed a caravan, then they would begin to ‘go to work on it,’ and our armored vehicle groups would roll out on alert to destroy the enemy. On one of these days where we were put on alert, I received my weapon and was already in the IFV when a senior soldier, who only had two weeks left before discharge, crossed me off the list and said, ‘You still have an entire year to go, so I’ll go this one last time.’ A large number of soldiers in Spetsnaz romanticized the war; I was one of them. But at the same time, we all understood where we were going and what we were up against."

His wish to ride into the mountains was like a game with death. An hour later, it was announced that the armored vehicle was blown up by a landmine, and that everyone in it was lost.

"I served in Afghanistan until 1987, and all those years I thanked God for keeping me alive. With time came an understanding that I must do something worthy in thanks to the Lord for my salvation. Some years later, in 1991, I visited the mother of my fallen comrade in the Chechen town of Gudermes. She listened to my story, looked at me and quietly said that it had been the will of Allah. From that time, I visited her every year until the beginning of the Chechen War."

Andrei strove to become an airborne officer from his childhood: he would picture himself in a light blue beret and telnyashka[1] in his dreams. From seventh grade on, he prepared himself: parachuting, running, swimming, boxing. The airborne officers’ school in Ryazan was highly competitive: chances to enlist right out of school were practically nil. He went into the army and two years later became a student at the school. 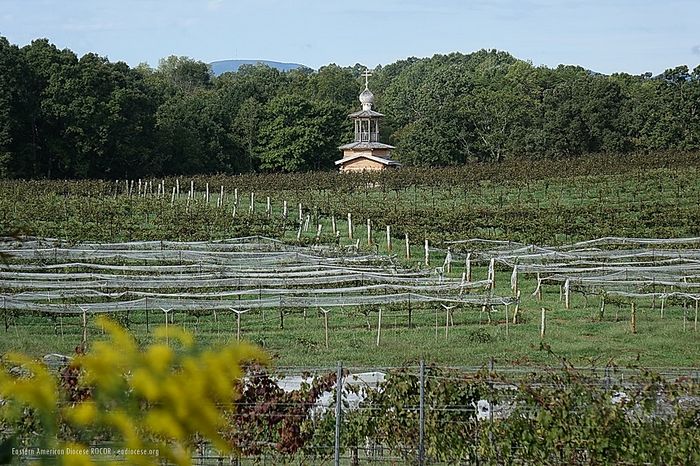 "But Afghanistan severely changed us all and our view of the army," says Andrei. "I never finished the school: I left and enrolled in law school at Moscow State University. I was studying and concurrently taught physical education as the school. Later, I worked for many years as a corporate lawyer, and was the vice president of a large petrochemical company.

"For many years, I wished to take up winemaking. I was getting ready to settle down in France, I went to look at vineyards in California. After many years of running my business, I left my job in 2009 and immediately visited my acquaintances in North Carolina.

"The sun rose in the morning through the fog, trees blossomed, there were vineyards everywhere: an unearthly beauty. Then I realized that this is what I was looking for. I built a house, bought a vineyard. I enrolled in the college in Dobson and there I took the electives for English as a Second Language, what I had learned in Russia was evidently insufficient." 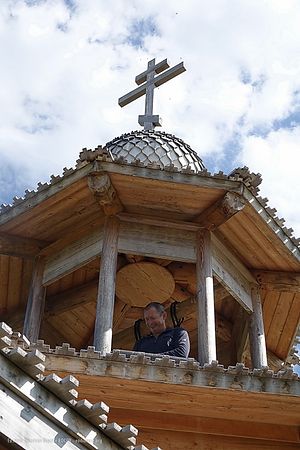 "Two years of schooling helped me receive a basic knowledge of viticulture and winemaking," Andrei continues. "And at the same time, I bought land adjacent to the already-existing Green Creek Vineyards and broke ground on a new vineyard. In 2012, local priests blessed it and in the spring of 2013 built a winery, in which the first wine of the harvest was processed. Now everyone calls this place Russian Chapel Hills Winery."

From every corner of the vineyard, the Orthodox chapel can always be seen. It is wooden, with the familiar onion dome rising above the fields here. The idea behind building a church or chapel in memory of the fallen in the Afghan War, had not left Andrei since the moment when one of his comrades built a church in Nizhny Novgorod. He already understood by then, that if one wants to do something for God, he one needs to pray about it. "We are taught this by the example of Sts. Joachim and Anna," says Andrei Medvedev. "All their long lives, they prayed for deliverance from childlessness, which at that time in Israel was considered a curse. And at the twilight of their lives, the Lord presented them with a Daughter, who would become the Mother of Christ the Savior. In Moscow, I was a casual churchgoer, I would sometimes stop by the church to put up a candle. Here, I came to know God. When I moved to North Carolina, I immediately began to search on the Internet for a Russian church. Soon, I became a parishioner, and later a member of the parish council of St. Nicholas Church in Fletcher."

Having received a blessing from the First Hierarch of the Russian Church Abroad, Metropolitan Hilarion of Eastern American & New York, Andrei placed an order to Archangelsk for premade lumber for the chapel. The chapel was ready and awaited shipment to the USA, where it would have to be assembled – without a single nail, as was done in the 17th century. 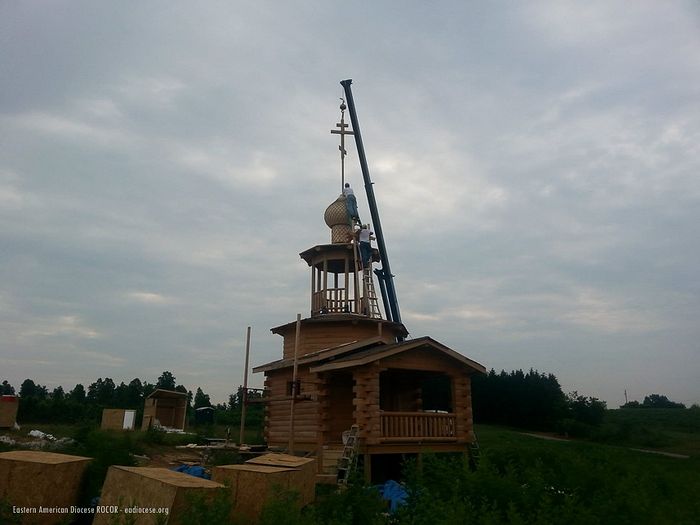 "It was time to pay for the work, and then the bank where all of my money was went under," says Andrei. “But there was no way back. At that moment, I realized that if I give up on my dream, then I will never build this chapel. I ended up in debt, but it seems that this is how the Lord was testing me.”

The chapel was built in accordance with all Orthodox canons, including orientation toward the east. Archpriest Onouphry Keith, former rector of St. Nicholas Church in Fletcher, helped with this task, being an architect by trade. Bells were installed. Together, they all considered a name for the chapel: and it turned out that there were Annas, named in honor of the mother of the Most Holy Theotokos, in the Medvedev family, as well as in the families of both priests at St. Nicholas Church. 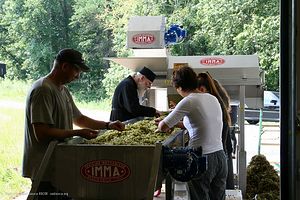 The Chapel of the Righteous Anna, the first Russian Orthodox temple in Polk County, NC, was consecrated on September 3, 2014 by Metropolitan Hilarion. That same day marked Andrei Medvedev’s tonsure to the rank of reader.

On the day of its consecration, a descendent of the famous noble house, Prince George Obolensky, living in the town of Greenville in neighboring South Carolina, donated an ancient family icon from the 17th century to the chapel, depicting the Entrance of the Most Holy Theotokos into the Temple, which includes a depiction of the Righteous Anna. The prince’s parents brought this icon with them to the USA as a priceless gift from Paris, where they had emigrated from Russia after the October Revolution.

Even though the community of Russians in Ukrainians in North Carolina numbers at about 1,000 people, many Americans also come. American veterans of the War in Afghanistan also visit, remembering back to a time when Russians and Americans fought far from home on opposite sides of the barricades. On November 11 of 2014, on the traditional date of Veteran’s Day in America, a panihida was served for the first time for all who gave their lives in wars across the globe.

During Metropolitan Hilarion’s visit in Columbus, Andrei asked for a blessing from the First Hierarch to have annual panihidas at the chapel on the Day of Airborne Soldiers, August 2, when the Church commemorates the Prophet of God Elijah, the patron of paratroopers. 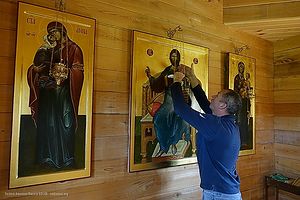 "This year, with God’s help, we gathered 52 tons of grapes from 17 acres of the vineyard and made about 40-thousand bottles of wine in eight assortments," explains Andrei. "By Christmas, we will open the first bottle of kagor, made according it a classical recipe."

Autumn. The last grape is harvested. A crimson-gold shroud replaces the green vesture of hills until the next season. And in the spring, the sun will rise anew from the fog. And it will fill the bunches of grapes with life-giving energy.

From the dawn of Christianity, grapes have been considered a symbol of salvation and renewal, a symbol of the verity of the teaching of Jesus Christ. These are His Words as given to us by the evangelist John in his Gospel: "I am the true vine, and My Father is the husbandman" (John 15:1). 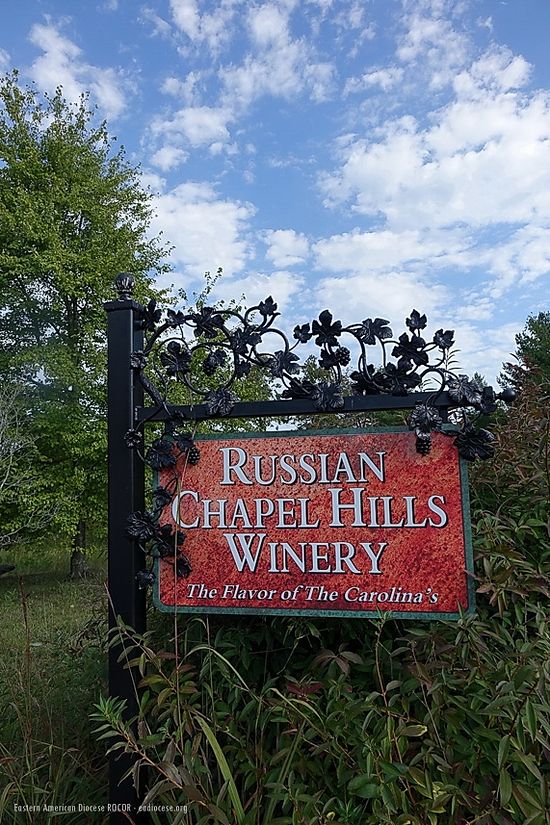 Jackson’s Orthodox Church built on ‘zeal and eagerness’
Snowden said the Orthodox Church seems very different to most Americans, but that is not a bad thing. He said the church does things differently than Protestants, and they do not look down on newcomers if they are uncomfortable.
Comments
×