Transformation through the Lenten Journey 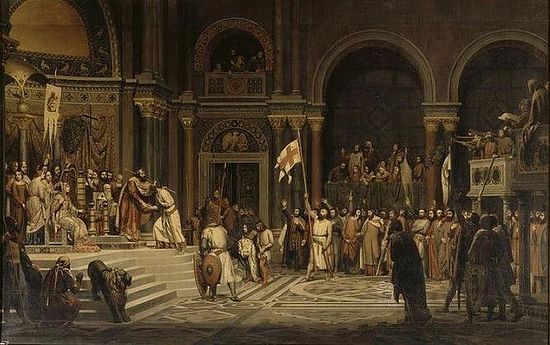 Godfrey of Bouillon before the Byzantine emperor Alexius Comnenus in Constantinople, 1097. Painting by Alexandre Hesse

The Byzantine Court was filled with sycophants, busying themselves with building alliances that would help them rise in status and influence. During the thousand years of the empire a few emperors were tricked into believing these sycophants were truly their friends and could be trusted, when in actuality they were being played, and these flatterers were not their friends. These sycophants were quick to change allegiances should a better opportunity arise, and many an emperor was, in the end, betrayed by those they thought could be trusted.

As we continue on this Lenten journey, let us reexamine our own relationships. Are we sycophants, or do we speak from the heart, without thought for self-promotion? Are we true friends to those with whom we share our lives, or are we always thinking only of ourselves? Do we really desire to serve those who are over us, or do we think only of our own advancement? Do we really desire to grow in the Faith, or are we only focused on the here and now? Are we like the emperor, only surrounding ourselves with flatterers, people who tell us what we want to hear, or are we ready to receive the feedback that would actually help us grown spiritually?

Let us in all humility beseech the Lord, during this Great and Holy Fast, seeking the transformation that is ours through His grace, offering ourselves as a living sacrifice, expecting, because of His loving kindness, to be made whole. Finally, let us not be flatters and betrayers of others, but true friends who always putting ourselves last. Let us love God above all else, and let us love others as ourselves. With God’s help, this Lenten journey will be the most spiritually profitable of them all.