Is One of Jerusalem’s Longest-running Religious Spats Over? 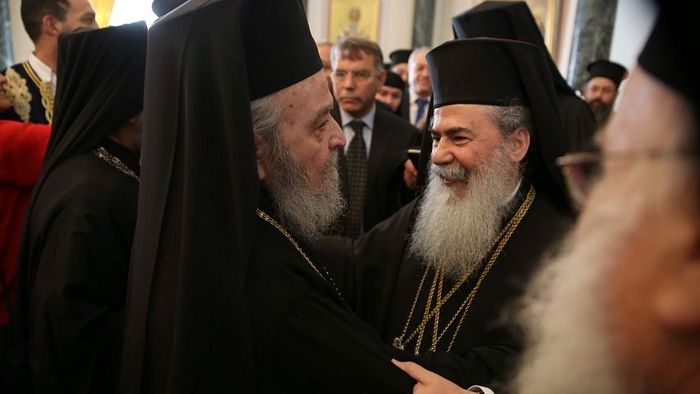 A dramatic reconciliation has occurred in the Greek Orthodox Patriarchy in Jerusalem. After 11 years in solitary confinement, the former head of the church has finally met with the current patriarch, leading officials to hope this will conclude a lengthy and embarrassing affair.

Irenaios was chosen as patriarch of Jerusalem in 2004. Shortly after, though, he was accused of advancing real estate deals with the settler organization Ateret Cohanim and a procedure was launched to remove him.

In 2005, the church’s leaders met in Istanbul and decided to impeach Irenaios and demote him to the rank of a simple monk. A new patriarch, Theophilos III, was chosen to replace him. This was a historic development, since the appointment is meant to be for life and there is no record of such a case in the church’s lengthy history.

Irenaios proceeded to lock himself in his small apartment in the Patriarchate’s building in the Christian Quarter of Jerusalem’s Old City and refused to recognize his successor. He has remained in that apartment almost continuously for the past 11 years. He would get his food by dropping a basket from his window, which was filled by members of the Abu Amar family – a Muslim family considered close to Irenaios. The sad image of “the monk in the window” became a minor tourist attraction over the years.

From that apartment, he continued to struggle to clear his name. Initially, he had the backing of the Israeli government, which refused to recognize Theophilos. Then-Prime Minister Ariel Sharon said it would be inconceivable for Israel to accept an impeachment based on the sale of property to Jews. But after the Greek government exerted pressure, the state eventually recognized Theophilos.

Over the years, Irenaios’ small group of supporters claimed the church had imprisoned him in the apartment, while the church insisted he had cloistered himself. The assumption was he knew that he had always been free to leave the building, but feared that if he did, he might not be allowed to return.

Over the past few months, the murky relationship between the two patriarchs seemed to have cleared. In November, Irenaios was hospitalized at Hadassah University Hospital, Mt. Scopus, and Theophilos came to visit him – a move that generated great interest among Jerusalem’s Greek community.

But the real breakthrough came last Tuesday, when the church marked Forty Martyrs Day, which is also the day of St. Theophilos, when it is customary to bless all those named after him. Patriarch Theophilos held a reception for all those wanting to bless him, and, to the shock of the crowd, Irenaios came to give his blessing. The Feast of Abba Theodosius the Cenobiarch Tenth Anniversary of the Enthronement of His Beatitude Theophilos, Patriarch of Jerusalem

Mina khoury3/29/2016 10:27 pm
Both so called patriarchs are unworthy of the title because both are corrupt and used their post for personal financial gains. They need to be sent back to the countries and return land sold or leased to the Jewish occupiers back to its original Palestinian owners and give the leadership of the church to the Palestinians

Pavel3/29/2016 11:29 am
Did the article mean to say "irineos came to receive his blessing" rather "than give his blessing?" A bit of a difference if it was Irineos giving the blessing rather than receiving. Hopefully this is the end of the unfortunate period....
×