Consecration of His Grace Nikodemos of Nitria 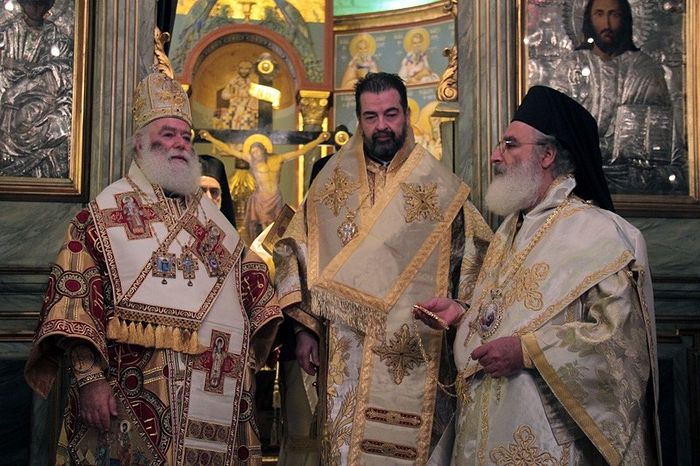 On March 27, 2016, the Second Sunday of Lent, His Beatitude Theodoros II, Pope and Patriarch of Alexandria and All Africa officiated at Orthros, and celebrated the Patriarchal Divine Liturgy during which he celebrated the consecration of His Grace Nikodemos Bishop of Nitria at the Holy Patriarchal Cathedral Church of St. Savvas the Sanctified in Alexandria.

Just before the consecration, the Bishop-elect Nikodemos wholeheartedly thanked the Alexandrian Primate and his Holy Synod for this designation and his promotion to Bishop and declared his lifelong obedience and dedication to His Beatitude the Patriarch and the Throne of the Apostle Mark,

His Beatitude then went on to speak in admonitory words regarding the great office of the Hierarchy as well as of the sacrificial disposition of the Shepherds of the Church, and with great emotion of the qualities of the Bishop-elect Nikodemos, saying that he is not new to the Church, but has served it for 37 years, of which 22 were spent in service to the Greeks of South Africa.

On the eve of his consecration, His Grace gave the Message in the Patriarchal Chapel of Sts. Theodore in the Patriarchal Mansion, in the presence of His Beatitude and Hierarchs of the Throne, and after the Service His Beatitude welcomed His Eminence Andreas, Metropolitan of Arkalohori, praising him and his academic contribution and thanking him for his multifaceted help which he gives to the ancient Patriarchate of Alexandria and its Hierarchs. 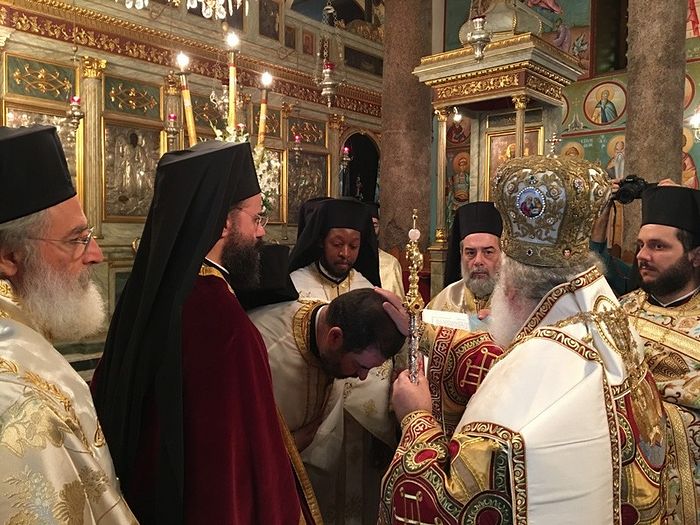 His Grace Nikodemos Bishop of Nitria (born Nicholas Boulaxis), son of Ioannis and Irene, was born in Egares on the Island of Naxos on January 30, 1960. At the age of 14 he went to Jerusalem where he graduated from the Patriarchal Academy of Holy Zion. After his High School years and at age 17 he was tonsured a monk and renamed Nikodemos and was ordained Deacon of the Holy Sepulchre, by venerable order of the late Patriarch Benedict I of Jerusalem and the late Metropolitan Germanos of Petra.

He served the late Patriarch with dedication for three consecutive years until his passing. He also served his successor the late Patriarch Diodoros of Jerusalem as Archdeacon, up until his ordination to the second rank of the Priesthood in 1982. From 1984 he studied theology at the National Kapodistrian University in Athens, from where he graduated in 1988. In May of 1990 he went to the United States of America where he served for four years. His Beatitude Theodoros II congratulates Archimandrite Gerasimos Marmatakis on his election as new Metropolitan of Petra and Herronisos in Crete
On the morning of December 8, having received with great joy and emotion the news of the worthy election of Archimandrite Gerasimos Marmatakis, abbot of the holy Monastery of Agarathos, as the new Metropolitan of Petra and Herronisos, His Beatitude Theodoros II, Pope and Patriarch of Alexandria and All Africa communicated with him and sent him a letter, expressing his warm congratulations. Homily of the Patriarch of Alexandria at the Consecration of the Bishop of Kisumu and West Kenya Athanasios
"The theology of our Church is not a double-headed theology. It is not academic. It does not begin and end in libraries and university laboratories. The theology of our Church begins at the Holy Altar! That is the greatest theological Table which produces the one theology – the theology of the Immaculate Lamb. On the Holy Altar is the sacrificial lamb. It is the broken, divided and never expended Christ. He is the centre “of the entire Church.” He is the lighting strength, the source of sanctity, from which all of creation, strengthened both in logic and intellect sends up the eternal doxology." Putin meets with Patriarch of Alexandria and All Africa