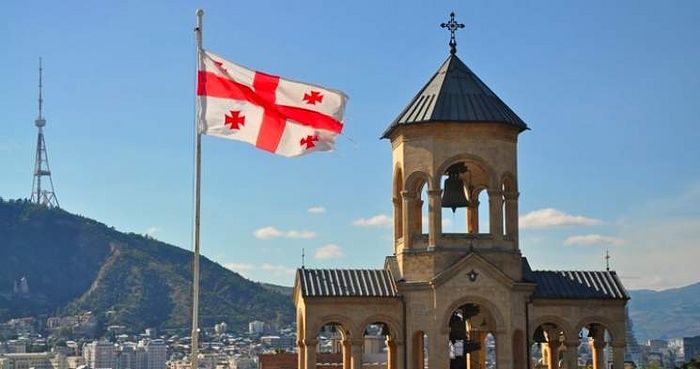 After bankrolling everything from the Obama campaign and Occupy Wall Street to open-borders activists and revolutionary movements around the world, billionaire globalist George Soros has a new target: churches and pastors in the nation of Georgia that are worried about surrendering their future to the European Union. Yes, the same EU that Soros, a self-described atheist, recently said was on the “verge of collapse.”

The Soros-globalist agenda here is simple and fairly transparent. In essence, Soros and various European governments are tired of pastors from the Georgian Orthodox Church warning their flocks about the dangers of surrendering their sovereignty and right to self-government to the increasingly radical EU super-state. And so, they are using Soros money and taxpayer funds to “train” the pastors in how to love the EU and promote it to their trusting congregations.

The Soros organization at the center of the scheming is known as the “Center for Development and Democracy,” or CDD. Ironically, the revelations about Soros' efforts to co-opt the church in Georgia came from one of Soros' own propaganda organs, Eurasianet.org, which was touting the schemes. A similar phenomenon occurred recently in the United States, when Soros-funded anti-police activists and riots were promoted in Soros-funded propaganda outlets that eventually filtered into the national news, which rarely, if ever, mentioned Soros' role in all of it.

The Soros propaganda piece about Georgia notes that, according to polls, the Georgian Orthodox Church is the most trusted institution among Georgians. More than four out of five belong to the church. Even though the tax-funded church's official position is that Georgia should cozy up with the eurocrats in Brussels, Soros' propaganda article argues that “many proponents of European Union integration” view the institution as an obstacle to allowing the EU to swallow up the former Soviet nation of close to 4 million. The EU is also losing favor among Georgians, surveys show.

What is today known as Georgia has been Christian since around the fourth century, according to historical records, Soviet tyranny notwithstanding. “Part of the congregation thinks Europe, the West generally, is a threat to Georgia’s original culture and traditions,” church leader Grigol Berbichashvili is quoted as saying in the Soros piece, which was reprinted in various other propaganda organs. “Hard work is needed to overcome this environment.” Hard work, indeed, along with deception, and lots of money from taxpayers and Soros.

But Georgians are becoming less and less enthusiastic about the EU. “Some critics blame the Church for encouraging such views,” the Soros propaganda piece noted, without identifying the alleged critics. “But representatives of the [Soros-funded] Center for Development and Democracy (CDD), a Tbilisi-based non-governmental organization, believe the Church can become an important partner in fostering understanding and greater support for EU integration.”

The Soros-funded AstroTurf group, using loot extracted from British and Dutch taxpayers for its efforts to influence Georgian politics, has developed what the Soros propaganda organ called a “training project.” This project allegedly raises “awareness about the EU integration process in Georgia among parish-level priests, along with church-affiliated educators,” Soros' Eurasianet.org reported.

And that money buys quite a bit on the ground, it seems. Since 2014, some 1,700 priests and church-linked teachers have attended Soros indoctrination sessions presenting lies about the EU. “Greater awareness about the benefits [sic] of closer EU ties, the thinking goes, can enable participating priests to better lead debates among members of their respective congregations,” the Soros propaganda outlet reported, adding that clergy are especially influential in rural areas. “Sermons, confessions, group pilgrimages, and social events such as weddings and funerals all provide opportunities for priests to share their knowledge.”

The sort of propaganda being dispensed at the “training” sessions for priests becomes obvious from the report, too. “If it is about respecting our culture and uniqueness, given we also respect theirs, what is there to be scared of?” priest Giorgi Gogesashvili said about the EU after what he called “fruitful” training sessions with the Soros group.

One of the speakers at the sessions, Mikheil Mirziashvili from the globalist Soros-linked Crisis Management Initiative, echoed that deception. “After explaining that such [sensitive] issues as same-sex marriage, for example, are the sovereign responsibility of any country [to decide], things get clear and [participants] even ask ‘If that [explanation] was so easy, why did nobody explain it before?’” Mirziashvili claimed.

In the real world, of course, the EU has become infamous for showering taxpayer funds on the radical abortion lobby, programs to sexualize young children with pornographic “sex education,” and pro-homosexual groups, even those linked to the promotion of pedophilia. The EU and its kangaroo “courts” have also been usurping ever broader powers over practically everything, including the family. In fact, the EU has even ordered national governments to criminalize free speech and conscript journalists into the war on traditional marriage and family values — under threat of prison in some places.

In addition to Soros, much of the propaganda for Georgian priests is financed by EU governments that are rabidly opposed to traditional marriage and even go so far as to imprison people for expressing the biblical view that homosexual acts are a sin. “The Georgian Orthodox Church is a very important player in … Georgian society and we have never had projects targeting representatives of this community,” the Netherlands’ deputy head of mission to Georgia, Floor Nuiten-Elzinga, said in an e-mail to the Soros propaganda organ about its financing of the training.

Ironically, recent polls show that most Dutch voters — whose resounding “no” vote on the EU Constitution was ignored — want a referendum on EU membership. About equal numbers would vote to leave as would seek to remain in the scandal-plagued super-state, the polls claim, although the real numbers are probably more heavily tilted toward secession. In Britain, a conflict is raging as the establishment seeks desperately to stop voters from seceding. Why those anti-EU taxpayers should be forced to finance deceptive pro-EU propaganda targeting churches was not immediately clear.

Like the situation in Ukraine, where Soros was also a key player, globalists are trying to deceive the people of Georgia into a false choice — the notion that they must either surrender their nation to the authoritarian EU regime, or to Vladimir Putin's supposedly similarly autocratic, sovereignty-shredding “integration” scheme known as the Eurasian Union. In short, heads, Georgia loses; tails, globalists win. But it is a false choice. The people of Georgia could simply retain their sovereignty and avoid entangling alliances with either super-state.

The plan for what Soros and others call a “New World Order,” though, demands that all nations submit to a regional government, which would itself be subservient to the globalist-controlled United Nations. Globalist apparatchik Henry “New World Order” Kissinger explained as much in his recently released book World Order. “The contemporary quest for world order [world government] will require a coherent strategy to establish a concept of order [regional government] within the various regions and to relate these regional orders [governments] to one another,” he wrote. Soros apparently agrees.

Of course, Soros schemes to co-opt targeted Christian churches and movements are not limited to Georgia. In the United States, the radical statist has showered millions of dollars on “Christian” movements to promote open borders, abortion, homosexuality, globalism, statism, and other anti-Christian extremism. He has referred to the savage Communist Party dictatorship in China, which mercilessly persecutes Christians, as the leader of the "New World Order."

Soros himself, meanwhile, despite his “generous” funding of far-left “Christian” schemes and churches, is not a Christian, but an atheist. And while the protege of the Rothschild banking dynasty is of Hungarian-Jewish descent, he has also admitted publicly to helping the National Socialist (Nazi) regime confiscate the property of Jews. In an interview on 60 Minutes, the radical billionaire even said he felt no guilt over betraying Jews, because if he had not done it, “somebody else would — would — would be taking [the Jewish property] away anyhow.”

Ironically, Soros recently admitted that the EU is “on the verge of collapse” due to the influx of millions of Middle Eastern refugees and migrants — part of a crisis that he and his fellow globalists played a key role in orchestrating. So despite his phony efforts to style himself a “philanthropist,” trying to co-opt churches and trick the people of Georgia into surrendering their nation and their future to an out-of-control super-state on the “verge of collapse” can hardly be considered a humanitarian gesture.

In Ephesians 5:11, the Bible urges Christians to “have no fellowship with the unfruitful works of darkness, but rather reprove them.” The people of Georgia, the Orthodox Church, and Christians around the world should take heed. George Soros funds Greek opposition
There has been a sweeping reaction to publication by the authoritative German business weekly WirtschaftsWoche. Eastern Europe vs the Open Society
Srdja Trifkovic
Soros supports programs and organizations that further abortion rights and increased access to birth control devices; advocate ever more stringent gun control; and demand abolition of the death penalty. He supports radical feminists and “gay” activists, same-sex “marriage” naturally included. OSI states innocently enough that its objectives include “the strengthening of civil society; economic reform; education at all levels; human rights; legal reform and public administration; public health; and arts and culture,” but the way it goes about these tasks is not “philanthropy” but political activism in pursuit of all the familiar causes of the radical left—and some additional, distinctly creepy ones such as “Death in America.”
Comments

Ronald A. G. SARKIS4/5/2016 8:46 pm
I have numerous relatives, friends, acquaintances, clients, etc residing in Lebanon, Middle-East, and overseas, who doubt that the most famous Mr. Soros is atheist. They are inclined to believe he is a jew. Personally, I chosed to wait, observe and see.

Sally Iloff4/5/2016 8:20 pm
Trust in the Lord Jesus and pray for His Bride the Church, including the Orthodox Church of Georgia! Soros has task to fulfill given to him by the Lucifer servants from "Walls treat" to right the Bride in any cost with any possible tool. That supposed to show us how desperate in those late days are all Illuminaties, knowing there time is tikking out, and is counted and measured coming to end!
×