Metropolitan Andrew of Ghori and Ateni 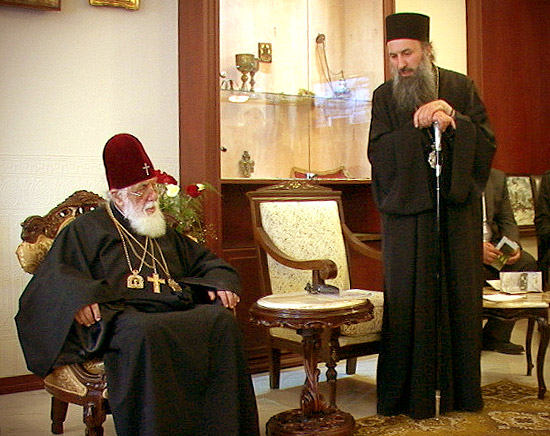 Below is the reply of the Georgian Orthodox Church representative, His Eminence Metropolitan Andrew of Ghori and Ateni, to an article written by the Archpriest of the Ecumenical Patriarchate (George Tsetsi) entitled "A True Event or Provocation, the decision of the Church of Georgia?" (source for both letters: amen.gr)

His Eminence's reply is thorough, forthright and quite revealing both as to how, on the one hand, the Georgian Church has been consistent and forthright throughout, even while showing great restraint and patience for the sake of Orthodox unity, and, on the other hand, how the Ecumenical Patriarchate has been heavy-handed, pushy and dismissive not only of the Church of Georgia, but also the Patriarchate of Antioch.

The letter also confirms that the Church of Georgia and the Patriarchate of Antioch have refused to sign the text "The Mystery of Marriage and its Impediments." It is also stated that the text "Relations of the Orthodox Church with the Rest of the Christian World" was severely critiqued and criticized by the Holy Synod of the Church of Georgia at its last meeting, after the meeting of the Primates in Geneva.

Likewise, the bishop counters the Archpriest's critical stance toward the principle of unanimity and asks the Archpriest if the decision taken by the Primates to have this principle guide the Great and Holy Synod is now being questioned. This brings to mind the recent speech by Patriarch Bartholomew where he redefined unanimity to essentially negate it, saying that if one or two Churches don't accept a text that will be duly noted, but the text will pass.

Although the entire letter is valuable and revealing, thus far the following section, which is the most necessary, has been translated:

2. With the completion of the Special Inter-Orthodox Commission [appointed in 2014 and finishing its work in the spring of 2015], and having been informed of the result by its representative, the Holy Synod of the Church of Georgia sent a letter, on behalf of the Catholicos-Patrairch Ilia to His All-Holiness, the Ecumenical Patriarch, in which, among other things, it expressed the following thoughts and observations regarding the texts, which had been sent to the Fifth Pre-Synodical Committee meeting [Oct. 2015] for revision and confirmation:

a) The texts which are being prepared for the Great and Holy Council must stress clearly and without ambiguity that the Orthodox Church is the unique One, Holy, Catholic and Apostolic Church in which there is Apostolic Succession, true Baptism, the Divine Eucharist and the other Holy Mysteries of the Christian Faith.

b) It must be stated most clearly, that according to its ontological nature it is impossible for the unity of the Church to be broken [for the Church to be divided]. It is always for this reason that the Orthodox Church conducts a dialogue with the various Confessions with the aim of their return to the embrace of the Church.

c) The text "Relations of the Orthodox Church with the Rest of the Christian World" must contain the evaluation of the bi-lateral dialogues being carried out with the various Christian Confessions, for the responsibility of determining its future course belongs precisely to the Great and Holy Council.

d) We consider unacceptable the submission of the texts, "The Question of a Common Calendar," and "Impediments to Marriage," in their present form, to the Great Council, for these come into opposition with the canonical Tradition of the Orthodox Church.

... The letter also stated that all of the texts which have already passed through the stages of preparation, must be made public, so as to give enough time to the pleoroma of the Church to study them and offer their views ...

3. With such direction [from our Church] and with a disposition to work for the upbuilding of the Church we, the representatives of the Orthodox Church of Georgia, went to the Fifth Pre-Synodical Meeting [in Oct. of 2015]. Yet, surprises were awaiting us there as well. When work began, His Eminence, the President [Met. John Zizoulas], stated that, in his opinion, the meeting was not afforded the authority to make changes to the texts of the Pre-Synodical Meetings of 1982 and 1986, but only to make changes to the changes we ourselves made as the Special Inter-Orthodox Committee!

When we finally arrived at examining the text "Relations of the Orthodox Church with the Rest of the Christian World", the right of the Most Holy Churches of Georgia and and Antioch representatives to express our opinions (guaranteed by the Pan-Orthodox Statutes) were revoked with the excuse that we had not submitted written proposals with regard to the suggested changes to the texts.

Then, the equal participation of the representatives of the Churches of Georgia and Antioch was put to vote by the Full Body of the Meeting. We felt extremely insulted. In the end, the right to speak was "given" to us, however we were unable to take advantage of it for the improvement of the entire text.

If this stance of ours is to be labeled "stubborn and scholastic behaivor" [as the Archpriest of the E.P George Tsetsi wrote in his article, to which this letter is a response], then how should one characterize the action of the President of the Special Committee [Met. John Zizioulas] who, for seven hours tried to "convince" the Churches' representatives to accept the change of only one paragraph according to his preference? VIDEO: Georgian Orthodox Church rejects document on ecumenism drafted for the Great Council, 2016.
Following the session of the Holy Synod of the Georgian Apostolic Orthodox Church held on February 16, 2016, His Holiness Ilia II, Patriarch and Catholicos of Tbilisi and All Georgia announced that the Synod has rejected the document "The relation of the Orthodox Church towards the rest of the Christian world" which was prepared for the upcoming Pan-Orthodox Council to be held in Crete in June 2016.

isidora4/7/2016 2:03 pm
Seeing the aggressive arrogant behavior of Bartholemew of Istanbul, I think he looks more and more like a second papacy. Seeing his endless efforts to undermine Orthodoxy, I would suggest the upcoming meeting be renamed The Pitiful Unholy Synod of the Non-Orthodox.

Castrese Tipaldi4/6/2016 3:11 pm
The unacceptable document come out of Geneva about the relation of the Church with the heterodox galaxy has seen the involvement of high ranking hierarchies of Moscow Patriarchate in its preparation and, while it has been already rejected by many local churches and will not be accepted by almost nobody in the flock of the Rus’, no clear word of condemnation has been heard from her hierarchies. Do they wait for the meeting to express that condemnation? And why? Or do they agree with it? Do they look for a compromise with the apostates of Istanbul? Diplomacy is good in dealing with external structures of the world, but in Church matters compromise leads to perdition.

This meeting until now and in all its aspect has been nothing but a continual provocation to the faithful and it has never been possible to see its utility for the Church, while I could point out a lot of benefits it may have (and have already had) for Her enemies, the most harmful being the endless sowing of discords and divisions in the Body of Christ, a thing that the apostates of Istanbul have mastered since a century ago!

Castrese Tipaldi4/6/2016 3:10 pm
The apostates of Istanbul have been busily working for the destruction of the Church from the inside since a century already.
I hope this is something crystal clear to His Holiness and the leading hierarchies of Holy Rus'. Unfortunately, at the moment we can't say for sure.

While I agree that the “non-commemorators” are mistaken and it’s a gross error to give to the joint declaration of the Havana a meaning that it definitely does not have, the bitterness and the fears of those clergy and monastics are at least understandable, if not justifiable.
×