Cathedral of the Annunciation in Voronezh 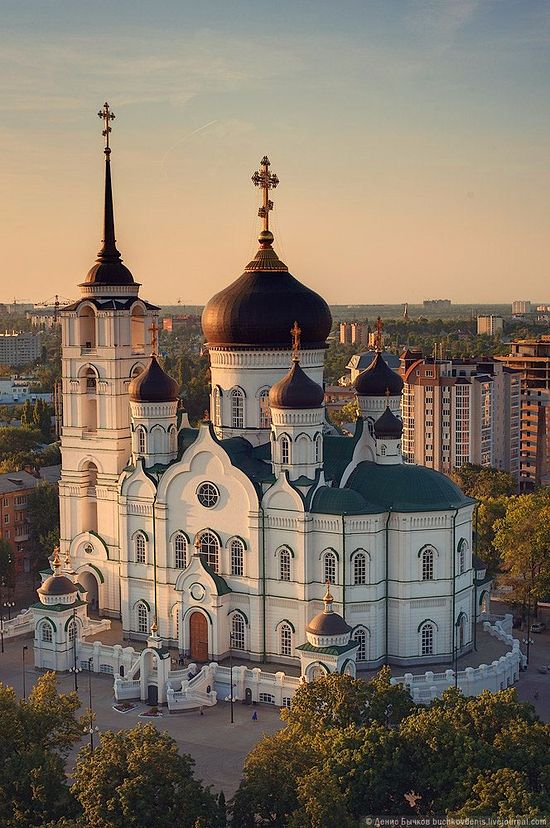 The Cathedral of the Annunciation is located in the center of the city of Voronezh. Built by the Russian architect V.P. Shevelyova in the Russian-Byzantine style, construction was carried out between 1998 and 2009. The height of the cathedral at its highest point of 97 meters, makes it the third largest Orthodox church in Russia and one of the tallest Orthodox churches in the world.

The current five-domed cathedral with an attached bell tower was patterned after St. Vladimir's Cathedral, built in the late 19th century in a Russo-Byzantine style harking back to the works of Konstantin Thon and demolished by the Bolsheviks in the mid-twentieth century.

The church takes its name from the eponymous Ukrainian Baroque cathedral that was built in 1718-35 in place of an earlier church commissioned by St. Mitrofan of Voronezh; it was destroyed by the Soviets in the 1950s. The existing bell tower echoes the one designed for the old cathedral built by Giacomo Quarenghi.

His Holiness Patriarch Kirill celebrated the consecration of the Annunciation Cathedral in Voronezh on Sept. 18, 2011. The monument to St. Mitrofan was unveiled in front of the cathedral where his relics have found their final resting place.

Bishop Mitrofan was buried in the Annunciation Monastery in the presence of Emperor Peter the Great in 1703. When fourteen years later his tomb was opened, Mitrofan's body was found to be whole and his relics were proclaimed to have healing powers. After he was formally canonized in 1832 and Emperor Nicholas I paid a visit to his shrine, his fame increased and large numbers of pilgrims from Central Russia started flocking to his tomb in Voronezh. The first Moscow church in his name was consecrated in 1895.

The Bolsheviks had Mitrofan's relics confiscated. It was in 1989 that the relics were returned to the Russian Orthodox Church. In 2003, a monument of Saint Mitrofan was unveiled in front of the Annunciation Cathedral where his relics have found their final resting place.

This church is part of the Beautiful Churches of Russia series on Royal Russia. Over 100 Refugees Accommodated at Unique Church-Run Shelter in Voronezh Region
In total, according to data of July 18, there are more than 9,000 refugees in the Voronezh Diocese, around 1,500 of them put up at centers of temporary accommodation, while others have settled in the houses of local residents. Many of them are searching for employment in the region.
Comments
×