The Ladder of Divine Ascent and Moral Improvement 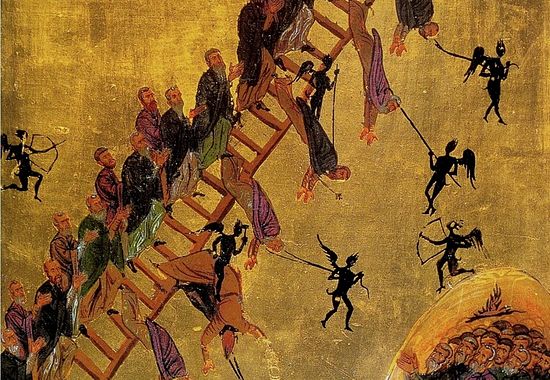 The Fourth Sunday of Great Lent in the Orthodox Church, is dedicated to St. John Climacus, the author of the ancient work, The Ladder of Divine Ascent. It is a classic work describing “steps” within the life of the struggling ascetic. There is an icon associated with this work, picturing monastics climbing the rungs of a ladder to heaven, battling demons who are trying to pull them off. However, ladders are dangerous things to put in the hands of a modern Christian.

Modernity likes ladders. We like the idea of upward mobility, of continuing improvement, of moral progress. We speak of “career ladders” and the “ladder of success.” It is the myth of personal power. Modernity is a cultural phenomenon created by the theology of the Reformation and the philosophy of the Enlightenment. Freed from the constraints of inherited tradition (such as the Catholic Church) and the royal state (hurrah for democracy), modernity is a story told to individuals that they can now become whatever they want. Freedom and personal industry are the twin rails supporting the rungs of progress. As a philosophy, this idea and its associated notions are the bedrock of free-market capitalism. As theology, it is the foundation for self-help Christianity and the positive, motivational preaching of contemporary religion. “Be all that you can be, and Jesus can help!”

Nurtured in this culture, contemporary Orthodox believers are not immune to its allure, particularly if the images appear in the guise of desert monasticism and Byzantine/Russian-style striving. More than once I have heard the sad confession, “I don’t feel like I’m a very good Orthodox Christian.” Implied in this statement is that Orthodox Christians should, somehow, be better than other Christians. Some foolish people even call us the “marines” of the spiritual life.

Of course, all of this, particularly when applied to writings such as St. John’s Ladder, is pure distortion and delusion. Its most subtle and seductive version is that of moral progress. I wrote a series of articles last year denouncing the concept of moral progress, identifying it as largely a modern notion and not consistent with the mind of the fathers. Here, I reaffirm that without equivocation.

We simply are not saved by getting better. It is a false image and a false goal. Of course, critics will charge that I’m being defeatist and suggesting a path devoid of moral effort. I am doing nothing of the sort. Everyone should, at all times, struggle against sin. But measuring, even watching for improvement can be not only self-defeating but sinful in itself. The Ladder points to a very different path:

We do not gradually improve and thereby leave our shame behind us. The way down is the way up. The ladder of divine ascent is actually a ladder of divine descent. The path to union with God is only found in making the descent with Him. “Lo, if I descend into hell, Thou art there” (Ps 139:8). St. Gregory the Theologian says, “If He descends into hell, go with Him” (Oration 45).

The path of modernity carries no humility. It breeds pride, and frequently contempt. Failure is its nemesis. We blame ourselves for laziness and sloth, certain that a little more effort will make the difference. Like a child given a bad grade, we plead that we’ll try harder. Confession is seen as the Second Chance, the opportunity to pull up our grades. “Loser!” is the taunt of the modern world (a word spawned in the pit of hell).

But St. John points us towards our shame. He does not describe a path of moral improvement. His path follows the Cross, which is the descent into Hades. My failure, not sought for its own sake (we do not sin in order to gain grace), is always and immediately the gate of Hades and the gate of Paradise. When I acknowledge my failure and refuse to hide from its shame, we can call out for Christ to comfort us. “I did not turn my face from the shame and the spitting” (Is. 50:6). He will meet us in our shame, and takes it upon Himself. My failure becomes the failure of God (2 Cor. 5:21). It does not separate me from Christ, but, ironically, unites me to Him in the paradox that is at the very heart of our salvation. God became what we are, that we might become what He is. God does not meet us in the middle. He meets us at the bottom and asks us to meet Him there as well.

It is within that place that true humility is born. Judgment ceases. If I accept my shame in union with Christ, how can I judge another? Indeed, it is largely my efforts to avoid my shame that makes me judge my brother. We can only avoid judging if we “see our own transgressions” (as we are taught in the Prayer of St. Ephrem).

Modernity loves excellence. The moral improvement pitches of the motivational preachers love the drive for excellence. Our bosses and the owners demand that we strive for excellence. God is not our boss, nor does He place us in His debt (“freely you have received”). The constant nagging voice demanding improvement and excellence is not the voice of God. It is often nothing more than the neurotic echo of modernity sounding in our brains. It drives us with the threat of shame. However, Christ has trampled down shame by shame and invites us to do the same thing. “You cannot escape shame except by shame.”

Become a Christian who follows Christ. We do not seek to please Him with our excellence. We seek to imitate Him by going where He has gone. Sunday of St. John of the Ladder
Met. Anthony of Surouzh

Sunday of St. John of the Ladder
Metropolitan Anthony of Sourozh
Lent is a time of renewal when like spring, everything become new again; when our life that had gone into a twilight becomes alive with all the intensity that God can communicate to us, humans, by making us partakers of His Holy Spirit, by making us partakers, through the Holy Sacraments and the direct gift of God, of the Divine nature. Homily on the Fourth Sunday of Great Lent. The Significance of Fasting in the Struggle against Fallen Spirits
St. Ignatius (Brianchaninov)

Homily on the Fourth Sunday of Great Lent. The Significance of Fasting in the Struggle against Fallen Spirits
St. Ignatius (Brianchaninov)
The Lord said to His Apostles about the evil spirits, This kind can come forth by nothing, but by prayer and fasting (Mk. 9:29). Here is a new aspect of fasting! Fasting is acceptable to God when it is preceded by the great virtue of mercy; fasting prepares a reward in heaven when it is foreign to hypocrisy and vainglory; fasting works when it is joined with another great virtue—prayer. How does it work? It not only tames the passions in the human body, but it enters into battle with the spirits of evil, and conquers them.
Comments