St. Mark of the Pskov Caves 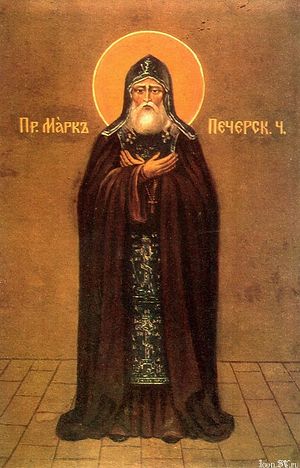 Life in monasteries and hermitages began in Russia almost at the same time that St. Prince Vladimir brought about the Christianization of Russia. The hermitage living style takes its origin in the famous Kiev Caves Lavra (also known as the Kiev Monastery of the Caves), which was considered the paragon of monastic life. Taking the Kiev Caves Lavra as a model, various monasteries were built near the city of Pskov, including the St. Eleazar, St. Savva of Krypets and St. Nicander monasteries.

The chronicles often mention the similarity between the Pskov- Caves Monastery and the Kiev Caves Lavra. Both of them have holy caves where the relics of local saints, hermits and other men of faith are buried, and where everyone is amazed by the fact that there is no smell of decay there, but there is instead a sweet and grace-filled fragrance.

People inhabited the Pskov caves long before the times of Venerable Mark, who was one of the first monks living in the valley of the Kamenets river. The site currently occupied by the Pskov Caves Monastery was formerly a thick forest. Hunters from Izborsk often came there for wild animals. From time to time, during hunting, they heard church hymns coming from somewhere. As they failed to find anyone in the woods, they believed it was angelic singing, which pointed to the presence of God’s grace consecrating that place. Some time later, the Izborsk natives purchased this land from the inhabitants of the Pskov region. John Dementiev became the owner of the piece of land currently surrounding the monastery. It was he who discovered the God-created caves when he was cutting down trees exactly in the place where the hunters had heard the singing—the place which is now known as the Holy Hill. One of the trees fell down and pulled down with it another large tree, along with a number smaller ones, thus opening a large hole in the ground. John then saw that it was the entrance to a large cave with a writing upon it saying, the “God-Created Cave”. The writing remained there for a long time ever since. This happened in 1392. But only God knows for how long hermits had lived and prayed in the caves before that date. The name of St. Mark is the only one that we know.

St. Mark was probably a local, who knew all the mysteries of the caves, but he might also have come to this sacred place from other Russian lands, being led by God’s providence. This was a great monastic labor, as the first Pskov monasteries were regularly attacked by Livonian knights. Monks were killed or taken prisoner. Those who managed to escape fled to the caves of the Kamenets river. Thus, St. Mark and other monks hiding in the forest and caves opened the way to the later foundation of a monastery, but the place remained hidden from people for a long time.

The chronicle says that local hunters occasionally saw St. Mark praying at the hill slope upon three large stones. Two of such stones can still be found under the gigantic oaks of the monastery on the Holy Hill, and the third one is believed to have sunk under the ground.

St. Mark led an heremetic life in spiritual contemplation, mortifying his flesh for the sake of coming closer to God. He realized that contemplating our Lord was essentially an action of the Spirit, and a heavenly life. Everything will perish when a person dies, but contemplation of God will always be the eternal source of bliss and salvation.

When he died, his body was buried in a wooden log in the shape of a boat, which he had supposedly made himself. The log served him both as a bed and a coffin.

Venerable Iona, the founder of the Church of the Dormition, knew the place where the holy relics of St. Mark were buried. When the monastery was formed, his name was written down in the necrology book. St. Cornelius (Kornily) once doubted that the story about Venerable Mark was true and the record was valid, so he ordered the name removed from the necrology list. Suddenly he suffered a severe illness—blindness. He prayed, and finally realized what had caused his blindness. He asked to be brought to the coffin of the saint (apart from being blind, he also lost the use of his legs and arms) where he expressed deep regret for his former doubts and begged God for mercy. He left the cave healthy and strong.

Through the prayers of Venerable Mark, Lord Jesus Christ our God, have mercy on us. Amen.

From the Pskov-Pechery Bulletin, No. 12, 2013. Edited by OrthoChristian.com