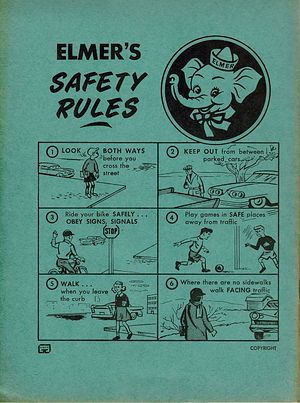 I remember Elmer. Elmer was an elephant, whose image adorned the backs of our notebooks when I was in public school, and whose face flew on a flag on our school flagpole. Elmer was “the Safety Elephant” whose rules we were encouraged to always remember (like an elephant, since “elephants never forget”). His rules consisted of such maxims as “LOOK BOTH WAYS before you cross the street” and “KEEP OUT from between parked cars”. There were four other rules also, complete with pictures to illustrate them, but you get the idea. If our school was accident-free, we were allowed to fly Elmer’s flag to celebrate this, but if a child was involved in a car accident we lost that right. Even now I can hear our school Principal’s voice coming over my school’s public address system to sorrowfully announce, “We lost Elmer”. The idea behind this educational initiative on the part of the grown-ups was that children, if left to themselves, would be heedless of the risks involved in traffic and would be hurt. Thus the grown-ups, under the persona of Elmer the Safety Elephant, ceaselessly inculcated the six safety rules to keep the children safe from danger.

Today’s young children are now in danger from a source other than traffic. I refer to the pandemic of pornography sweeping our land. In kinder gentler days, if a person wanted to view pornographic images he had to go to a place that sold them and ask for the magazine containing the images which was kept hidden behind the counter. One ran the risk of receiving cold disapproving adult glances, and perhaps even being reported to one’s parents. Now with the omnipresence of the internet, one can view such images in the privacy of one’s own home, or even with one’s friends at McDonald’s through an i-phone. The average boy first discovers pornography in grade five, between the ages of nine to eleven, which of course means that some boys discover it earlier than nine years of age. That means that these boys’ brains are spent marinating in a pornographic culture which distorts the relationship between men and women long before they have any meaningful relationships with women. It does not take much imagination to see how such a generation of boys growing up damaged in this way will be hampered when it comes to their own adult sexuality and be further hampered in their task of conveying a healthy view of sexuality to their own children.

We need help from Elmer. That is, as parents, grandparents, and adults with any responsibility for raising and influencing children, we need to warn them of the dangers of pornography in the same way as our parents warned us of the dangers of playing in traffic. Elmer gave us six simple rules to keep us safe. I suggest three simple rules, which should be pounded into the heads of our children with the same happy relentlessness in which traffic safety rules were pounded into ours. They are:

In giving these rules and setting these parental boundaries, we should make it clear that we are not giving these rules because pornography is a sin (though in fact it is) but because it is dangerous. The rules are given in the same spirit and with the same motivation as other rules such as “Cover your mouth when you sneeze”, “Wash your hands after handling food which might be contaminated”, and “Don’t run out into traffic”. It has nothing to do with spirituality or religion, and everything to do with simple safety. When a city faces a pandemic, we see health officials urging people to wash their hands, and people walking about the streets in medical masks. It should be the same with this pandemic. We take these precautions to keep our children safe from consequences that will follow them throughout their lives and have consequences for their children in turn. It is imperative that we remember the plague that surrounds us, even if (like most plagues) it is often invisible, and take steps to stay safe. Like an elephant, we must never forget.