Life is Blessedness! Selected sayings of St. Barsanuphius of Optina 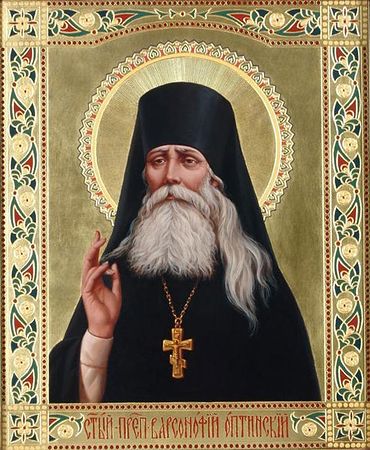 Life is blessedness! These words might seem strange. How can one call life blessedness when at every step one encounter failures, disappointments and grief? How much sorrow people endure. Life, people say, is labor, and often thankless labor—what kind of blessedness is there in this? And all the same I repeat: life is blessedness. Life becomes blessedness for us when we learn to fulfill Christ’s commandments and to love Christ. Then it will be a joy to live, a joy to endure the afflictions that come upon us, while before us will glow the ineffable light of the Sun of Righteousness—the Lord. All the Gospel commandments begin with the word, “blessed:” blessed are the meek, blessed are the merciful, blessed are the peacemakers … From this it follows, as a truth, that the fulfilling of the commandment offers people the highest happiness.

Elder Ambrose would say, “Monasticism is blessedness.” Indeed, that spiritual joy which a monastery imparts is so great, that after one minute of it one can forget all of life’s afflictions—both worldly and monastic ones. The devil works powerfully, wishing to distract people from serving God (and in the world he accomplishes this easily). In a monastery it’s more difficult for him to fight, and that’s why the spirit of malice hates monasteries so much and tries in every way to slander them in the eyes of inexperienced people. Meanwhile, I will not be sinning in saying that only the monastics can attain the highest blessedness. It’s possible to be saved in the world, but to be raised up to a height equal to that of the angels, to the highest spiritual creativity—is impossible in the world.

Fr. Macarius, Fr. Ambrose, Fr. Moses, and all of our Elders always said, “Be humble, be humble.” It’s like when St. John the Theologian, towards the end of his life, would only say, “Little children, love one another.” That’s how our Elders would repeat, “Be humble.” These two virtues, love and humility, are dependent upon one another, like warmth and light. As it’s impossible to imagine light without warmth, so it is here. I remember, Archimandrite Isaac would be walking along and he’d say, “Well then, Brother Paul, how are things?” “Glory be to God, by your holy prayers.” “Yes, you’ve got to be humble. Humility is the height.” I’d receive his blessing and he would move on. And so now I’m saying to you—be humble. Peace be unto you.

The spirit of evil, enflamed with envy against the human race, strives to lead everyone astray from the right path and actually does lead the slothful and the negligent astray.

Once the devil appeared in a physical form to a certain ascetic. The ascetic asked him, “Why do you attack the human race with such malice?”

“Why are you occupying our vacant places?” replied the evil spirit.

For their pride the evil spirits were deprived of paradisal bliss, and now people, because of humility, occupy their places! It sets above the snares of the devil.

A soul that hungers for the statutes and mercies of God is similar to a sunflower and strives for and reaches out for God. If it ceases to seek Him, it perishes. It’s essential in this life to sense Christ. Whoever has not seen Him here, will never see Him there, in the future life. But how can one see Christ? The way to this is the unceasing Prayer of Jesus, which instills Christ in our souls … And I earnestly beg you—banish all images from your head and heart, that there might be only one image there—Christ’s. But how do you attain this? Again, by the Jesus Prayer.

Many learned people, knowing a multitude of sciences, do not know their own souls at all and have no understanding of spiritual life. Such a person will appear at the “great examination” and will be asked, “Did you carry out the commandments of Christ and, if you did not carry them out, did you repent over this? Did you believe in the Lord Jesus Christ, the Only-Begotten Son of God?”

And this learned man, glorified on earth, will be manifest at that examination as a fool of fools. 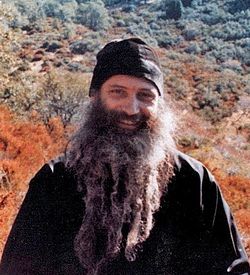 The face of a man who labors for the Lord expresses his spiritual progress. I once saw a bishop in church whose face involuntarily attracted my attention. I was reminded of the words of the Gospel: His face was as though He would go to Jerusalem (Luke 9:53). Truly, this bishop led an ascetic life and was proceeding unwaveringly towards the Jerusalem on high. On the other hand, the face of a depraved person expresses his dark spiritual disposition. But it’s especially sad to see that sometimes people of good soul regard life inattentively and live day after day without rendering an account for their actions, and perish.

Warring with the passions

My simple words are comprehensible to a five-year-old child, but the meaning of all of life is contained in them. Learn to war with your passions—this is very important, and even imperative. The best guide for you will be the Lives of the Saints. The world abandoned this reading long ago, but don’t conform to the world, and this reading will console you greatly. In the Lives of Saints you’ll find instructions on how to conduct warfare against the spirit of evil and remain the victor. May the Lord help you.

Go to God’s temple more often, especially when you’re in afflictions. It’s good to stand in some dark corner and pray and weep from your heart.

When a valve of the heart closes to the receptivity of worldly enjoyments, another valve opens for the reception of spiritual joys.

But how does one acquire this? First of all, by peace and love towards one’s neighbors: Charity suffereth long, and is kind; charity envieth not; charity vaunteth not itself, is not puffed up; doth not behave itself unseemly, seeketh not her own, is not easily provoked, thinketh no evil; rejoiceth not in iniquity, but rejoiceth in the truth; beareth all things, believeth all things, hopeth all things, endureth all things. Charity never faileth… (1 Cor. 13:4-8). Then, by patience. Who will be saved? He that endureth to the end shall be saved (Mt. 10:22). Also, by withdrawing from such sinful pleasures as, for instance, card-playing, dances, and so on…

Full joy does not occur in this life, where we see God only through a glass, darkly. This joy will begin yonder, beyond the grave, when we will see the Lord face to face. Not everyone will see God the same way, but each will see Him according to the measure of his own receptivity. In fact, even the vision of the Seraphim is distinguished from the vision of simple angels. One can only say whoever has not seen Christ in this life will not see Him in the next. The capability of seeing God is attained through work on oneself in this life.

The life of any Christian person can be depicted graphically in the form of an uninterruptedly ascending line. But the Lord does not allow a man to see this ascent; He conceals it, knowing human weakness, knowing that by observing his own improvement it would not take a man long to become prideful, and where there is pride, there too is a fall into the abyss. [Benjamin] Franklin thought up a horrible thing, proposing that people, on special little boards, make note of their successes of the day, of the week, and so on. In this way one can reach a state of terrible prelest, and tumble down into the abyss of destruction. 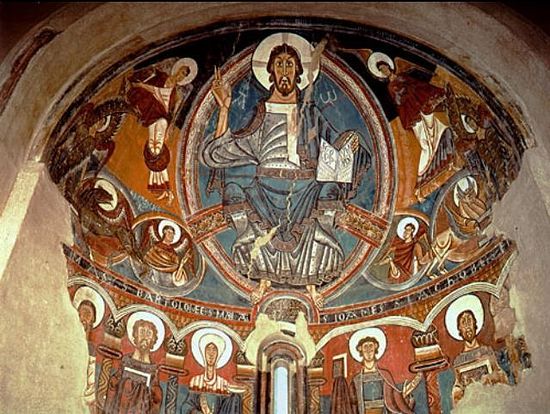 No, ours is a different path. We must all strive towards God, towards heaven, towards the East; but we must see our sins and weaknesses, confessing ourselves to be the first among sinners, seeing ourselves as beneath all, and all others as above us. However, this is a difficult thing; we all try to take notice of others—he's weak in this, but I'm not; I'm a good boy, better than him. One must struggle against this trait. This is a tough struggle, but without it it's impossible to see God. True, only a few people have seen God face to face, like St. Seraphim of Sarov, but we must all, without exception, strive, if only to see His reflection. If we believe in Christ and try, according to our strength, to fulfill His commandments, then even if only through a crack, we'll still see Him. Our vision of Christ and the vision of the saints can be compared to the ability of a man and an eagle to look at the sun. The eagle rises high above the earth, soars in the sky, and with unblinking eyes looks at the sun. But man's site is not adapted to this; man cannot bear the fullness of the light. Thus it is as well with Divine light—those who are adapted to this spiritual sight will see Him, and the rest will not.

A man who has attained dispassion receives, as it were, a diploma with the right to enter into the Kingdom of Heaven and becomes a converser with the angels and saints. A man who has not conquered the passions cannot be in Paradise—he’s detained at the tollhouses. But let’s assume that he has entered Paradise; he’ll be in no state to remain there, however—and what is more, he himself wouldn’t want to. As difficult as it is for an ill-bred man to be in the society of those that are well bred, so would it be impossible for a passionate man to be in the society of those that are dispassionate. The envious would remain envious, even in Paradise, and the proud, even in Heaven, would not become humble. People with opposing tendencies do not understand one another, and often bring harm to one another.

From Elder Barsanuphius of Optina by Victor Afanasiev (St. Herman of Alaska Brotherhood: 2000). Holy New Martyrs of Optina
And so, the newly re-opened Optina, which in centuries past had given the world many saints, now gave up three Martyrs. Their faith in God and love for all did not die with their murders, however. Averin killed monks Ferapont and Trophim while they were announcing to the world the Resurrection of Christ. Hieromonk Vasily was killed when he was going to the skete to hear confessions, but all faithful Orthodox Christians know that death is not the end, but the beginning.

Isaac1/29/2022 9:20 pm
Damjan, “charity” is a perfectly English word. This was used by the translators of the King James Bible to translate “agape” in 1 Corinthians 13, and it is preferable in some respects to modern connotations of the word “love.”

Editor1/28/2022 7:06 pm
Nina: The photo was inserted next to the paragraph beginning: "The face of a man who labors for the Lord expresses his spiritual progress."

damjan10/27/2017 3:36 pm
I have a comment for the translator. You used the word "charity" to translate "love" from chapter 13 1Cor. The catholics use 'charity" also, for example Italians "carita". The Serbs and English use "love". As I said it is very interesting, but we all have the general idea.
×