Monasticism is Not a Retirement Hobby 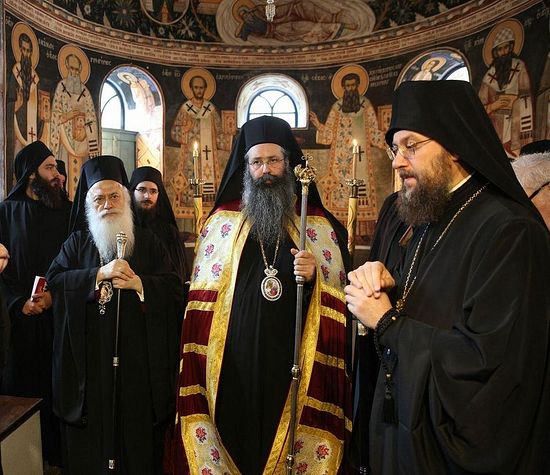 —Your Eminence, can you please share your experience with us? How did you decide to take the monastic vows?

—The Holy Ascension Convent on the outskirts of my native village of Chumalevo (the Transcarpathia region of the Ukraine) influenced my spiritual formation: during Khrushchev’s persecutions1 nearly all the nuns from around Transcarpathia were brought there. Their spirit of prayer and deep faith kindled like an icon lamp in my heart the desire to become a priest. By the way, our village produced many clergymen! I did not have any painful hesitation about what I should become in life. I well remember that moment when I realized once and for all that I would serve as a clergyman. This was during the service that was for the first time celebrated at our convent by Bishop Savva (Sabbas) of Uzhhorod and Mukacheve. I was in the fifth grade in school at the time. Subsequently I served as his subdeacon for several years despite the fact that I had to travel over 100 kilometers (c.62.3 miles) to Mukacheve each time. Because of that I often had to miss school. My mother was even called to the headmaster. But she never reproached me, knowing that my decision to serve at the Church altar was firm and serious. Mother quietly prayed at nights for blessings and success in my life. And the image of Bishop Savva—a stern monk, theologian and a good archpastor—played a key role in my choice of an educational institution—the seminary at the Holy Trinity-St. Sergius Lavra, which Bishop Savva had completed as well.

—What are the differences between the life of a bishop and life of a simple monk?

—The archpastoral ministry is a kind of obedience, too. It presupposes an ascetic life and full concentration on the acquisition of the grace of the Holy Spirit on the same level as simple monasticism, or even on a higher level. All the monastic vows apply to a bishop; he also has the even heavier burden of colossal responsibility before God through the Church (which entrusted him with the apostolic ministry) and through people who see in him a good shepherd and an irreproachable authority in the Church.

—Some people who are far from the Church claim that one can become a monk or nun only once he or she has raised children and has his or her career. What do you think of this opinion?

—The most widespread and fatal error is to think that your salvation can be postponed “Until later”. Those who in their youth live according to the flesh will most probably not be able to free themselves from passions in their old age, when it is most difficult to struggle with your lifelong habits and attachments. If a person has “established himself” as a family man, raised children and made a career, then it is not at all clear why he should join a monastery. Monasticism is, after all, not a retirement hobby! Monastic life is the uninterrupted burning of spirit, when you regard the entire world as nothing and all what you seek is the Heavenly Kingdom, “the one thing needful”.

—But what if we are talking about old age as the stage when one has gained experience and wisdom, which is so necessary for monks?

—Monastic life is not only for old people. Good spiritual experience is achieved through monastic labors of many years. Beyond a doubt, extremes should be avoided. If the best age for getting married is around 20-30, then the best age for taking up monasticism is 30-40. Of course, you can become a monk or a nun earlier, but in this case the degree of risk increases. In my view, those under the age of twenty should not hurry with taking the vows and should wait for a while.

—At what age were people tonsured as monks in ancient monasteries?

—In ancient times, believers prepared for monasticism a very long time. Nobody insisted that young people join monasteries. On entering a holy monastery, a man remained in the status of novice for a long time. If he got disappointed for some reason, he could return to the secular life.

—What should people do those who are longing for monastic life but have family responsibilities?

—You will not please God by leaving your family and joining a monastery. And it is no good to “dream” of monastic life, as dreaminess is demonic delusion, according to the Church Fathers. If the Lord blessed you to start a family, you need (with Christian patience and love) to carry this cross, which is no less heavy than the monastic one. It is only with the blessing of a spiritual father and by mutual consent of the spouses that you can join a monastery (or convent), and only provided that both spouses are drawn to monastic life and do not have a burden of raising children. And the main thing: you must give up all thoughts of monasticism unless you have love for prayer.

—Ascetics of olden days rejected this world not because they were guided by fear, but because they found it unattractive. For them the desert was a blossoming and joyful land of spirit, rather than a dark and damp grave (as many mistakenly believe). Blessed Diadochus of Photiki (Photice) in as early as the fifth century formulated the common rule for leaving the world: “We voluntarily renounce the sweet things of this life only when we taste of Divine sweetness in the integral feeling of fullness.” The genuine life is the acquisition of the Divine Grace, which enlightens and transforms. Its decline leads to death of the world and apocalyptic catastrophes as the visible signs of its agony.

Another aspect of monasticism is its special, incomparable service to the world: through the cleansing of one’s heart, prayer and ascetic life the Divine light enters into a human soul. This light is the core of the universe that transforms the whole of the world and revives dying mankind. Should the bearers of this spiritual light disappear, the world will inevitably die out. So the main purpose of taking up monasticism is to oppose this destructive power of sin.

—What can you advise those who want to devote their lives to monasticism?

—Such decisions as whether to take up monasticism can only be made after serious and sober reflection. And you need to have an earnest desire and be convinced (following a long period of testing) that this is really your vocation. I often have to deal with young people who are “at the crossroads.” Some of them usually say, “I think of taking up monasticism, but I am still hesitating.” In such cases I customarily say in reply, “As long as you have even a shadow of doubt, you should not take the monastic vows.” It is no good hurrying. It is better to wait at least three years and then see whether your enthusiasm has cooled off or not. An error may have fatal consequences: on breaking the vows, a person frequently cannot return to a normal life as he or she will have received a spiritual wound.

1 Nikita Khrushchev: First Secretary of the Central Committee of the Communist Party of the Soviet Union from September 14, 1953 – October 14, 1964. Although Khrushchev’s leadership of the Soviet Union was less brutal than his predecessor Stalin’s, he started another wave of persecutions against the Church that were less noticeable outside the country, but nevertheless relentless. He famously promised to show the “last Orthodox priest” on national television.
See also Living in the Real World
Fr. Stephen Freeman
We cannot live in the abstract and suddenly attend to the real. We cannot “care” and then turn to love. “To live” is an active verb. The passions of mass experience are something else. On Prayer of the Heart
Excerpts from Exploring the Inner Universe
Fr. Roman Braga
Attaining dispassion is not the result of personal effort, but it comes by the grace of God; so you must fall on your knees, see yourself as a sinner, and ask for God's help.

On Contemporary Monasticism
Interview with Archbishop Mark (Arndt)
Kristina Polyakova
One of the main problems faced by Christians and especially monastics today is that people are not used to restraining themselves, to enduring, or forcing themselves to do anything, to assume obligations, first and foremost to prayer. For some reason we stubbornly and persistently chase after sin, but good deed—alas!

The Christian Life is Monastic Life
Nathan Duffy
To a culture whose core values are self-fulfillment, self-satisfaction, and self-sovereignty, Orthodox monastic life appears as an affront and a scandal. What could be more contrary to our individualistic society which prizes comfort, ease, and “freedom” above all other concerns than a life of utter self-abasement, strict obedience, and striving after Holy suffering for Christ’s sake?
Comments

This Mathew from St. John the Baptist is Whippany. How do I get in touch with you? mwidunn /// gmail

Please go online and read, for example, Using "the" with the name of countries. A point well made there says:

This rule can also help you avoid offending some people. We sometimes use the without a common noun when describing a geographic or cultural region. For example, the South, the Outback. If you use the with a country whose name does not include a common noun, it sounds like you consider the country to be just a region. For example, the name “Ukraine” is correct (it does not include a common noun). If you say, “the Ukraine,” you imply that an entire nation is simply a geographic area, and Ukrainians may be offended.

Roman4/20/2016 11:11 am
Dear sirs, there is a big difference between "the Crimea", "the South", etc. and Ukraine. The former are parts of some larger political entity, and hence can be be written with the article. Ukraine, on the other hand, is a nation-state. Her government does not use the article; the UN, the US government, the New York Times all recognize Ukraine as an independent state and have stopped using the article "the" when referring to Ukraine. The usage you refer to was always political, because it was used to deny statehood and a separate identity to a nation and a people more than a thousand years old.

Dr. Michael Zurowski4/19/2016 7:39 pm
For Monsieur Mirchuk: The Gambia, the Argentine, the Netherlands, the United States, the Soviet Union, the Lebanon ....

Editor4/19/2016 11:41 am
Roman, this is a traditional usage that has no political meaning, other than the fact that Ukraine means "borderlands", and thus the English article. We would not say, go to borderlands, but to the borderlands. There are many places names that begin with the definite article in English, one of them being the Crimea. Here is an article on this from BBC: http://www.bbc.com/news/magazine-18233844.

Roman Mirchuk4/19/2016 11:16 am
Why do you constantly use the article "the" when referring to Ukraine. One does not write "the Russia", "the Georgia", the "Bilorus", therefore one should not write "the Ukraine" Ukraine is an independent country, with its own language, culture, history - she is not part of any other country or state, hence she deserves the respect due any other nation-state's name.
×