Conference on the forthcoming Pan-Orthodox Council at St. Tikhon's University 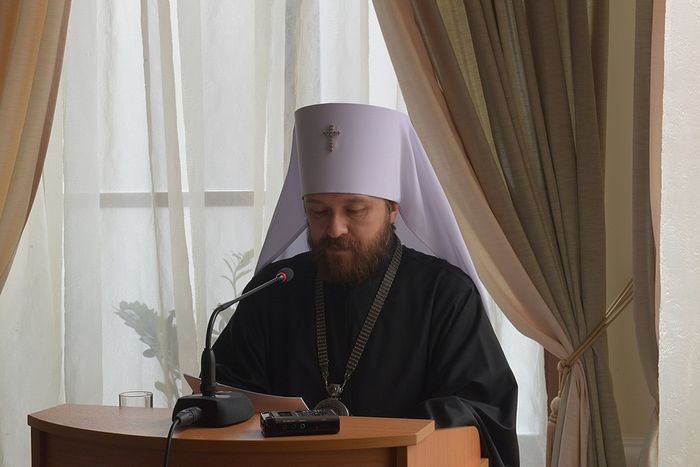 A scholarly conference, "The Pan-Orthodox Council: Opinions and Expectations," took place at St. Tikhon’s Orthodox University in Moscow on April 19 with the blessing of His Holiness Patriarch Kirill of Moscow and All Russia.

Taking part in the conference were many hierarchs, including Metropolitan Pavel of Minsk and Zaslavl, Patriarchal Exarch of All Belarus; Metropolitan Hilarion of Volokolamsk, chairman of the Moscow Patriarchate’s Department for External Church Relations; heads of other departments; superiors of monasteries; rectors and professors of theological schools and public figures.

In his welcoming address Metropolitan Pavel noted that the majority of bishops and priests understood the importance of the Council and added that the task of the conference was to answer questions and elucidate the meaning of the Holy and Great Council of the Orthodox Church.

"We have proposed from the very beginning of the preparations to convene all bishops. Thus, the decisions taken by vote would have shown the opinion of the majority. However, we were told that it was impossible to bring so many bishops together and so there should be a fixed number from each Church. At first it was twelve, later twenty, and finally twenty-four. It means that some Churches will be represented by all their bishops, but our Church, which has over three hundred and fifty bishops, will be represented by a small quantity. That is why we insisted on the decision that a Local Church rather than each member of the delegation will have a vote, thus avoiding the impression of a pan-Orthodox consensus.

"As to the documents discussed today at the conference, we would have liked to improve their wording. Believe me, we have exerted a lot of effort to make the documents better than they were, but many our amendments have not been adopted. There will be an opportunity to present amendments to the documents when His Holiness Patriarch Kirill will meet with other primates before the Council."

After a free discussion of all issues that were brought up, the participants in the conference adopted a final resolution which will be presented to His Holiness Patriarch Kirill of Moscow and All Russia. citizenofnextworld@gmail.com4/20/2016 10:26 pm
Since I discovered Saint Seraphim of SAROVE, I discovered I was lost, who
I was: western intellectually and theologically pagan all along, surrounded by Christianity for more than 2000 years yet never came closer to knowing God, Jesus became a myth an end year season retreat, spend consume and waste, reunion in fakery and sin, and sin was myth, if mentioned you are isolated and sanctioned, blasphemous and oustcast. Saint Seraphim of SAROVE electrocuted in an instant, overhauled in an instant, total metanoia sinking in, so suddenly ever since
I found myself that Jesus found me first, gradually I embarked on mission to seek the companionship of the Holy Spirit, and quest to acquire the knowledge that springs out the heart, by Him and in Him to challenge the Self and conquer the Sin, to decolonise of me, that was all along hidden me. Gratitude to the Treasury of Russian Spirituality.
Europe and West were never evangelised, true knowledge was/is hidden from us, it is of your duty, tasked to help and rescue, needed now more than ever. I see 100 year dream Revival will come from the Great East.
As for me I pray, one day I visit SAROVE and Moscow, then die. In Him.
×