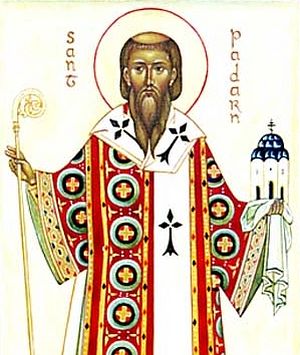 An icon of St. Paternus
St. Paternus (also known as Padarn) lived in the fifth-sixth centuries. Unfortunately, the early versions of his Life do not survive, and his later Life composed in about 1120 contains facts from Lives of several saints with this name. According to one version, he was born and studied in southeastern Wales, and, according to another version, the future saint’s native land was Brittany. Soon after Paternus’ birth his pious father with his wife’s consent moved to Ireland to lead a solitary life in prayer. The mother raised Paternus in great piety.

When Paternus grew up he decided to follow in the steps of his father and, obtaining his mother’s permission and blessing, he set out to Wales together with a group of other young ascetics seeking the solitary life. In Wales the saint acquainted himself with his relative, St. Samson, with whom he became spiritual friends. The ascetic met other prominent mentors of the Welsh Church of that period and always eagerly heeded their spiritual advice. Paternus was possibly trained for some time at the famous Llanilltud Fawr monastic school founded by St. Illtyd; at approximately the same time he established his first church on the seashore. St. Paternus started to withdraw for solitary prayer. But the saint was destined to lead the life of a hermit for only a short time: soon, together with other monks, Paternus with the blessing of spirit-bearing elders founded the great Monastery of Llanbadarn Fawr (“the Great Monastery of Padarn”) near to Aberystwyth in the former county of Cardiganshire, which is now Ceredigion. Some 120 monks lived in this monastery under St. Paternus. Paternus was most probably not only the Abbot of Llanbadarn but also a bishop at the same time. 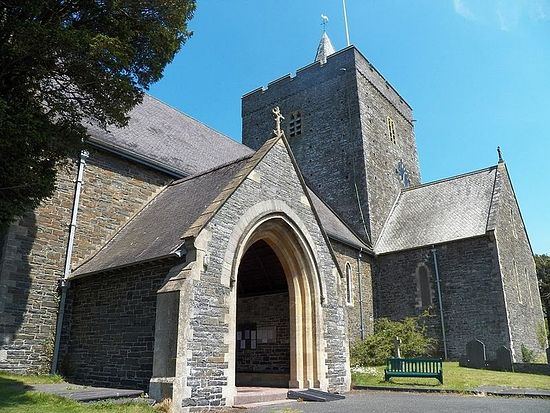 Church of St.Paternus or Padarn in Llanbadarn Fawr, Ceredigion

The saint was noted for his gift of inspired speech, love, compassion, mercifulness and humility. On making Llanbadarn Fawr the center of his mission, Paternus successfully enlightened the neighboring districts of Wales. The venerable father was Abbot of Llanbadarn for over 20 years, his community becoming one of the most celebrated centers of monastic life in line with Mynyw (Menevia in Latin) and Llandaff. St. Paternus was himself for a long time venerated as one of the founding fathers of Welsh monasticism and the most illustrious saints of this land. He staunchly opposed paganism, which at that time was still practiced by the rulers of some neighboring small kingdoms in Wales. The saint tirelessly preached to them the Good News of Christ, not losing hope for the enlightenment of pagans and their eternal salvation. For his energetic labors toward the eradication of heathenism the holy man suffered much from slander, as pagan chiefs used to malign this innocent man. Thus, once one unrighteous king accused St. Paternus of stealing numerous royal treasures. According to tradition, the innocence of the saint was proven when he put his hand in a cauldron with boiling water and took it out safe and sound. 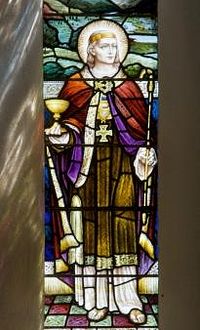 Stained glass image of St. Paternus at Llanbadarn Fawr church (photo by Martin Crampin)
This zealous man of God also built many churches in Wales both in the western and eastern regions of this country. He also established several monastic communities outside Llanbadarn Fawr, to which he moved some of the most experienced monks from his main center. According to one legend, once St. Paternus visited Ireland where he managed to find his father-ascetic and to converse with him. Another legend relates that Paternus together with Sts. David of Mynyw and Teilo of Llandaff once made a pilgrimage to the Holy Land after an angel had appeared to David and ordered him to do it. Early traditions tell that the last meeting of the two relatives, Paternus and Samson, took place in Cornwall where Samson labored for some time before travelling to Brittany and becoming Abbot of Dol there. It was said that St. Paternus, who had only one shoe on, as he was so gladdened by the news that the great saint Samson was waiting to talk with him that he left everything and, without putting on another shoe, rushed towards Samson to meet him. Soon after that Samson left for Brittany forever.

According to some traditions, St. Paternus, persecuted by a pagan chieftain, closer to the end of his life may also have moved to his homeland of Brittany, but the majority of historians nevertheless hold the opinion that the saint ended his days in Wales. According to the Welsh tradition, after his repose St. Paternus was buried together with many other saints on the island of Bardsey, while the Breton and less genuine tradition claims that the final years of his life Paternus served as a bishop in Brittany, reposed in the Lord in the Land of Franks and was buried in the Breton land. 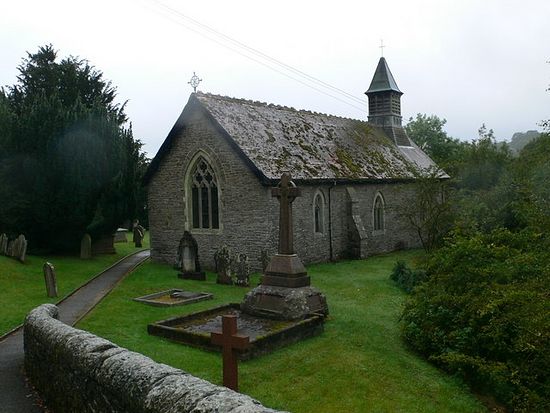 In the eighth century the Diocese of Llanbadarn (founded either by Paternus himself or by his disciples after his death) merged with that of Mynyw (Menevia), and the monastery of St. Paternus existed for many years afterwards—till the twelfth century. For a long time Llanbadarn Fawr was one of the largest parishes of Wales (now it is believed to be the largest parish church in midwestern Wales). Llanbadarn was a renowned center of learning; it had its own scriptorium, and in about 1079, the famous Psalter of Llanbadarn was produced there. It is considered that Asser, a learned advisor of the Holy King Alfred the Great and later a bishop, studied in Llanbadarn as a young man. Also Sulien, a famous eleventh-century scholar and Church figure, was for some time Abbot of Llanbadarn. This monastery was attacked by the Vikings in the late tenth century but was rapidly restored.

In the twelfth century it was briefly a cell of the Gloucester Abbey of St. Peter with Benedictine monks, after which it ceased to be a monastery and was governed by married priests, known as secular canons. In the second half of the sixteenth century William Morgan, the first translator of the Bible into Welsh, was vicar of this church for some while, and a copy of his Bible is kept in the present church. Today the very large village of Llanbadarn Fawr has a huge church dated to the mid-thirteenth century, dedicated to its founder St. Paternus—and it stands on the site of his original monastery. Pilgrimages are organized to this holy place to this day. Two rare Celtic crosses of the ninth or tenth century are kept in this church (as part of its exhibition in the south transept).

In the twentieth century, a new chapel dedicated to St. Paternus was built in the south transept. The transept also houses a museum dedicated to the history of this important ecclesiastical center down the centuries and its patron-saint. There is also a separate room devoted to Sulien, and lines from the poetry of the renowned medieval Welsh poet Dafydd ap Gwilym, who was associated with this parish, are cited there. This church is also famous for its rich musical traditions; its oldest surviving attribute is a twelfth-century font. St. Paternus is commemorated in sculpture and stained glass along with Sts. David and Teilo. The church underwent major restoration work in the Victorian era, as a result of which most of the medieval fittings and features were lost forever—although the restoration saved the church building from falling into ruin after a period of neglect. 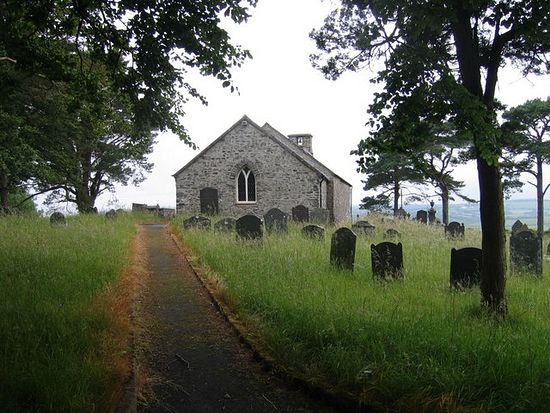 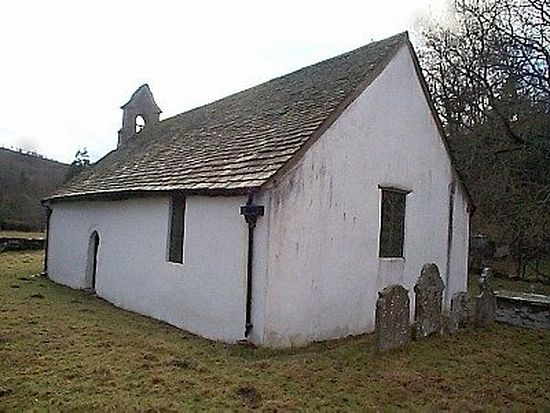 Church of St. Paternus or Padarn in Llanbadarn-y-Garreg, Powys (photo by Phil Jones) 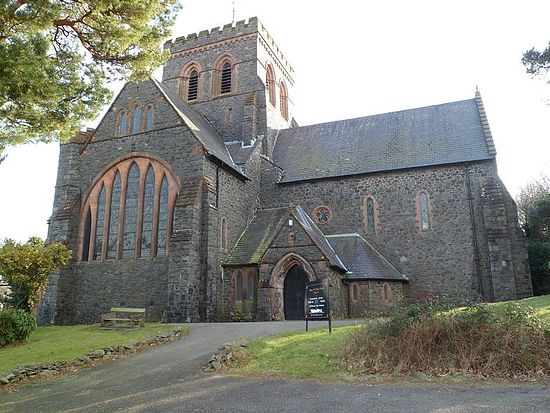 Church of St. Paternus or Padarn in Llanberis, Gwynedd

Many places and toponyms bear the name of this saint. Thus, the lake of Llyn Padarn in the picturesque mountainous region of Snowdonia in North Wales is named after our saint. Remarkably, the churches of St. Paternus which can be found in the east and the west of Wales are closely connected with old Roman roads, which indicates this this saint’s link to Romano-British Orthodoxy (the main form of his name, Paternus, is also Latinized), and not only Celtic Orthodoxy.

Apart from in Wales and Brittany, St. Paternus is also venerated in some regions of England, especially in the West Country (Cornwall, Devon, Somerset) where his name was included in the early calendars of a number of churches.

Holy Father Paternus, pray to God for us! Saint Teilo of Wales
Commemorated: February 9/22
Dmitry Lapa
The veneration of St. Teilo throughout Wales and in Brittany was widespread; many churches across Wales and in western England were dedicated to him. His late Life was composed early in the twelfth century by the cleric Geoffrey of Llandaff. Holy Hierarch Dyfrig (Dubricius) of Wales
Commemorated November 14/27
Dmitry Lapa
St. Dyfrig, also known by the Latin name of Dubricius, was one of the founders of Orthodox monasticism in Wales. Venerable Illtyd, Abbot of Llantwit Major in Wales and the Teacher of the Welsh
Dmitry Lapa

Venerable Illtyd, Abbot of Llantwit Major in Wales and the Teacher of the Welsh
Commemorated November 6/19
Dmitry Lapa
St. Illtyd, who knew very well both the Old and New Testaments, all kinds of philosophy, and other sciences, and was one of the most learned figures of his age, was probably born in the first half of the fifth century. Venerable Cadoc, Abbot of Llancarfan in Wales
Commemorated: January 24/February 6 and September 25/October 8
Dmitry Lapa
St. Cadoc (c. 497 - c. 580) was the founder of the famous monastery of Llancarfan (c. 518) in the present-day Vale of Glamorgan in Wales. This monastery was to become one of the best-known in Wales, as well as a great centre of learning.
Comments

Jen Cairns8/10/2017 7:17 pm
I found Dimitry Lapa's words about St Paternus very interesting. I am researching the parish of St Patrick, Pencarreg, Carmarthenshire for several reasons... I am retired (aged 76). I have been trying to discover why this church is called St Patrick when this saint has no other connection with the parish as far as I have found. The senior priest in the Pencarreg area suggested that maybe the name is a mishearing or misinterpretation of Paternus or Paterninus.. a farm near the church has a name which is possibly similar to Paternus...) I was wondering if Dimitry Lapa would be kind enough to let me know where or how he found the text or the suggestion that this church was originally built by St Padarn/St Paternus. And also, if possible where any text can presently be seen by me.

I am not a Catholic, but I was for four years a pupil in the St Padarn's convent school in Aberystwyth, and loved every minute... later in life I got a degree in Theology and Religious Studies in the University of Wales, Lampeter which is about three miles away from Pencarreg.

The main reason for this question is that the parish is about to start to try to raise money for urgent repairs for this lovely old church, and part of the campaign hopes to include a pamphlet on the history of the church... your help and assistance would of course be fully acknowledged... Diolch yn fawr (thank you...)
×