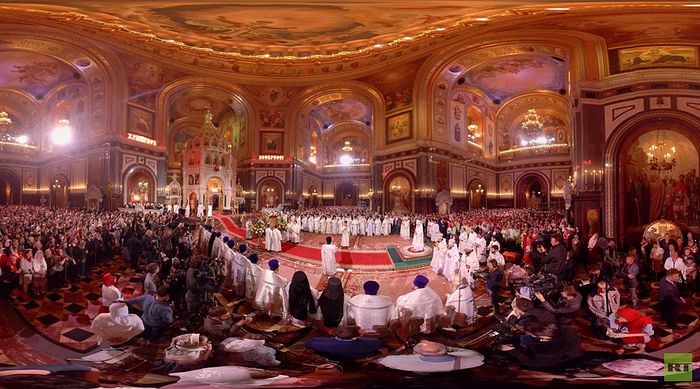 As Orthodox Christians across the world celebrated Easter on May 1, RT got an exclusive chance to film the grand midnight service at Moscow’s Christ the Savior Cathedral in the first ever 360-video from the biggest church in Russia.

The ceremony, attended by some 5,000 people, was led by the head of the Russian Orthodox Church Patriarch Kirill. Prior to the liturgy he lit candles with the ‘Holy Fire’ delivered from Jerusalem’s Church of the Holy Sepulchre.

The Christians celebrate Easter after the Holy Week to commemorating the day they believe that Jesus Christ was resurrected. Catholics and Protestants celebrated Easter in April in accordance with the Gregorian calendar, while Orthodox Christians, who use the Julian calendar, celebrated it on Sunday. A short history of Christ the Saviour Cathedral in Moscow
Ryan Hunter
"After over 40 years of initial construction paid for by donations from across the Russian Empire and with imperial patronage, the cathedral was first consecrated on 26 May 1883 in the presence of Emperor Alexander III and senior members of the Imperial Family along with numerous Church and foreign dignitaries." On This Day: Cathedral of Christ the Saviour Founded in Moscow
Paul Gilbert

On This Day: Cathedral of Christ the Saviour Founded in Moscow
Paul Gilbert
On September 22 (O.S. September 10), 1839 the Cathedral of Christ the Saviour was solemnly founded by the Metropolitan of Moscow Filaret on the Alexeevsky hill in Moscow to commemorate the 25th anniversary of the end of the Patriotic War and storming of Paris in March of 1814.