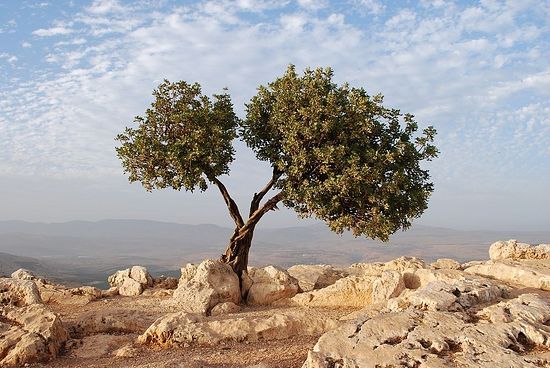 Is the Church the new Israel? This idea has been disparaged as "Replacement Theology." And how are we to understand the the term "New Jerusalem"? Is it Heaven? The Church? A literal city? All three? Fr. John Whiteford looks at the Scripture and patristic writings on the New Jerusalem.

St. Paul’s teaching in Romans 11 is clear that those Jews who rejected Christ are like branches cut off from the olive tree, which represents the people of God—and that gentile converts are like wild olive branches that have been grafted on to that same tree. The Church is the Israel of God (Galatians 6:16), the Israelites formed the Church of the Old Testament, but the New Testament Church is in continuity with the old. However, Romans 11 is equally clear that there is still a future in God’s providence for those who are the physical descendants of the Old Testament Israel, who rejected Christ and so have been cut off from the Church, but who will one day be saved. And so we do speak of the Church as the new Israel, but this does not mean there is no sense in which we can still speak of the Israel according to the flesh.

We do not accept the notion of some Protestants who teach that there is still a separate covenant for the Jews, and that they may be saved by the Old Covenant, while Christians are saved by the New. Nor do we believe that the descendants of those who rejected Christ have some special claim on the Holy Land that entitles them to steal land from Arab speaking Christians, many of whom are no doubt descended from those Jews that embraced Christ. Christians are children of Abraham in the truest sense, and as such are the true heirs of God’s promise to him:

Know ye therefore that they which are of faith, the same are the children of Abraham. And the scripture, foreseeing that God would justify the heathen through faith, preached before the gospel unto Abraham, saying, In thee shall all nations be blessed. So then they which be of faith are blessed with faithful Abraham(Gal. 3:7-9).

Because we do not equate the modern state of Israel with the Israel of the Old Testament, some Protestants attempt to argue that this constitutes anti-Semitism, but we reject this claim. Furthermore, I would argue that this abuse of the label of anti-Semitism in an attempt to defend even the most indefensible actions of the state of Israel only cheapens the term, and has the effect of providing greater credibility for real anti-Semitic voices.

As for the term “New Jerusalem,” we find this phrase in Revelation 21:2:

And I John saw the holy city, new Jerusalem, coming down from God out of heaven, prepared as a bride adorned for her husband.

Here are examples of what the Fathers say this phrase means:

“The heavenly Jerusalem is the multitude of the saints who will come with the Lord, even as Zechariah said: Behold my Lord God will come, and all his saints with him [Zechariah 14:5 (Septuagint)].”[1]

“By Jerusalem he symbolized the blessed destiny and dwelling of the saints, which he figuratively calls Jerusalem both here and in the following passages[2]

“The city is constructed of the saints concerning whom it is written, Holy stones are rolled upon the land, [Zechariah 9:16 Septuagint] and it has Christ as its cornerstone. It is called a “city,” since it is the dwelling place of the kingly Trinity—for [the Trinity] dwells in it and walks in it, as he promised—and it is called “bride,” since it is joined to the Lord and is united with him in the highest, inseparable conjunction.”[3]

We find something similar in Hebrews 12:22 (But you have come to Mount Zion and to the city of the living God, the heavenly Jerusalem), as well as Galatians 4:26 (But Jerusalem which is above is free, which is the mother of us all). In context, both of these passages are contrasting the heavenly Jerusalem with the Old Covenant and those refusing to embrace the New Covenant.

And so, from these passages, and from what the Fathers say about them, I think we can say that the New Jerusalem refers to the Church, to all the saints in heaven, and to heaven itself. The New Covenant
Fr. Stavros Akrotirianakis
The Old Covenant called the people to moral living. This was done through obedience to commandments. The New Covenant calls us to eternal life. We honor this covenant through partaking of Christ in the Eucharist. Reading Beneath the Words
Fr. Stephen Freeman
The relationship between Old and New Testaments is much less straightforward than most people realize. Why do Christians not Celebrate Jewish Feasts? Is the Orthodox Church “Supersessionist”? On the Saints of the Old Testament
St. Gregory Palamas

On the Saints of the Old Testament
St. Gregory Palamas
Impossible to recount is Christ’s descent according to His divinity, but His ancestry according to His human nature can be traced, since He who deigned to become Son of Man in order to save mankind was the offspring of men. And it is this genealogy of His that two of the evangelists, Matthew and Luke, recorded.
Comments

Paul V W7/14/2019 1:54 pm
In terms of inaugurated and consummated eschatology, what is now the church will then be the New Jerusalem.

Tobias5/11/2016 12:25 am
We must also open our eyes and leave the illusion behind that Arab speaking Christians would be in control of the Holy Land if the modern state of Israel did not exist. Arab speaking Christians would be under the brutal control of an Islamic government and Sharia law. Christians would not truly own land, homes or be considered 1st class citizens under Islamic rule. They are stuck between a rock and a hard place. Convert, die or 2nd class citizenship under Islam...or suffer humiliation and strict Marshall law type conditions with a modern state of Israel because their Muslim neighbors like to murder people in the name of their god.

It is ironic that Western colonialism and the delusional idea that led to the creation of the modern state of Israel are probably the only reason that there is a remnant of Arab speaking Christians left and that the Holy Land Churches have not been converted to Mosques.