The Brotherhood of Moses the Black 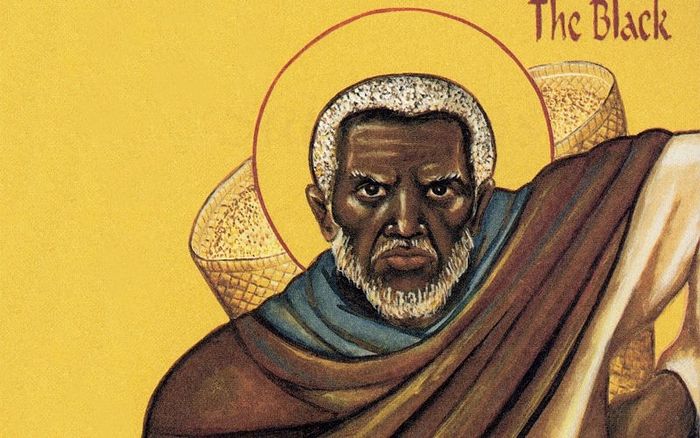 When Karl Berry walked into an Orthodox Church for the first time in 1983, he saw icons of black saints. He and his wife were living in Atlanta at the time, and visiting a friend when they stopped by. He would never forget the day he first encountered St. Moses the Black and St. Cyprian of Carthage.

“My first thought was that these were just some very liberal white people who were doing some outreach and trying to appeal to black people,” Berry, now known as Father Moses, told The Daily Beast. The priest told him that they were actually replicas of third century icons, linking back to a Christianity that originated hundreds of years ago.

“And that was my first introduction to the universal church, not just in theory or in words but in actual depictions of saints from different countries who were always part of the development of Christendom,” he said.

Berry is one of a small but growing number of African Americans moving from Protestant churches to Orthodox Christianity, inspired by the Church’s long history in Africa, claim to authenticity, and reverence of black saints. Together, they’re transforming a tradition largely tied to white ethnic groups in America, and reaching out to others in the African-American community with their message.

Berry is a third-generation African Methodist Episcopal Church pastor’s child, and says he’s always “had a love for Jesus.” But as a young man he became disillusioned with the Christianity he’d been exposed to and drifted from the church, leaving home at 15.

“It wasn’t the church that I was looking for,” he said. “Their whole life depended on their relationship with other-worldliness.”

Berry was baptized again with the church’s ancient traditions. Soon, he said, he approached a bishop he knew in Chicago and asked whether he might ordain him. The process typically takes time and education, but Berry said the bishop asked to have a conversation with him.

“And 20 minutes later he said, ‘Now we should set a date,’” Berry said. “That’s not the normal way. Perhaps he saw potential.”

The transition, he said, felt natural and easy, compared to the struggles his family had been through.

“My great-grandfather was a slave. We had his slave chains and neck irons in our house. We had quilts from the underground railroad in our house,” he said. “When I look at the struggles that some of them have gone through, I’m embarrassed by my own struggle.”

Eastern Orthodox Christianity is the product of a schism within Christendom in 1054, which separated it into the Catholic Church in the West, and the Orthodox in the East. The two sides mutually excommunicated each other over a variety of long-standing differences.

Catholicism would continue to dominate the West, with the Protestant Reformation later sprouting a variety of other denominations. Meanwhile, the Orthodox Church blossomed into the Russian Orthodox Church, Greek Orthodox, and others.

While Berry says he is one of few black Americans to be ordained an Orthodox priest—the first is believed to be Father Raphael Morgan, ordained in 1907—the church has a long history in Africa, particularly Ethiopia, and draws growing numbers of people of color in the U.S.

“I think that the generation of younger people are looking for something more substantial. They don’t want necessarily a feel-good religion,” Berry said. “They want something they know will have to be a little difficult in order to be transformative.”

Last year, the Pew Research Center foudn growing racial diversity across all Christian denominations, and Orthodox Christianity in particular. Although practitioners may often associate themselves with particular ethnic groups—like Greek Orthodox, or Russian Orthodox, for example—the number of people of color ascribing to the church went up by six percentage points between 2007 and 2014, from 13 to 19 percent.

Mother Katherine Weston, an Orthodox nun, told The Daily Beast that outreach to African-American communities began in the early 1990s with a series conference on the ancient church and the African-American experience which continue to this day. Eventually, Berry and some other conference attendees founded the Brotherhood of Moses the Black in 1997 when he lived in St. Louis. The city was seeing an influx of Orthodox refugees from Africa who lacked support networks, and the Brotherhood sought to provide them with aid and community.

Berry said the focus expanded to outreach to the larger black community in the area, to connect them with an ancient church they may have never known. He hoped this would give them a sense of belonging and rootedness, he said.

“Our tradition does not begin with slavery. It’s a part of it, and it’s a major part of our tradition in this country. But it also began with our church in Africa. And people need to know that,” he said. “If you don’t know anything about your heritage, you run the risk of not being too stable.”

For others like Weston, the Orthodox Christian nun, it was the church’s absence that made an impact. Weston, who was raised Episcopalian, told The Daily Beast that she was drawn to the fact that the Orthodox church was not involved in the Atlantic Slave Trade.

“One of the things that has attracted me to Orthodoxy as an African American is that it has no history in the slave trade,” she told The Daily Beast. “The other thing is that it was one of the first kinds of Christianity to reach the continent of Africa, and not in the context of colonialism.”

Like Berry, she grew up in a family of ministers but left the church as a teen. Her interests in music and iconography (Weston is a painter) drew her to informal vespers services held by an Orthodox neighbor in the 1970s, when she was in graduate school, though she didn’t yet begin attending a church.

“But it did plant a seed of love for that form of worship, even though I’d only seen it partially,” she said. She formally joined when she later worked at a homeless shelter, where many of the other staff members were also exploring the church.

When she became a nun, she went on to live in a monastery in Northern California, and since 1992, she’s been in Indianapolis, overseeing a small community of sisters in the Serbian church and running a small therapy practice a few days a week.

“I’m in a very ethnic church,” she said. “It’s very wonderful. They understand what it is to have an ethnic identity. Our mutual understanding have increased over the years so that I feel very much at home when I attend the actual parish church.”

And even in the ethnic church, outreach to others has grown over time. There was very little English-language material and outreach to Americans before the 1980s, Weston said, because the ethnic groups were trying to keep their own ethnic and religious heritage alive. “Now, there’s a lot of material that’s come into English.”

“African Americans tend to still be very much people of faith,” Weston said. “It’s not just something you do on Sundays. it’s something that embraces and supports the whole life.”

Several hundred people attended the latest Moses the Black conference in October, Berry said, which was held to inform people and to connect those who might sometimes feel isolated within the church.

But they weren’t all black—in fact, the attendees were about evenly split, and many of them were young.

“They really don’t suffer the same way that my generation did with race,” Berry said. To be Black and Orthodox: Part of my Story
John R. Gresham, Jr.

To be Black and Orthodox: Part of my Story
John R. Gresham, Jr.
I have taken my African-American identity to the table where Moses the Black speaks with John Chrysostom. I stand with Ephrem the Syrian and Cyprian of Carthage. I take from the chalice of Ireland’s Patrick and Egypt’s Mary. Conference celebrates African roots of Christian Orthodoxy
The Livonia woman, who was raised a Missionary Baptist and converted to Lutheranism, visited an Orthodox Christian Church one day several years ago and watched as white worshippers kissed the image of a dark-skinned man. It was the feast day of St. Moses the Black and the congregation had lined up to venerate his icon.
Comments

ANTONIOS HATZILERIS 5/16/2016 3:17 pm
What a great insparational story. Where in Virginia is the church located? I would love to visit.