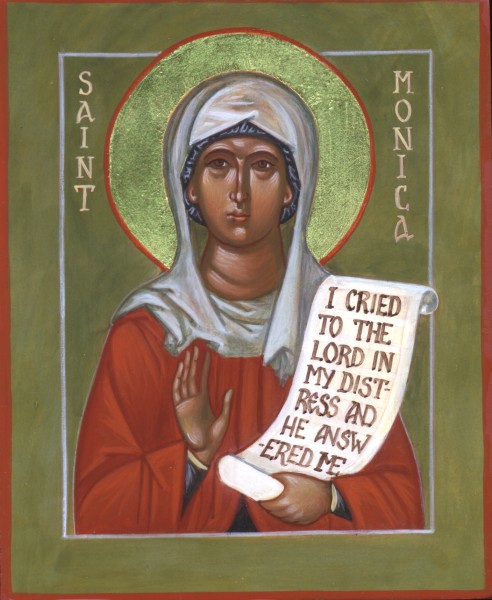 For the unbelieving husband is sanctified by the wife (1 Cor. 7:14)

If the reader knows anything about St. Monica, it is that her tearful and persistent entreaties before God succeeded in bringing her son back to the Christian faith after he had fallen prey to fashionable philosophies and fleshly temptations—a fact to which Blessed Augustine gratefully and eloquently attests in his Confessions. For mothers who try hard to instill the Christian faith into their children, only to have them veer off on some wayward and spiritually perilous course, St. Monica is an encouraging example. She is alike instructive as a model of wifely forbearance, credited with the conversion of her very difficult husband—a fact less well known but equally deserving of attention.

St. Monica was born in 332 in or near the North African town of Tagaste, some forty miles from the port city of Hippo. Her parents were native Africans, related ethnically to present day Berbers, and were devout Christians.

In addition to the careful nurturing of her parents, Monica benefited as a child from the vigilant attention of an elderly nurse. An excellent Christian and respected by her heads, she disciplined her charges wisely if sometimes inclined towards "holy severity." The entire household was imbued with a rare atmosphere of Christian piety, and it is not surprising that Monica grew to be a sober and virtuous maiden with a well-developed habit of prayer. One would have expected her to consecrate herself wholly to God in the monastic life, or to become united to a like God-fearing and virtuous husband. Instead, as soon as she reached marriageable age, she was betrothed to a pagan, a man of choleric temperament and dissolute morals. One wonders how Monica's parents could have consented to such a marriage for their daughter, after having taken such pains for her Christian upbringing. Surely they were mindful of the Apostle's injunction: Be not unequally yoked together with unbelievers (2 Cor. 6:14). Unfortunately, many parents are never so blind as when arranging, or approving, the marriages of their children.

Patricius was a native of Tagaste, and twice Monica's twenty-two years. While there is no precise information about his background, it is probable that he came from an old, noble family, more prominent than Monica's. At any rate, this is the supposition of Blessed Augustine's ancient biographers, who could find no other explanation for such an unequal union. In fact, Patricius was not wealthy. It is true, he was a city administrator, but at that time anyone who owned more than seventy acres of land was obliged to hold such a position. Patricius was not without generous qualities, but these were largely dormant and became animate only later, in response to Monica's unflagging prayers and exemplary Christian behavior.

Whatever Monica felt towards her betrothed, she was obedient to her parents' will, consoling herself with the thought that here was a lost soul that was being entrusted to her, and she determined to sacrifice herself to the task of guiding this soul onto the path to salvation. Nevertheless, she could not have anticipated just what this sacrifice was to entail. In the days and weeks after the marriage, she became increasingly and painfully aware of the abyss that lay between her and her husband. He was annoyed by her prayers; he found her charity excessive; he could not understand her desire to visit the sick; he could not fathom her love for slaves. At every step in her Christian walk, Monica met with countless hindrances. Her case was far from unique and is well described by Tertullian in his treatise To His Wife, wherein he speaks of the difficulties a Christian wife endures at the hands of an unbelieving husband:

When it is time to go to church, the husband takes his wife to the baths; if there are fasts to be observed, the husband arranges for a banquet; if she wishes to visit the poor, no servants are available to accompany her. And will such a husband allow her to be absent all night long for the paschal solemnities? or permit her to attend the Lord's Supper, which they disavow?

As a young bride who had spent her life in a Christian atmosphere, where the very purpose of existence centered upon the love of God and neighbor, Monica suddenly found herself in an alien environment. Her husband, although he loved her in his own way, was a stranger, not a soul-mate; and her cantankerous mother-in-law, who lived with them, only reinforced his fits of anger with her own. These were prompted by the slanders of the maidservants, whose animosity towards their young mistress intensified an already painful loneliness. Even more grievous was Patricius' infidelity, for what wife, especially one raised, as Monica was, with high standards of chastity and marital devotion, can countenance the defilement of her marriage bed? 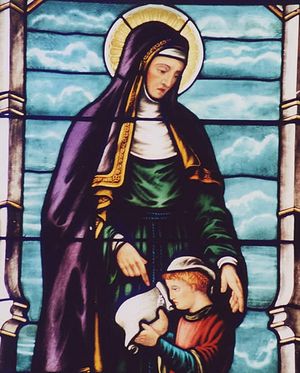 St. Monica with a young St. Augustine
Prayer was Monica's strength, and the joys of motherhood further served to mitigate the bitterness of her circumstances. She bore two sons and a daughter, whom she nurtured in the faith with great diligence and ultimate success. As a boy, writes Blessed Augustine, "I already believed, and my mother and the whole household, except for my father. Yet he did not prevail over the power of my mother's piety in me, that as he did not believe, so neither should I. For it was her earnest care that Thou my God, rather than he, shouldst be my father" (Confessions 1.11). To Monica's great sorrow, Patricius would not have the children baptized. And when Augustine began to show promise of intellectual brilliance, Patricius sent him for higher education to Carthage, where the youth gradually fell prey to youthful passions.

As young as she was, Monica bore her cross with remarkable fortitude and spiritual maturity. She realized that her husband's weaknesses and moral failings stemmed from the fact that he had not yet been enlightened by the Gospel, that he lacked the grace of God. She shed bitter tears in his absence, but she knew that a man who did not love God could not be expected to be constant in his affection towards one of His creatures. With firm hope, she prayed that God Himself would grant her husband faith and love for Him, which alone are able to inspire a man with the desire to lead a chaste life.

Monica knew that reproaches were counter-productive, and she tamed her husband's violent temper by her meekness and devotion. Other women, who endured blows from their husbands, asked Monica how it was that Patricius, whom they knew to be irascible, did not once strike her. Monica replied that instead of blaming their husbands they should blame their tongues, for "she had learnt not to resist an angry husband, not in deed only, but not even in word." (9.9)

Regardless of Patricius' religious indifference and often unchristian behavior, Monica was very attentive towards him, "whom she, the better obeyed, therein also obeying [God] Who hast so commanded" (1.11). Compelled at times to contradict him and to go against his will in what concerned the Faith, she was all the more meek and submissive to him in other matters. And although superior to her husband in education and moral qualities, she made every effort not to reveal her advantage. She firmly believed that if the light of the Gospel was reflected in all her actions, then Patricius would eventually be persuaded of its power and its truth, and would submit to it more readily than if she attempted to persuade him with rational arguments. Indeed, her Christian conduct acted like a soothing balm on Patricius' soul, and, without his realizing it, drew him gradually closer to the Faith. As St.John Chrysostom wrote half a century later in his homily On Virginity, the believing wife "will be able to save her husband by putting the Gospel into practice." This is precisely what St. Monica did, winning over not only her husband but also her mother-in-law.

This fruit of her prayers, of her long-suffering, and of her steadfast application of the Gospel precepts took a long time to mature. It was only after sixteen years that Patricius was baptized. Nor did Monica enjoy for long her husband's company at the Lord's Supper, for he died only a year later, in 371. Nevertheless, her aim had been to sanctify her husband for eternal life, and, by the Grace of God, this she had achieved. It remained for her to extricate her wayward son form the delusion of the passions and from the Manichean heresy. This required another fourteen years of persistent prayer. When at last his heart, too, was converted, her joy was complete.

Monica was present at Augustine's baptism at the hands of St. Ambrose in Milan at Pascha, 387, and they were returning to Africa when they stopped to rest in the port city of Ostia. One evening they had a long conversation in which she said to him, "Son, for mine own part I have no further delight in anything in this life. What I do here any longer, and to what end I am here, I know not, now that my hopes in this world are accomplished" (9.10). Indeed, she had excellently fulfilled her purpose in life, and, after a brief illness, God took her that she might receive her due reward with the saints in His eternal kingdom. She was buried in Ostia, a fact verified by the inscription on a stone tablet discovered there by archaeologists in 1946.

For centuries, St. Monica was revered in the Roman Catholic Church as a patroness of married women. It is time that Orthodox women became more closely acquainted with this exemplar of womanly virtues, whose prayers are especially to be invoked by those with wayward children and by wives desirous of sanctifying their unbelieving husbands.