Pure Love and Devotion for Christ

Sermon for the Sunday of the Myrrh-Bearing Women 2016 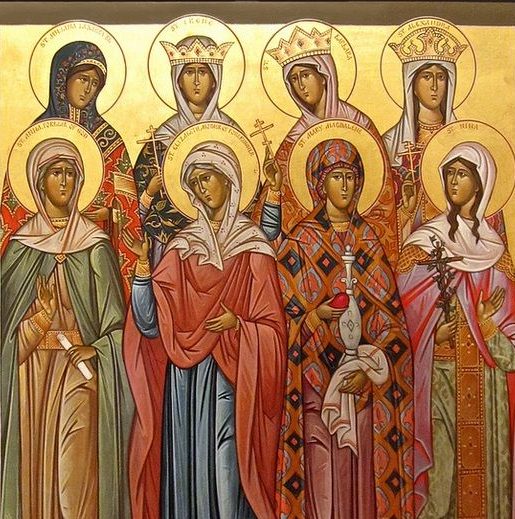 This [past] Sunday—the second Sunday after Pascha—we remember, and we celebrate, the Holy Myrrh-bearing Women, as well as Joseph of Arimathea and Nicodemus. And who were these people? They were a people that exemplified perfect love, courage and faithfulness towards their friend, Jesus Christ of Nazareth. When we read the Gospel, it seems like they are hardly mentioned—just a passing note on the way to Christ’s Resurrection. But what faith and what love of Christ did the Myrrh-bearing Women show! What loyalty and devotion! At the darkest hour, when all had abandoned Christ, when all hope seemed to be lost, these women—along with Joseph of Aramathea—went and risked their lives to take Christ from the Cross, to lovingly wrap Him in linen, and to lay Him in a new grave. And when all were hidden away in fear of the Jews and of the powers that be, when all had abandoned Christ, their murdered Messiah, it was this small group of women who risked everything out of love for Christ—to anoint Him with myrrh and sweet spices. And just as it was through a woman, through Eve, that sin came into the world, it was through a woman, the Theotokos, that God came into the world. And it was to these women that the Resurrection was first revealed. It was in this way that their true love, devotion and bravery was rewarded by God. While all were cowering behind locked doors, these women, faithful to Christ and out of love for their friend, were amazed to behold the empty tomb, and to hear the words—for the first time ever—“He is Risen!”

What an awesome mystery! We all know the joy that we feel at Pascha, so how unfathomable must have been their joy in beholding the Resurrection of Christ. Without their bravery, however, they would have not witnessed such an amazing thing. What they did, if you think about it, was absolutely amazing. Their friend and teacher was just killed in a brutal, horrifying and very public manner. They themselves were suspects and in danger of arrest at any moment. Their very lives were possibly in danger. Why did they then not flee? Why didn’t they lock themselves behind firmly latched doors? And why would they go to the sepulcher when they knew the entrance was blocked by such a large stone that it would be impossible for them to move? To the rational mind, this is all pure madness. They did not expect anything like the Resurrection. Yet what they did was done out of pure love and devotion—despite the risks. As far as they knew, they had nothing to gain for what they did—and everything to lose. They went to the tomb out of a pure love and devotion for Christ.

What an example this is for us! If we really reflect on the actions of these brave women, couldn’t we say that their bravery and devotion can often put us to shame. It is easy for us as Christians, living in relative comfort here in the West, in the United States, where we face no real persecution or martyrdom. We know that Christ is risen, and we already know of the empty tomb. All of these things have been revealed to us, and unlike the Myrrh-bearing Women venturing out into the dark early on that first Pascha morning, we have witnessed two thousand years of saints and sanctity—the proof of the Resurrection, the spiritual riches of the Church and the fruits of a life in Christ. And how tepid we are in our faith. How often is our own devotion to Christ dry and lackluster—going through the motions and saying our prayers as if it is a chore or an obligation. We often—and I certainly speak for myself as well—lack the burning love, the stoutness of soul and the pure, devotional heart of these brave women. Their faith in God drove away their fear and proved stronger than all else.

And what happened when the Myrrh-bearing Women got to the tomb? The stone was rolled away, and all obstacles were removed. Something new and wondrous was happening. It was not the myrrh-bearers who anointed Christ, but rather Christ who, in His rising, would bestow myrrh on His people through His Church—the mystical Body of Christ. From then all, every Christian was to be a myrrh-bearer. All the life of the Church and all of Her Sacraments bestow a spiritual myrrh on all those who believe on Him and who strive to die in Christ so that they might rise with Him in His Resurrection.

This spiritual myrrh is not only in the sense of acquiring the spiritual perfumes of the Holy Spirit—charity, humility, peace, meekness and so on. But even the very relics of our saints and the icons in our churches exude a heavenly and sweet-smelling myrrh. This is a very real and tangible reminder of God’s grace active in this world.

And yet, in the words of Fr. Alexander Elchaninov: “As Orthodox, we have a great treasure of things and yet we vegetate in mediocrity.” And that is, spiritual mediocrity. A listlessness. Discomfort. Coldness of heart. Blinding egoism. Boredom. Even at times we may be afraid to witness and express ourselves openly as Christ’s disciples. And what a terrible shame. Christ said, Let your light so shine before men, (Matt. 5:16) and whosoever shall be ashamed of me and of my words, of him shall the Son of man be ashamed, when he shall come in his own glory, and in his Father’s, and of the holy angels (Luke 9:16).

Let us throw off forever this shameful fear and apathy and truly follow Christ in the example of the Myrrh-bearing Women. Let us leave from the fearful shadows and locked rooms and come out to meet Christ. If we do, we will find, like the Myrrh-bearing Women did, all of our fears banished, the stone rolled away and we will behold the bright and wondrous sepulcher of Christ. All gloom and doubts, fear and hopelessness vanish like mist in the light of the rising sun on that first Pascha morning, and we will know that there is nothing to fear, for Christ has arisen, and Christ has conquered the world.

By the intercessions of the Holy Myrrhbearers, O God, have mercy on us and save us. Amen. The Myrrh-Bearers
Metropolitan Paul Yazigi
The real anointing is putting on incorruptibility. Christ rose from the grave, Himself being precious myrrh of sweet fragrance. Therefore, human nature carried this precious and new myrrh. Walking on the water: how can we believe in the impossible?
Igumen Nektary (Morozov), Elena Balayan