Satan, the Ruler of this World

Metropolitan Ephrem of Tripoli, al-Koura and Their Dependencies 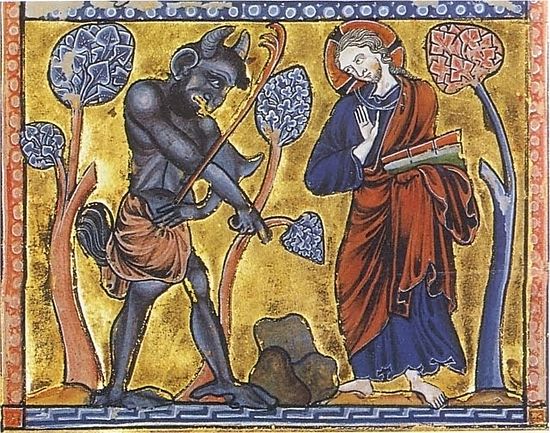 "Most assuredly, I say to you, unless a grain of wheat falls into the ground and dies, it remains alone; but if it dies, it produces much grain" (John 12:24).

Satan is the ruler of this world. Where lies his authority to tempt man? It lies in that he is the seducer, who seduces man and his mind.

From the beginning of Jesus' life in the Gospel, He was appointed to combat this seducer and his seduction. There the devil tempted Him for forty days and He finally replied to him after reaching the point of starvation, "Man shall not live by bread alone, but by every word of God" (Luke 4:4).

The purpose of this temptation of hunger is to create disorder and confusion in the heart of man. In the end, Christ defeated Satan through His death on the cross, and His resurrection on the third day.

Jesus was not only glorified in smashing the devil's authority. He was also and especially glorified in His drawing "all" to Himself -- all people, no matter their nation or race. This final victory did not take place with spectacular worldly pomp, but with His being raised upon the cross. The Lord Jesus, in His divine wisdom, is also a seducer of humankind, through his ultimate love and not like the devil who seduces in order to corrupt.

In the Gospel of John, the Lord says, "Now is the judgment of this world; now the ruler of this world will be cast out. And I, if I am lifted up from the earth, will draw all to Myself" (John 12:31-32). By virtue of the cross, God reaches the pinnacle of His dispensation by smashing the power of Satan and liberating man from his seductive shamelessness. So the Lord returns everything to Himself. Thus before giving up his spirit, He says, "It is finished" (John 19:30).

Therefore, it is enough for us humans now, after this victory, to stand in our life beside the suffering, victorious Jesus Christ, for us to escape from Satan, the ruler of this world. Beloved! How many times has Satan seduced in this world by means of money, so that we think that happiness is in the accumulation and stockpiling of wealth in order to enjoy the pleasures of this deceitful world. But the Lord says to us, "Man does not live by bread alone..." Likewise he deceives us when we chase after worldly positions, glories and authority. But we hear the Lord say, "You shall worship the Lord God and Him only shall you serve" (Matthew 4:10).

Metropolitan Ephrem of Tripoli, al-Koura and Their Dependencies If Satan is Alive, Why Not Millennialism?
Fr. John Whiteford

If Satan is Alive, Why Not Millennialism?
Fr. John Whiteford
"The problem with premillennialism is that it tended to feed into other heresies, such as Montanism, which believed that Montanus was the Holy Spirit incarnate, and which believed that the Kingdom of God was soon to come to be established in Phrygia. We have seen similar heresies with millenialist eschatology in more recent times, with the Jehovah's Witnesses, Seventh Day Adventists, Mormonism, the Jim Jones Cult, and Branch Davidians. Given the excesses this view has tended to produce, the Church felt it necessary to clearly define the matter." “Satan has crawled like a snake into the Finnish Parliament”
Johan Beckman
If the given law is in fact passed, then this will signify the end of Christianity in the official Church of Finland. There will be great problems, and both the Lutheran and Finnish Orthodox Church will break down.
Comments
×