Returning to Alaska as the newly-consecrated first bishop of Kodiak, Bishop Ioasaph Bolotov perished at sea during a storm that raged May 21-24, 1799. With him also perished Hieromonk Makary and Hierodeacon Stephan when their vessel the "Phoenix" sank during the storm. 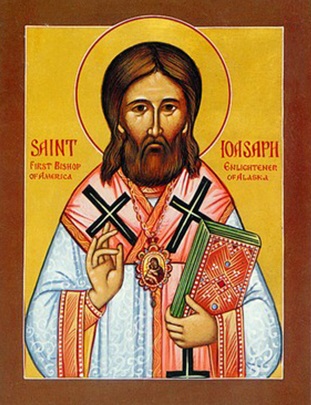 “We ate rotten three-year-old dried fish, to the last bit, although when we arrived here, fish were still running but not harvested.”

The author of that sentence, Archimandrite Ioasaph Bolotov, was head of the first Christian missionary outreach to Alaska. Along with nine others, Father Ioasaph traveled overland from his home at the Valaam Monastery in Russian Finland to the mission’s headquarters in Kodiak, Alaska. This 12,000 kilometer journey (7,300 miles), taking over ten months on foot, on horseback and by boat, is still on record as the longest missionary voyage in history.

Archimandrite Ioasaph’s mission had been solicited by the Russian American Company and commissioned in 1794 by the Empress of Russia. Under such patronage, the missionaries might have expected a warm welcome from Alexander Baranov, the company manager at Kodiak.

This was not to be.

Upon arrival, Father Ioasaph and his monks discovered that their promised church and lodging didn’t exist. Baranov wouldn’t even give them a tent for worship. Reporting to his boss that he was financing and supporting the mission, the manager instead robbed, denigrated and abused the monks. No food supplies were laid in either for the missionaries or for the large Aleut population that constituted their immediate flock. Fr Ioasaph, wrote:

Under our parkas, we are always half naked, and those parkas get very dirty… A household may not put up one single stick of wood, but whenever Baranov wants his tea pot heated, he sends men out for wood. They break corners off of buildings, or rob the coal from the metal smith … We regularly go to the beaches to collect sea snails and mussels and we have only some leftover bread which will not last long. Mr. Baranov and his colleagues do not experience hunger. For him they hunt sea lions and seals. From the Alaska Peninsula they bring caribou meat, and he always has milk.

In addition to these physical hardships, the monastic brethren were lodged in barracks with company workers, “where the men lived with their prostitutes.”

So why did Father Ioasaph and his monks remain? “My only delight,” says the missionary leader, “is in the Americans who are coming from everywhere to be baptized.” On their trek across Siberia, and in their travels through the Aleutian islands, the team regularly encountered indigenous people who had heard of Christ and sought baptism. When stranded by a storm in Unalaska Bay, they baptized more than a hundred people who had just been waiting for a priest to show up. Upon finally reaching Kodiak, the missionaries received seven thousand new converts. 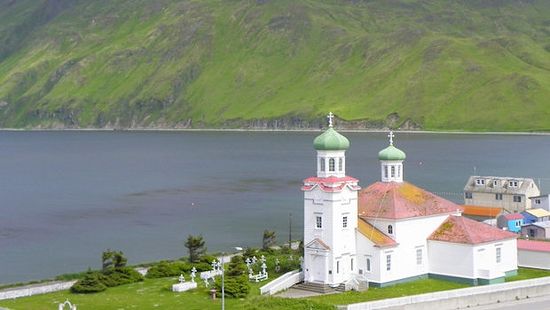 Father Ioasaph and his team loved the people they’d been sent to serve, and respected them highly. They made intensive study of Aleut language, culture, and traditional religion, reporting on all aspects with utmost interest and regard. They often repeated that some of the company’s Russian employees, though Orthodox for countless generations, were “put to shame by the good conduct of the Americans,” who’d been Christian only a few months.

Starving, freezing and abused on their Kodiak base, these missionaries made apostolic journeys covering thousands of miles and baptizing thousands of willing souls. Often their hardest task was not convincing non-Christians to accept Christ. The converts-to-be were ready and waiting! Their great struggle was to endure abuse, scorn, and denigration by the very people whose job it was to host and support their work.

All of Father Ioasaph’s complaints are quoted from one letter to Gregory Shelikov, the direct superior of the abusive manager Baranov. To the Holy Synod, to their abbot in Finland, and to all others the missionaries reported good things—the character and piety of the American people, the successes of the mission, and the occasional kindnesses received from the Russian American Company. They spoke against abuse inflicted upon their American flock, but only in this one instance did the Kodiak team disclose their own suffering.

In 1799 Father Ioasaph was consecrated in Russia to be the first Orthodox bishop for the Americas, but died in a shipwreck on the return trip to Kodiak. It took forty years for a replacement to be appointed.

When that replacement bishop, St Innocent of Alaska, first arrived in America as a missionary priest, he found the fruits of Bishop Ioasaph’s mission everywhere. Father Herman, the last of the Kodiak missionaries, was already revered as a saint. Thousands of American Christians had received the seed of the Gospel, had accepted baptism, and were simply waiting for St Innocent and his team to solemnize their marriages, baptize their children, and teach them how to live as Christians. To this day, many Alaskan Christians follow Christ because Bishop Ioasaph and his monks were faithful in great adversity.

May we all receive Christ with the eagerness and patience of the Christians of Alaska. May our lives bear the fruits of the humble, uncomplaining love practiced by those who evangelize us.

All quotes are from “Letter from Archimandrite Ioasaph to Gregory Shelikov, 18 May 1795,” translated by Lydia Black and reprinted in pp 58 – 63 of Alaskan Missionary Spirituality, edited by Fr Michael J Oleksa and published 2010 by St Vladimir’s Seminary Press in Crestwood, NY. Matushka Olga Michael: A Helper in Restoring the Work of God's Hands
Fr. John Shimchick
While all of the canonized saints of North America have so far been men, over the past few years an Orthodox woman, native of North America, has slowly become known to more and more people, particularly other Orthodox women. St. Juvenaly – First Martyr of America
Commemorated July 2/15
The holy, glorious, right-victorious hieromartyr Juvenaly of Alaska, Protomartyr of America, was a member of the first group of Orthodox missionaries who came from the monastery of Valaam to preach the Word of God to the native inhabitants of Alaska. He was martyred while evangelizing among the Eskimos on the mainland of Alaska in 1796. His feast day is celebrated on July 2, and he is also commemorated with all the saints of Alaska (September 24), and with the first martyrs of the American land (December 12).
Comments
×