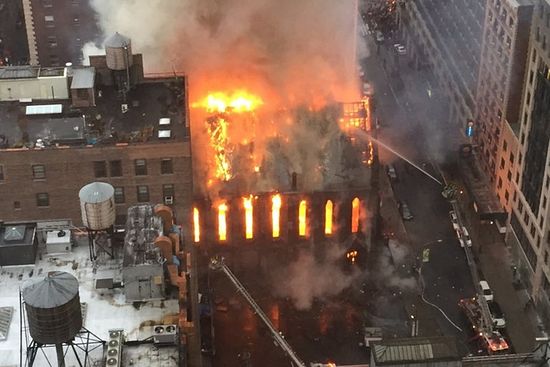 The fire that destroyed a 160-year-old Serbian church in Manhattan last month wasn’t sparked by angry Croatians, but by Easter candles left burning by a caretaker, officials said Thursday.

“Fire marshals have . . . determined that candles, which had not been completely extinguished, caused the fire,” FDNY spokesman Frank Gribbon said.

Investigators were able to find evidence in the remains of the Serbian Orthodox Cathedral of St. Sava on West 25th Street that proved caretaker, Slobodan Ljubenko, 69, had accidentally caused the May 1 fire by failing to put out the candles, sources said.

No charges are expected.

Rumors had swirled around the congregation that the fire was set in retaliation for the Serbian-Orthodox role in blocking a Croatian religious leader’s canonization. FDNY Investigation Underway At Burnt Shell Of Landmark Serbian Orthodox Cathedral Of St. Sava, 15 West 25th Street, Flatiron
Vitali Ogorodnikov
The building is a New York City landmark and is listed on the U.S. National Register of Historic Places. Although the city’s laws protect the building from further demolition, the stone shell may be torn down if ultimately deemed dangerously unstable. Fortunately, the walls appear to be structurally sound for the time being, though serious reinforcement work would be permitted only after the investigations are complete. Christian Monastery Burned Down in Biblical City of Bethlehem

Christian Monastery Burned Down in Biblical City of Bethlehem
In an anti-Christian incident which has largely gone unnoticed, the St. Charbel (Maar Charbel) Monastery in Bethlehem was attacked and burned down on September 26th. The monastery is located in the Wadi Maali neighborhood of the city where King David was born and is the reputed birthplace of Jesus.
Comments
×