Crisis Around the Council: On What Does Constantinople Diplomacy Depend? 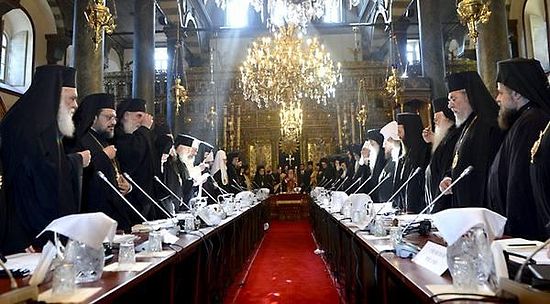 Disappointment and agony—thus can be characterized the reaction to the June 6 decision of the General Secretariat of the Ecumenical Patriarchate not to hold any supplemental consultations on the comments submitted by Local Churches concerning the drafting of the conciliar documents. The Holy Synod chaired by Patriarch Bartholomew received the positions and opinions voiced lately by a number of sister Orthodox Churches “with surprise and perplexity,” as is stated in the official Phanar report, but, alas, not with attention and understanding, and stated that a revision of the already-planned conciliar process … exceeds all institutional bounds. In short, “Objections are not welcomed, attendance is strictly required.”

The suggestion of the Synod of the Russian Orthodox Church to hold an additional meeting of the pre-conciliar consultations no later than June 10 was categorically rejected. The Ecumenical Patriarchate “calls … in the previously established terms to take part in the work of the Holy and Great Council, according to the Pan-Orthodox decisions, as signed by the Primates at their meetings, and as authorized by the representatives of the Church during the course of the long process of pre-conciliar preparations.” Institutional frameworks turn out to be more important than trust. Thus is revealed the true price of assurance in brotherly understanding and closeness.

What is Constantinople’s diplomacy counting on in such a complicated situation? On the documents with their numerous contradictions and inadequacies that caused the sharpest criticisms turning out to be unexpectedly accepted by a general consensus? On a new rigorous negotiation process? But coordination and editing is the task of working groups and specially designated representatives. Disputes and confrontations in the presence of Church primates and numerous delegation members, the body of observers, press and invited guests is far from the best solution, especially if we are speaking about a demonstration of Pan-Orthodox mutual understanding.

“Hurry, slowly,” warns that ancient wisdom. The process of coordinating the agenda of the council, as per the witness of the participants in the negotiations, turned into a race of prestige for the main initiator and organizer of the event, the Patriarchate of Constantinople. Preparatory work has been underway for seven years, since 2008. It’s absurd and laughable that now not even a few months can be given for the main task—familiarization with the draft texts in the Local Churches.

In the end, Patriarch Bartholomew and his closet advisors find themselves under a barrage of criticisms, and this very moment is turning out to be the most inconvenient for holding such an important historical meeting. Not everyone is able to publicly admit their own mistakes. In the artificial crisis that has arisen against the wishes of the Russian Orthodox Church, the Georgian Orthodox Church, the Bulgarian Orthodox Church, the Greek and Antiochian Orthodox Churches there exists the great temptation to provoke an open conflict and even the premature termination of the work of the Council with the most serious unpredictable consequences for the future of Ecumenical Orthodoxy.

It is entirely possible that Constantinople diplomacy deems exiting from this situation that has come about and is so unfavorable for it, as a path to scandal. Accusations have been formed against Moscow, as evidenced by many signs. Representatives of the Phanar have repeatedly exhibited their irritation. Unprecedented in terms of attacks and boorish insinuations was the publication of the article, “Is the Decision of the Georgian Church Appropriate, or Provocative?” by Protopresbyter George Tsetsis of the Patriarchate of Constantinople. In it he allows himself to argue that the Georgian delegates “tortured them,” that the behavior of the Georgian representatives would “exasperate and lead to a standstill.” Tsetsis allows himself such evaluations of the internal affairs of the independent and self-governing Local Georgian Church that we are taken aback. According to him, “The Georgian Church finds itself captive within fundamentalist circles.” The author uses worn-out clichés and intimidating figures of speech such as, “the return of the country to the Middle Ages.” Altogether, in the opinion of Tsetsis, who is, by the way, one of Constantinople’s central actors in the pre-conciliar process, there looms, as is apropos to the trendy political rhetoric, “the shadow of Moscow”.

Such attacks have caused righteous indignation in Georgia. It’s difficult to imagine a peaceful flow to the Council with such intense emotions. Using the same logic as Protopresbyter G. Tsetsis’s, it’s easy to wonder, to what circles does the Patriarchate of Constantinople find itself captive and what’s the value of the—in reality false—graciousness and brotherly love of the modern ecumenical theology of Metropolitan J. Zizioulas, and Protopresbyter G. Tsetsis.

The remaining days until June 19, the start of the Council, unfortunately, most likely, will set a reverse countdown to the start of a negative scenario. The initiative of the Synod of the Russian Orthodox Church contains within itself a realistic opportunity to save the situation. We pray the Lord to instill within His All-Holiness Patriarch Bartholomew a true conscience, not the rhetorical “special responsibility for upholding the unity of Orthodoxy.” From the Second Vatican Council (1965) to the Pan-Orthodox Council (2016): Signposts on the Way to Crete
Fr. Peter Alban Heers
The Orthodox Church stands just weeks away from the long awaited “Great and Holy Council,” which will convene in Crete on the Feast of Pentecost. This Council is unique in the history of the Church for the length of time it has been under preparation, but also for another first: the degree to which its preparatory meetings, organization and certain of its texts have, under the influence of a council of the heterodox, the Second Vatican Council, diverted from the Orthodox way.

Fr. George Maximov offers theological reflection on document of June Pan-Orthodox Council
Priest George Maximov
On April 19 a conference was held at St. Tikhon's University in Moscow on the topic "The Pan-Orthodox Council: Opinions and Expectations," in which participated numerous hierarchs, priests, and theologians, among them Fr. George Maximov, a well-known missionary priest in Moscow, who offered a presentation entitled "Misgivings regarding the upcoming pan-Orthodox Council." In his talk he addresses what he sees as some problematic theological points arising from the council documents, as well as problems with the council's procedural regulations.
Comments

The day of the Ecumenical Councils are long past. It would have been
one thing if this meeting in Crete had been an Orthodox gathering
to discuss the problems that the Church faces in the world such as
the genocide of Christians in the Middle East and the increasing hostility
to Christianity in the West.

There is no heresy to be refuted here. There is no need for an
Ecumenical Council. It may very well be a blessing that several of the
local Churches will not be going to Crete. As one who is under the
omophorion of the Ecumenical Patriarchate and who admires the Church
of Constantinople, I am dismayed by its present course.

I am hoping more of the local Churches will refuse to attend the
meeting in Crete. The fewer who are present the better it will be
for the Orthodox Church as a whole.