Primates, or Popes? Is there an attempt, on account of the Great Synod, to vest the Primates with Papal power? 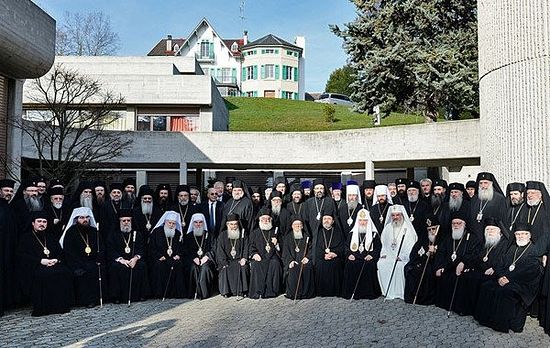 Do the Orthodox Churches have Primates or Popes? Could it be that there are some, who, on account of the Holy and Great Synod, want to vest the Primates with Papal powers as well?

These questions arose out of the reactions of certain “defenders” of the upcoming Holy and Great Synod, who became stirred up with the unanimous synodical decisions by the Hierarchies of the Churches of Serbia, Bulgaria, Georgia and Greece, pertaining to the stance that these Churches will hold in the Pan-Orthodox Synod.

Without giving any answers to the individual, extremely serious complaints by the Holy Synods of the Local Churches, they rend their garments and monotonously repeat: “The Primates had signed the texts, and they had made the decision, both for the convening, as well as for the procedure and the regulation for the operation of the Synod; consequently, the Local Synods have no right to opine on the decisions of the Primates”! It was along the same logic that even the Sacred Resident Synod of the Ecumenical Patriarchate had aligned itself, in its official announcement (6 June 2016).

Excuse me?! When did the Primates of the Orthodox Local Churches become… popes? Since when does the personal opinion-decision of one Primate irrevocably bind and oblige the Synod of the Hierarchy in which he belongs, to conform?

Is it the Primate, or is it the Synod of Hierarchs who comprise the supreme administrative instrument of Local Orthodox Churches, in accordance with the Orthodox tradition? Does each and every Church opine synodically and express Herself through a Synod, or is She bound by whichever view given by a Primate? (I will not add the term “ex cathedra” here, to avoid our minds from going elsewhere!)

Of course the Primates signed! However, on returning to their Local Church, each Primate submitted his decision – as he was obliged to – to his Synod. And each sovereign and responsible Synod opined, either agreeing with the Primate’s signature, or disagreeing and naturally overturning his personal decision! Are there perhaps those who seek to dictate what a Synod should be deciding?

It is praiseworthy of the Primates of the Churches of Serbia, Bulgaria, Georgia and Greece, who, by respecting the synodical institution, had submitted their decisions to be judged by the Body of the Hierarchy. And not only that; by complying to the letter and to the spirit of the 34th Apostolic Canon, they came together, they agreed and they co-signed the unanimous decisions of their Hierarchies: «…neither should he (the First of each Local Synod), without everyone’s opinion, do anything. For, this is accord, and God is glorified through the Lord, in the Holy Spirit: the Father, the Son and the Holy Spirit». This is what respecting the synodical institution means! This is what respecting the unity of the Church means!

Unfortunately, there are some who, being used to the manner that the synods of certain Patriarchates function (in the North and the South and Eastward... not mentioning any names, or offending any families…), cannot “digest” the fact that there are Local Churches in which the synodical system is operative – undoubtedly with problems and difficulties, but operative. The Primate does not give commands - Papist-style – while the remaining synodical participants obey, whether they like it or not…

The danger for Orthodoxy itself is that there are those who want to impose the operating motif of the “Synod” of certain Patriarchates on all the Churches, and through the Pan-Orthodox Synod are striving to elevate the Primates, from “primus inter pares” (first among equals) to “primus sine paribus” (first without equals – Elpidoforos of Prousa) and in fact with papal jurisdiction! In this way, it will be easier to acknowledge the First among the Firsts, who will then once again be “sine paribus”. This matter is a determinant one, and directly touches on the essence of Orthodox ecclesiology.

It is obvious that the image presented by the Orthodox Church in view of the Pan-Orthodox Synod is not ideal. Not wanting to recognize the magnitude of their responsibility for this situation, some of the responsible individuals are trying to put the blame on the function of the synodical system of the Local Churches. But the problem was mainly created by the anti-traditional way that the Holy and Great Synod was being prepared until now, and chiefly its Operational Regulations, which, in the name of the Pan-Orthodox Synod had disregarded the synodical institution in the Local Churches. It is not possible, for such important matters (e.g., the approval of pre-synod texts) to be decided on by a representative, irrevocably and binding for the Churches, in absentia of the Hierarchs of the Local Churches. It is not possible for the Hierarchs of the Churches to not have the last say on the Operational Regulations of the Pan-Orthodox Synod. There was, of course, a formal (bureaucratic) authorization which, as it turned out, could not possibly substitute the essential function of the synodical system of each individual Church, nor the worldwide, Orthodox Catholic Church.

A solution to the emerging problem can exist, only with a revision of the tactics so far, with repentance, and at a pan-Orthodox level. At this last minute, may a substantial respect towards the synodical system, with respect for the Synodical decisions - which were voted on unanimously by the Hierarchies of the Local Churches – be the beginning. The Essential Problems with the Holy and Great Council
Met. Hierotheos Vlachos
Eventually, all of the dreams of the "Fathers" of this idea resulted in it becoming, not an Ecumenical Council, but a Holy and Great Council which is still unable to find its identity, tackling just six issues that are vague, untimely, without a clear cut goal, and some of which are detached from the tradition of the Fathers. Crisis Around the Council: On What Does Constantinople Diplomacy Depend?
Andrei Rogozinski

Crisis Around the Council: On What Does Constantinople Diplomacy Depend?
Andrei Rogozyansy
What is Constantinople’s diplomacy counting on in such a complicated situation? On the documents with their numerous contradictions and inadequacies that caused the sharpest criticisms turning out to be unexpectedly accepted by a general consensus? On a new rigorous negotiation process? But coordination and editing is the task of working groups and specially designated representatives. Disputes and confrontations in the presence of Church primates and numerous delegation members, the body of observers, press and invited guests is far from the best solution, especially if we are speaking about a demonstration of Pan-Orthodox mutual understanding. The Holy and Great Council: Separating the Wheat from the Chaff
Evagelos Sotiropoulos

The Holy and Great Council: Separating the Wheat from the Chaff
Evagelos Sotiropoulos
The indispensable building block for Christian unity is in matters of faith. Do Orthodox Christians not pray, in every Divine Liturgy, for the unity of the faith and for the communion of the Holy Spirit? Unity of the faith gives birth to communion in the sacraments - including baptism, and at the Lord’s Table above all.
Comments
×