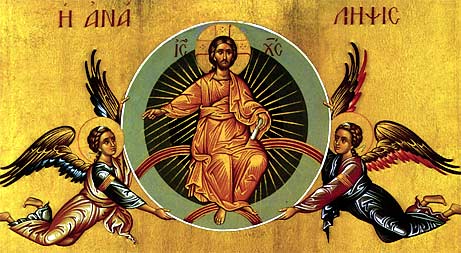 When the Lord Jesus was suspended upon the cross, the whole economy of salvation was completed. This is why He said, before giving up His spirit, "It is finished." This does not only mean that what appears in the Law, the Prophets and the Psalms was completed, but also that the economy of salvation was completed. What we have witnessed, after the crucifixion, is a series of expressions of the completion of salvation: the Lord Jesus' resurrection and ascension to heaven and finally the descent of the Holy Spirit on glorious Pentecost.

Man, then, by sitting in heaven in the person of the Lord Jesus, becomes, in all simplicity, divine. Jesus is the Son of God who united with our humanity and granted to us to become united to His divinity. The life which is in Him, which is in the Son of God, the Lord God gave to us, so that it itself may be our life. In the beginning, we were created, but in Jesus Christ we were divinized-- that is, we were granted that God's life might abide in us. This means that we become gods, because God's life is not created. This body is created. Man, as the Lord God made him in the beginning, was created. But, after the Son of God took our humanity, our human nature, after uniting to us in nature, we who are created came to bear within ourselves God's uncreated life. Therefore, the Lord God granted us to become gods by grace, by blessing. This is the grace that the Lord God bestowed upon us. At one time, we did not have this grace. Then later, after the Son of God became incarnate, we were granted to become like that, to acquire God's life, God's grace, God's Spirit. For this reason, in the ascension the work of the economy of salvation was truly completed, for man, in the Lord Jesus Christ. After that, the Holy Spirit was sent to rest upon humanity and to realize in humanity, in all those who have believed in the Lord Jesus Christ, what the Lord Jesus Christ realized in His own person. The Holy Spirit was sent to us from above, so that that which the Lord Jesus Christ realized for man in Himself could be realized in us. Therefore, faith in the Lord Jesus Christ, acting according to His commandments, imitating Him, following Him, and bearing the cross upon which He was suspended-- I mean the cross of perfect love for God, man, and creation-- all this, in the Holy Spirit causes each one of us to acquire, personally and in actuality, that which the Lord Jesus Christ realized in His body.

The Lord Jesus ascended upon the cross for no other reason than that He desired to bring us up to heaven. The Lord Jesus only sat upon the throne of glory that is the cross because He desired to seat us upon God the Father's throne of glory, at His right hand. The glory of the Lord Jesus was realized, on earth, through the cross. For this reason, the cross is the sign of glory. Before Jesus, the cross was the sign of the curse. With Jesus, the cross became the sign of glory. Before the Lord Jesus was handed over to the Jews and then over to the Romans to be crucified, He spoke about the hour having come for the Son of God to be glorified. This means to be crucified, because the cross is what demonstrated the perfect glory of the Lord Jesus Christ. And His glory is His love for humankind. This is His glory. He went in His love for humankind, in revealing His glory, to the end, since He was pleased to accept man's death, He was pleased to die, to completely unite Himself to man. It would not have been possible for this union to happen had the Lord Jesus Christ not been suspended upon the cross. On the cross was manifested that of which the Apostle Paul spoke in his Epistle to the Philippians, that the Lord Jesus Christ "emptied Himself, taking the form of a slave and becoming in the likeness of man." That is, He became a man completely. He became a slave to man. He did not only become a man, but became a slave to man because He came "to serve and not to be served." He enslaved Himself completely to man in order to save him, to rescue him from sin, from pain, from suffering, from death. Therefore He cleaved to him completely, in death. Had this cleaving in death not happened, then no real union would have occurred between God and man. The Lord Jesus had to die. Mankind does not truly unite except in death. They unite first to God, in death and they unite to each other in death. This means that their love for each other is not perfect love, exuding God's glory, unless one is prepared to die for the sake of God and then for the sake of his brothers. Thus the Lord Jesus said, "Greater love has no one than this, than to lay down one’s life for his friends."

Therefore, today's feast is an unveiling of the true joy that came through the cross. When it was said "by the cross joy came into the world," this joy is completed, now, in the ascension and the seating at the right hand of God the Father. Therefore, the Feast of the Ascension is a fundamental feast in Christ's Church. The resurrection would have had no value, had there been no ascension. Even Pentecost was only given to us so that we might be able to participate, actually and personally, in the act of the ascension, which was accomplished by the Lord Jesus in His body. Therefore, today we find ourselves in the midst of heavenly joy. Man is seated, in the person of the Lord Jesus, in heaven, at the right hand of God the Father. This is true joy and there is no greater joy than this joy. If we fix our eyes upon that which the Lord Jesus realized today in the ascension, then we realize-- in the Spirit and not by reason-- the greatest joy, which has been bestowed upon all humankind. Amen. The Ascension of the Lord
Archpriest Seraphim Slobodskoy

The Ascension of the Lord
Archpriest Seraphim Slobodskoy
Ascended to Heaven, Jesus Christ according to His own promise invisibly always comes to earth among those who believe in Him, and He will come again to earth in a visible form to judge the living and the dead who will then rise from the dead.

On the Feast of the Ascension: A Sermon by Our Righteous Father Sebastian Dabovich San Francisco, 1899
St. Sebastian Dabovich
The "two men in white apparel," who immediately after the ascension of the Lord appeared to the Apostles and asked them why they stood gazing up into heaven, were without doubt themselves inhabitants of heaven; therefore it is not to be supposed that this was displeasing to them, or that they desired to direct the gaze of those men of Galilee elsewhere. No. They desired only to put an end to the inert amazement of the Apostles when saying: Why stand ye gazing up into heaven?
Comments
×