The Renunciation of Reason 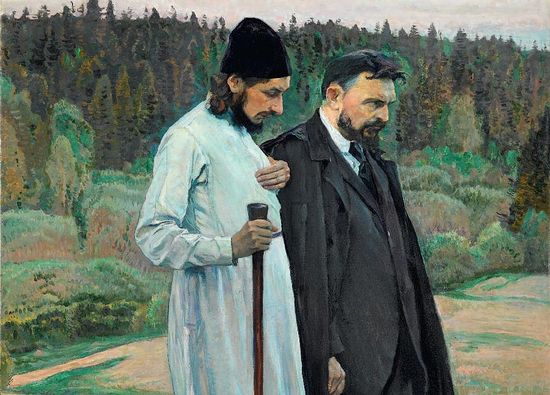 I grew up in a house of contradictions. We loved each other and we fought. I had a brother who was five years my senior, and we somehow developed a style of contradiction. If he said white, I said black. If I said red, he said blue. Or after either of us made a perfectly reasonable statement, whatever exceptions might exist, the other was sure to note them. It came to be that in any discussion, the last one talking won. Our conversations still have something of this flavor. (I can hear him saying, “No they don’t”).

Our exchanges point to an inescapable aspect of reality: it is filled with contradictions or at least something that we perceive as contradictions. Reason, as it is commonly used, is quite abstract. Syllogisms step back from reality and speak in terms that are actually quite removed. If two people are discussing a tree, there are many agreeable, scientific observations that can be made. However, none of the observations is the tree itself, and a contradiction rests in that very fact.

Orthodox worship not only notes various contradictions, it raises them to the level of wonder. The teaching of the Fathers frequently hovers over various juxtapositions of opposites. Christ is the God/Man. Mary is the Mother of God. The Trinity is three, yet one. God dies. The Uncontainable is contained. There is an instinct within Orthodox thought that the truth is most profoundly known precisely in the form of contradiction.

One Russian theologian who gave voice to this was Pavel Florensky. Born in 1882, he combined a brilliant scientific/mathematical mind with a profound theological soul. His greatest work, The Pillar and Ground of Truth, was written as his master’s thesis in 1908, and published in 1914. It is particularly remarkable as a theological work by one so young. Florensky was executed by the NKVD in 1937.

He gives an entire section of his thesis to the theme of contradiction. In it, he says, “Love is the renunciation of reason.” This is not a disparaging of reason as a useful tool, but the recognition that the nature of reality always contains contradictions:

We can, however, only express the Truth if we foresee the extreme expression of all the contradictions inherent in it, from which it follows that Truth itself encompasses the ultimate projection of all its invalidations, is antonymic and cannot be otherwise.

The contradictions are resolved in the ascetic life, according to Florensky, a life which he followed with great energy, throughout his time as a student, married man, scientist, engineer, and martyr. And in this, he was fully Orthodox. It is also difficult to describe.

Christ points to this when He tells us that the “pure in heart shall see God.” There is always the great risk in reason in that it becomes the primary tool in the hands of those who care nothing for the purity of heart. The modern world has harnessed reason to great effect, but has, as often as not, used it to create weapons of mass destruction and to monitor and control its own citizens (and in this I think as much about the tools of consumerism as anything). We have become possessors of a “reasonable” truth but do not have the purity of heart to live with its contradictions.

The ascetic life is, at its heart, one of voluntary self-denial and suffering. It is not the embracing of needless pain, nor is it masochistic in the least. Rather, it is a recognition that the desires and passions that rage within us cloud our understanding, darken our motives, and obscure the truth. Contradiction itself can be seen as a form of suffering. It is the “push-back” of reality that refuses to be mastered and controlled. The universe remains stubbornly opaque. More than this, God hides Himself within the opacity of contradiction, in the “Cloud of Unknowing.”

Florensky grasped the true heart of asceticism. He said, “Love is the renunciation of reason.” By this, he does not mean that we embrace the chaos and anarchy of irrationality. Rather, we recognize and accept the limits of reason, and offer ourselves to the contradiction of the reality around us. Every human being stands as a contradiction. They are always more than we think they are, and whatever we think or imagine them to be, they are also something else as well. The refusal to acknowledge the “something else” (the contradiction), is the refusal to renounce reason and, instead, to place reason where love alone belongs.

St. Paul notes that “faith works through love” (Gal. 5:6). This describes the very heart of the ascetic life. Only love extends itself in the self-emptying struggle against the passions without becoming lost in the solipsism of asceticism for its own sake. It is love that endures the contradictions of reality without turning away or reducing them. And it is love that finally comprehends the reality hidden within the contradictions that confront us. A Simple, Great Soul
Fr. Stephen Freeman
For a variety of reasons, I have been spending a fair amount of time with A.I. Solzhenitsyn, the great Russian writer who died in 2008. Orthodox Living in the Modern World: Steps to Spiritual Transformation
From a talk by Schema-Archimandrite Sergius (Bowyer)
Archimandrite Sergius (Bowyer)
In this talk Fr. Sergius speaks on several important themes, including the benefits of pilgrimage for helping us to encounter God, the power of the saints, moving away from an inner monologue towards a dialogue with God beginning with a consistent prayer rule, and having an attitude of blessing and thanksgiving.
Comments

Rdr Andreas Moran6/20/2016 10:55 pm
We may think of apparent contradictions as paradoxes. Many if not most - or even all - aspects of our Orthodox faith are paradoxes in the world's terms, which makes them true in the Church's terms.
×