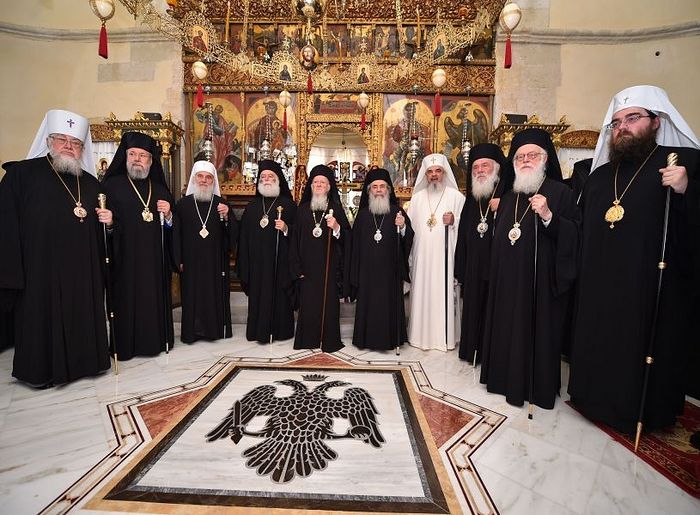 This morning, at 09.00 a.m., the heads of Orthodox Churches arrived at the Monastery of Our Lady of Gonia, in Kolymbari, Crete, where they said a prayer in the opening of the Small Synaxis, the last synaxis of the primates prior to the Holy and Great Council.

In this Synaxis participated the primates and two hierarchs on behalf of each Autocephalous Orthodox Church. The work of the synaxis regarded the analysis of the Message of the Holy and Great Council, the final communique which will be published at the end of the works of the Council.

His Eminence Iosif, Romanian Orthodox Metropolitan of Western and Southern Europe, stated that besides the Message, during the synaxis the primates will discuss the absence of some heads of Churches from the works of the Council.

The message of the Council is very meaningful, somehow approaches the themes addressed by the Holy and Great Council and offers a message of hope. It expresses the desire for the unity, in Christ’s Church, of all Orthodox Christians, led of course by their hierarchs.

In an interview for the national television Kriti TV, His Eminence Emmanuel, Metropolitan of France, offered several explanations regarding the works of the synaxis and the contents of the Message of the Holy and Great Council:

His Holiness will present today the Message to the primates, who, by their authority, will approve it and bring amendments, in order to submit it further to the works of the Holy and Great Council.

The Message is a message to the world, and it is a message that will remain. This means it will be a historical text. Besides the other documents that will be approved by the Holy and Great Council, this will be a message addressing especially the world. First of all, we have to offer to the world a hope addressed to 21st century man, something different than what he expects to hear, and not what we intend to convey. I consider this an occasion to speak another language, to address the issues existing in the world today and exactly this will be described in the Message. Therefore, it will not repeat the subjects on the agenda of the Holy and Great Council.

In reference to the absence of the four Heads of Autocephalous Churches who decided not to participate in the works of the Council in Crete, Metropolitan Emmanuel said:

We hope always. Hope dies last. We hope that the absent Churches will finally come. And why would they not come? As I said yesterday, Orthodoxy is present here and calls everybody here. We do not set limits. We must show the unity of the Orthodox Church. This is the goal of the Holy and Great Council.

Finally, the Metropolitan of France said that "the absent Churches are still present here, and are members of the Holy and Great Council." From the Second Vatican Council (1965) to the Pan-Orthodox Council (2016): Signposts on the Way to Crete
Fr. Peter Alban Heers
The Orthodox Church stands just weeks away from the long awaited “Great and Holy Council,” which will convene in Crete on the Feast of Pentecost. This Council is unique in the history of the Church for the length of time it has been under preparation, but also for another first: the degree to which its preparatory meetings, organization and certain of its texts have, under the influence of a council of the heterodox, the Second Vatican Council, diverted from the Orthodox way.
Comments

James6/20/2016 6:22 pm
At first I thought you were joking and just being silly but wow he does give a "Holy Koran" and receives Coca Cola bear images!

Maybe it's a political move
To appease Muslims since he live in turkey and there are very very very few orthodox he is doing things to preserve the traditions of orthodoxy in Constantinople and what remains only orthodoxy in new rome.
Just my positive thought.

Lord have mercy on us and guide us through these difficult times.

Paok 6/19/2016 10:45 am
Disgraceful, prideful, arrogant Greek Mason's front and center. The one to the left of the EP was the first to imitate the Latin Pope by kissing the Koran and giving it away as a gift to his Muslim friends and then the EP did the same thing after a meeting with the Coca Cola polar bears! See the pathetic spectacle of our EP on YouTube. Patriarch Bartholemew gave as a gift the "Holy Koran" (as he called it) to the Muslim executive of Coca Cola (which supports the EP financially). See the video to get the full impact.
https://m.youtube.com/watch?feature=player_embedded&v=-9f_4jPvGEA
You will see it at the 3:50 mark. Can we trust these people to really do anything good for Orthodox Christianity? This is a pathetic joke just like the three stooges in the middle of the picture above.
×