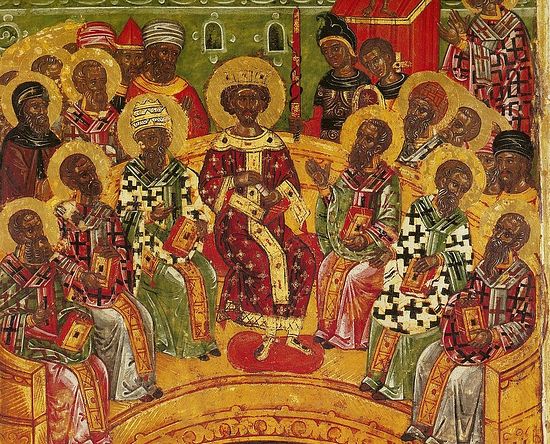 The event scheduled to be held (at time of writing) in Crete this coming Pentecost and usually termed “the Great and Holy Council” is sometimes referred to in terms that suggest that it will be the Eighth Ecumenical Council. Pundits often say such things as “the last such council to be held in the Orthodox Church was over a thousand years ago”, referring to the Seventh Ecumenical Council held in Nicea in 787. Such words hint that although the upcoming gathering is not precisely such an Ecumenical Council, it could be—especially if everyone in World Orthodoxy got on board. According to such thinking, all that is needed for “the Great and Holy Council” to become “the Eighth Ecumenical Council” would be universal acceptance by the Orthodox world after the council occurs. In view of this, it is worth looking backwards over our historical shoulder and remembering what the Seven Ecumenical Councils looked like. When one does, one can see some interesting differences between then and now.

First of all, the Ecumenical Councils were each called to deal with some matter of pressing urgency—namely, heretical movements which were threatening the purity of the Church’s Faith. Thus Council of Nicea met in 325 to deal with the Christological doctrines spread by Arius; the Council of Constantinople met in 381 to deal with the teaching which denied the divinity of the Holy Spirit, etc. etc. Of course while the bishops were gathered in Council they discussed other things as well, which were also matters of somewhat lesser urgency. Thus, for example, the bishops of Nicea passed a number of canons, such as canon 5 which forbade bishops to accept into communion persons excommunicated by another bishop. But the fact that other topics were discussed and decided does not mean that the Council was called primarily for such discussion. Rather, the Council was called primarily to discuss urgent doctrinal matters, which in those days were primarily Christological. These Councils were not called simply because the bishops felt the Church’s faith needed updating or aggiornamento. The task of keeping current and interacting with modern society (i.e. evangelism) is important and crucial. It is also the normal work of bishops and priests, not Ecumenical Councils.

Secondly, the Councils consisted of as many bishops as could be gathered in one place, not just the heads of autocephalous churches (which in its present form did not exist then anyway) and those with them. Those Councils could conceivably have decided on a more limited invitation list, inviting (for example) only the bishops of Rome, Constantinople, Alexandria, Antioch, and Jerusalem, perhaps along with the periti or experts from the catechetical schools at Alexandria and Antioch. But they didn’t. Rather, they invited all the bishops they could get. That is because they believed that it was the witness and consensus of the rank and file, of those representing the Faith as lived in the trenches, that best served as the matrix in which to discern the leading of the Holy Spirit. Asking only very smart people or very important people for their opinion has its own particular advantages. But the Councils wanted to hear from as wide as group as possible, even if the group contained bishops were who not as bright, or maybe even who were “zealots”.

Thirdly, the Councils produced theological statements backed up with anathemas.   Thus, for example, Canon 2 of the Council of Ephesus: “If any provincial bishops were not present at the holy Synod and have joined the apostasy [of Nestorius], or if after subscribing to the deposition of Nestorius they went back into the assembly of apostates, these men are to be deposed from the priesthood.” Or take, for example, the Definition of Faith produced by the Council of Chalcedon, which concludes with the words, “No one shall be allowed to bring forward a different faith [from the one just described], nor to write, nor to teach it to others. But such as dare to put together another faith, if they be bishops or clergy, let them be deposed; if they be monks or laity, let them be anathematized”. It was the same with pretty much all of the Councils—even the provincial Council of Gangra produced rules with teeth. Thus their Canon 1: “If anyone shall condemn marriage, or abominate and condemn a woman who is a believer and devout and sleeps with her own husband, as though she could not enter the Kingdom, let him be anathema.”

The point here is that the Councils were not content merely to produce documents for people to read for their edification.   They insisted that these truths be followed, and backed them up with anathemas, excommunicating those who dissented from them. Thus, to give an example from a modern controversy, those Councils would not have been satisfied to simply affirm monogamous heterosexual marriage as the only godly norm; they would have also followed it up with an anathema excommunicating those who taught or practised otherwise. In the absence of such pastoral and practical follow up, whatever statements are produced remain only words, devoid of any real significance. At the end of the day, no one cares what a person thinks; they care what you do.

Finally, the Ecumenical Councils were rough and tumble affairs, sometimes even with a bit of shouting. (Even if St. Nicholas didn’t actually punch Arius at Nicea, there is no doubt that things then could get a bit rowdy.)   That is because the idea was not to pre-determine the outcome by pushing through a pre-set agenda or decisions made in advance, but to discern the truth during the Council itself. People being people, of course many attempted to ram things through (the famous “Robber Council” comes to mind) and no one would deny a lot of back-room discussion and lobbying. History is messy since even bishops are fallen, and things never quite measure up to the ideal. But the theory at least involved the full, free, and frank contributions of everyone involved, with nothing rammed through and with all voices heard. If this happened today, it would not make for a very edifying scene, and no doubt it would be denounced on Facebook and Twitter, and people would shake their heads sadly and say what a terrible example the Orthodox were setting. Can’t they even get along? But that is because today secular society prefers peace to truth, and thus cannot get very worked up about concepts like heresy. It was different with the Council Fathers of old. They got worked up plenty, because they preferred truth to peace. Or, perhaps more accurately, they saw that peace and unity could only be based on truth, and so they had little time for those promoting error.

What the upcoming event will produce is anyone’s guess. Getting together for fellowship and frank open discussion is always a good thing, whether those getting together represent a select group or a larger one. For those of us not going to Crete, our duty consists primarily of prayer, as we hold up before God for those gathering together for the event. But let our prayer be made in peace as well as with fervency. At the end of the day, regardless of what the upcoming gathering does and decides, Christ will preserve His Church. Tumults there may be, including perhaps such things as has made the history of the Church so interesting in centuries past. But against the Church of the living God, the gates of hell will not prevail. Holy And Great Council Woes
Fr. Ted Bobosh
Various reports are indicating the that the Holy & Great Council of the heads of the various Orthodox Churches which is supposed to start its meeting this week, may be post-poned. Dissension has arisen and some of the heads of the churches have decided not to participate while others are calling for a postponement of the event. If problems on way to Pan-Orthodox Council are not resolved, it is better postponed - Metropolitan Hilarion
He said it is important for the Russian Church that the Council that is due to be held on Crete, in the middle of June, "would become a factor of unity and like-mindedness, so that there would be no unpleasant surprises for the Orthodox Christian Churches at the Council."

Can a Conference of Orthodox Bishops Impart Ecclesiality to the Heterodox?
The Challenge of the Upcoming Great Council
Dr. Demetrios Tselengidis
Absolutely no one, personally or institutionally, has the right to otherwise delineate the boundaries of the Church which have been irrevocably defined by the Ecumenical Councils. It is theologically inconceivable for those religious communities, who continue to believe the same as those heretics, who were defrocked, excommunicated and once and for all cut off from the One and only Church, to be called and recognized as churches.
Comments
×