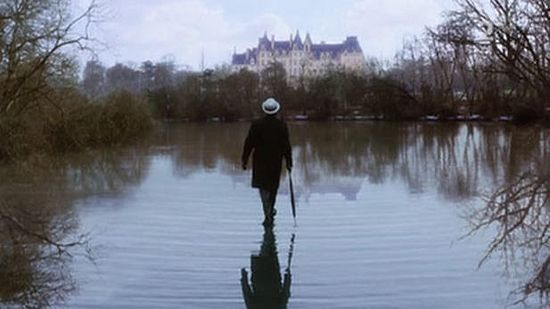 St. Paul notes that “faith works through love” (Gal. 5:6). This describes the very heart of the ascetic life. Only love extends itself in the self-emptying struggle against the passions without becoming lost in the solipsism of asceticism for its own sake. It is love that endures the contradictions of reality without turning away or reducing them. And it is love that finally comprehends the reality hidden within the contradictions that confront us.

It would not be surprising, if you were speaking to a group of fish, for everything you said to be understood in terms of water. If something completely permeates our world, it’s hard to imagine anything in other terms. This is the difficulty in speaking about faith in the context of our modern world. Our culture thinks in terms of “thinking” (ratio). However, Christianfaith is not a subset or a mode of discursive reason. It is, however, a mode of perception, just as is seeing, smelling, hearing, or touch. Faith is the mode of the heart’s perception, and since everyone, even a modern person, actually has a heart, everyone is capable of faith. It is, however, something that takes practice and patience.

Christian faith… is adherence to a presence which confers certitude, in such a way that certitude, here, is first….Thus faith allows us to think, it gives us true intelligence. Knowledge is given to us by faith, that is to say, by our participatory adherence to the presence of Him Who reveals Himself. Faith is therefore not a psychological attitude, a mere fidelity. It is an ontological relationship between man and God, an internally objective relationship for which the catechumen prepares himself, and through which baptism and chrismation are conferred upon the faithful: gifts which restore and vivify the deepest nature of man. “In Baptism,” said Irenaeus, “one receives the immutable canon of truth.” It is first the “rule of faith,” transmitted to the initiated. But this regula fidei (Tertullian, Irenaeus) implies the very faculty of receiving it. “The heretics who have perverted the rule of truth,” St. Irenaeus wrote, “preach themselves when they believe that they are preaching Christianity” (Adversus haereses, Book III). This faculty is the personal existence of man, it is his nature made to assimilate itself to divine life – both mortified in their state of separation and death and vivified by the presence of the Holy Spirit. Faith as ontological participation included in a personal meeting is therefore the first condition for theological knowledge.

From Introduction to Orthodox Theology, pp. 16-17.

That is a very meaty quote, worth looking at carefully. Lossky defines faith as “ontological participation included in a personal meeting.” This is absolutely not the “faith” of discursive reason – it is not something that involves a “leap.” It is not something we use to get around or over doubt. It is not about “thinking.”

In the disintegration of human understanding that marks the modern project, reason has been reduced to discursive reasoning, i.e. logic. Popularly, it refers to what can be proven by demonstration (and often less than that). At the same time, there has been a groundswell of sentimentality, in which how we “feel” about something has been elevated to a position above rational argument. It is in this context that faith is easily misunderstood. Faith is not a leap beyond the provable, nor is it a motion based on strong sentiment. Faith is a mode of perception, a means by which we may know. But it belongs to a much larger understanding of human cognition that is unknown to our culture.

Lossky’s weighty description of faith is: “a participatory adherence to the presence of Him Who reveals Himself.” Every word of his definition is primary. First, there is the notion of participation (koinonia). This is thoroughly Biblical where knowledge is seen as participatory, the result of communion and coinherence. This is problematic for modern understanding. Our culture is rooted in assumptions of radical individualism. It believes that we are not only distinct and separate from everything around us but also that what we think about something is, largely, the sum total of our experience. Thus, what I think and how I feel are considered sufficient to define “my reality.” There is no communion, only occasional alliances with other individuals for a common purpose.

In the Old Testament, it is said that a man “knew his wife,” when making reference to their conjugal union. Modern thought tends to smile knowingly and think that what is being said is but a quaint metaphor for sex. But “sex” is itself the crude metaphor of an individualistic culture that has reduced “union” to a set of feelings. The Biblical phrase expresses the understanding that what is taking place between husband and wife transcends its physical expression. It is a true union in which the two “become one flesh.” Again, such a statement is treated as “mere metaphor” in our modern culture, when it is quite the opposite. It is an effort, in words, to give voice to an experience of knowing that is virtually inexpressible. The modern assumption is that the phrase, “knew his wife,” is an effort to avoid what is actually happening, when it is, in fact, an effort to actually express what is happening beyond direct observation.

Every act of true communion is an act of faith.

The crude materialism of our culture has no way to give an account for the notion of communion. In truth, it does not give a very good account of materialism. Even on the purely material level, our experience of the world and of each other is far more participatory than we consider. We breathe our environment. We eat and drink our environment. The whole living world is a communion of DNA, an interplay, and interrelationship of organisms who have never been utterly distinct. Our own existence and health is itself a symbiotic relationship with colonies of bacteria living within us. Indeed, according to some studies, those same bacteria have an impact on how we think and perceive. And our being unaware of such relationships does not negate them. It only underlines how ignorant our modern perceptions often are.

Lossky adds to communion (participation) the word adherence. Faith is a knowledge that does not come by brief encounter. It is a perception that goes deeply beyond mere observation. It requires true attention. Attentiveness (nepsis), often rendered as “sobriety,” is a key element of the ascetic life of classical Christianity. It is more than mere mindfulness, much less holding a single thought. Rather, it is the fruit of love. It is the attentiveness that is reserved for the beloved – a communion of adherence.

And this is the last word of Lossky’s definition: presence. Faith is a perception and communion, which means that there is actually something (someone) to be perceived and with which to have communion. Faith is not an action reserved to some portion of our mind – it does not take place within us. It is a perception that is true communion.

This carries the conversation back to my previous article, reflecting of Florensky’s description of contradiction. Reality, especially the Presence of God who is the only truly existing One, confronts us as something of a contradiction. It cannot be reduced to discursive reasoning, as indeed is true of anything within the created order as well. Discursive reasoning is but a small sliver of human activity (sentimentality is smaller still). True reason or rationality (logikos) was never meant to be restricted to mere discursive patterns. True reason is the whole capacity that we have as human beings to perceive, know, consider, commune, etc. We are logikos because we are created in the image of the Logos, not because we think in terms of “A” and “not-A” being mutually contradictory.

Florensky centered the perception that carries us past contradiction and into Truth, in the ascetic life of love. This is in full agreement with Lossky’s “participatory adherence to the Presence.” In our cultural context, to use the word “love,” is to invite the entire world of sentimentality into a conversation where it does not belong. The contemporary world knows very little of love in its proper sense. For “love is of God, and everyone who loves is born of God and knows God” (1John 4:7). We are told that “faith works by love” (Gal. 5:6). We are able to perceive what is true by the ascetic life of participatory adherence to the things of God. The Proof of Love
Abbot Tryphon

The Proof of Love
Abbot Tryphon
The Liturgy reminds us, only those with faith and love may draw near to receive the Holy Mysteries. Our participation in the Body and Blood of the Lord provides each of us with the opportunity to be Christ-bearers in the world in which we live, and others will know we belong to Christ, “by our love.” Saving A Democratic Man
Fr. Stephen Freeman
Can such a man find God, or even be saved? That may sound like a strange question, but it lies at the heart of the modern religious crisis.
Comments
×