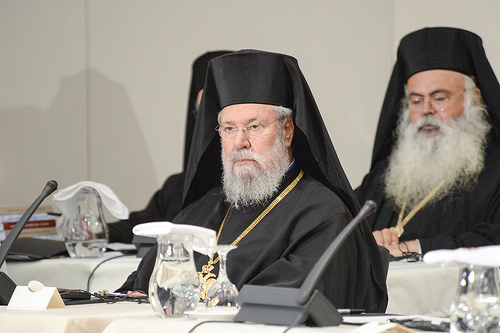 At the opening of the so-called “Holy and Great Council” on the island of Crete speeches were given by several primates of the Orthodox Churches, but among them stands out the speech of His Beatitude Archbishop Chrysostomos of Cyprus. Speaking of the Council as “undoubtedly a great event which we are experiencing,” His Beatitude with sharp criticism addressed those bishops, theologians, and laity, who subjected both the Council itself and the documents it has developed for approval to thorough theological criticism. In particular he said:

“The convening of the Holy and Great Council of the Orthodox Church, even though it may be unbelievable, is a reality! The absence of some Local Churches does not diminish the value of the Holy and Great Council. The themes and documents of the Council were discussed and unanimously approved of by the delegations of the Orthodox Church and their primates, and thus the Council moves ahead. Their present absence is not related to the topics or the substance of the discussions, but in my view, is caused by the need for communication or internal reasons of the particular Churches. And despite their absence, we can say that 'now they belong to the audience.'”

Unfortunately it seems that His Beatitude attributes the thoughts and decisions of certain other hierarchs and primates of the Orthodox Churches merely to superficiality and a lack of information.

“Inter-Orthodox conflicts, caused by ethnophyletism, were, in my opinion, the first reason why so much time has passed in the preparations for this Council. Ethnophyletism is why the questions of autocephaly and the diptychs have not remained in the Council, and therefore it is also the reason why we need a canonical resolution to the diaspora question. In our era, when national borders are being abolished here and now, the Orthodox not only divide themselves, but make themselves a laughingstock, establishing a national feature to our ecclesiology and our Church identity.

The fundamentalist and fanatic groups, among which are theologians and hierarchs, which to a greater or lesser extent today are active throughout the whole Orthodox world, are a serious reason why a real threat of not only postponing, but even of canceling the Holy and Great Council loomed over it. The opposition of these groups to any idea of drawing nearer to other Christians has indirectly exerted influence on our local Synods, which undertook and are trying to introduce amendments into the texts and terms of the documents which were prepared by the pre-conciliar meetings. We have no illusions. For these groups, we are all in heresy and apostasy.

Athanasios6/29/2016 6:57 pm
Brothers; Sisters, Please!
In all things charity.
If we have not love, then we are just clashing cymbals and sounding gongs!
Maybe you are right about the Archbishop and the nature of this council, but God is love, and we are strong in our weakness and firm in love, and turning the other cheek is what we are called to do. Not all who call upon Christ will be saved, but those who do the will of the Father.
Remember, Christ said that whoever so much as calls his brother 'fool' will go to hell fire.
Let us not vent anger and insults on the internet, in public or even privately, but foster peace in our hearts and save thousands around us! Let us have respect for the office carried by our hierarch even if we do not feel much respect for the man currently occupying that office.
Love and Peace to you all, in the name of our Lord and Saviour, Jesus Christ.

Charlie6/24/2016 9:06 am
"National borders are being abolished" what does he say to the will of the British people? His friends have failed there just P. Bartholemew failed with the so called "great and holy council". People do not want borders abolished, only the elites want the borders abolished. But guess what bishop, the people are fanatical and decided to go against the will of your elitest comrades!! Seems like the people are not with you Bishop, so will you change your position now?

Carl6/24/2016 1:56 am
What's the deal with Jerusalem and Serbia? Are they just sitting back and accepting this? I hope Serbia walks out of the council. The devil is attacking the Church through this so-called Archbishop Chrysostomos, and many others just like him, infiltrators - may God have mercy on their souls.

Joan Swan6/24/2016 1:06 am
This commentary is so discouraging to me and the lack of charity expressed to those who,in good conscience, decided they could not attend, is outrageous. Instead of promoting unity, this is serving to separate us further from one another. I am a convert to Orthodoxy and for the first time in eight years, I am embarrassed to be an Orthodox Chrstian.

"We have no illusions. For these groups, we are all in heresy and apostasy.

He is absolutely correct! Those involved in this Robber Council are proclaiming heresy and approaching apostasy while they throw insults at those who are standing for the true faith. It is not unheard of in the Church. At one time, most of the hierarchs were Arians. But the truth will be able to choke out these weeds that the enemy has sown. The gates of hell will not prevail!!! The Holy Spirit will not permit this Robber Council to be accepted.

Anthony6/23/2016 8:22 pm
The fundamentalists and fanatics who uphold Orthodox dogma. As Saints like Mark of Ephesus were back in their day. This man warned Cypriots that they would go to hell if they voted in favour of the Annan Plan in 2004 - must think he's the Pope or something, speaking of whom he was very happy to meet when Ratzinger came to Cyprus. Every time Chrysostomos speaks, it is about politics and economics. Hardly ever speaks about the Church for some reason. Definitely in the wrong job role as a lot of us feel. I saw Chrysostomos last year in Pafos at the feast of Sts Peter and Paul. Arrived in his very expensive chauffeur driven car with personalised number plates - whilst a lot of Cypriots are suffering the ill-effects of a poor economy. Sorry but it's people like this who turn the laity away from the Church. Arrogance permeates through and through. Not judgement. Just plain fact.

Paok6/23/2016 8:18 pm
You are the filthy and heretical weed, bishop "chrysostom". You are a disgrace to the name you carry, and should really change your name to Dioscorus or Paulus who accused St. John falsely just as you accuse falsely those who follow St. John Chrysostom's holy teachings today. You and your group introduce new and false teachings into the Holy Church of Christ and even in your pathetic statemnet above you refer to the events of a secular world as your standard and justification of your diabolical ideas. Even when you pretend to be Orthdox the love for the ways of this world which lies under the sway of the evil one (1 John 5:19) pour fourth out of your heart (Matthew 15:18). The views you and the EP express are most certainly heretical and it is not us who says so, but the holy church fathers that you so adamantly reject for your love and desire to please your earthly masters. You are a hireling and do not care for the flock of Christ ( John 10:12-13). May God deliver us from such pseudo bishops as you and your Greek lodge member Bartholomew. St. John Chrysostom said that he fears no one more than the bishops, and it's because your kind has always existed inside the Church and it was voices like yours that called St. John a "fanatic" and "extremist" in his time while they defended and cozied up to the empress Eudoxia.
×