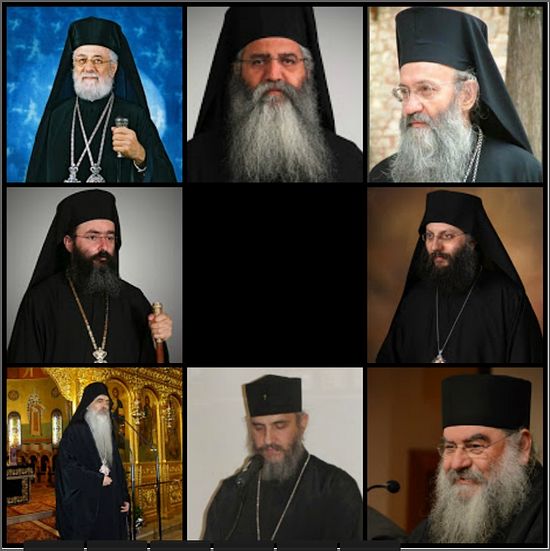 Greek media is reporting that at least two documents put forth by the recently concluded Pan-Orthodox Council on Crete were not signed by all delegates.

While the names of all delegate bishops from each of the ten represented Local Churches were added to each document by the Secretariat of the Holy and Great Council, there were those who abstained from signing the documents “The Sacrament of Marriage and its Impediments” and “Relations of the Orthodox Church with the Rest of the Christian World.”

It is reported that Met. Hierotheos (Vlachos) of Nafpatkos and Agios Vlasios, who had a lively debate at the Council with Met. John (Zizioulas) of Pergamon over the theology of personhood, withheld his signature from both documents.

Additionally, Metropolitans Athanasius of Limassol, Neophytos of Morphou, Nikolaos of Amathus, Epiphanios of Ledra, and Porphyrios of Neapolis of the Church of Cyprus, and Irinej of Bačka of the Serbian Orthodox Church withheld their signatures from the document “Relations of the Orthodox Church with the Rest of the Christian World.”

Unofficial information says that the number of Serbian bishops who refused is much higher.

The official site of the Morphou diocese has posted Met. Neophytos' declaration addressed to the Council in which he refers to the "Relations of the Orthodox Church with the Rest of the Christian World" document as “dogmatically vague” and calls its fruit “diplomatic compromises.” He makes several references to the words of Sts. Paisios and Porphyrios, as well as of Elders Sophrony (Sakharov) and Iakovos (Tsalikis) and other contemporary ascetics, stressing that the document is at odds with their teachings and insufficiently clear about the fact that the Orthodox Church is the sole bearer of the fullness of truth.

While it was previously reported that eight Metropolitans in all chose not to sign the relations document, Metropolitan Vasileios of Constantia and Ammochostos has personally stated that he did indeed sign all conciliar documents. Holy and Great Council: The Sacrament of Marriage and its Impediments

Holy and Great Council: The Sacrament of Marriage and its Impediments
The institution of the family is threatened today by such phenomena as secularization and moral relativism. The Orthodox Church maintains, as her fundamental and indisputable teaching, that marriage is sacred. The freely entered union of man and woman is an indispensable precondition for marriage. Jeremiah7/3/2016 3:35 am
I have no idea what kind of diplomatic and political pressures face our bishops. But I am exceedingly happy to see that several of them said, "No!" I don't condemn any of the others, but I am saddened to see them sign these documents. My bishop was one of them, and if I ever get a chance to talk with him, I would like to find out why he signed the documents and if he had any disagreements.

Fortunately, even with so many bishops signing the documents, they still only represent a minority of the Orthodox in the world.

Corey Robinson 6/30/2016 5:35 am
I agree that the articles in the "relations of the Orthodox Church with the rest of the Christian world" is very vague and contradictory. The title itself speaks to the ecumenist slant to the ecumenical patriarch. By definition, the rest of the "Christian world" teaches heresies worthy of anathema at most and error at least. Many of the articles put forth in the pan orthodox council have already been previously condemned by the 7 ecumenical councils, calling for the bishops and clergy to be deposed and monks and laity to be anathematized. This needs to be rejected by orthodoxy in toto.

Sergio Gutzalenko6/30/2016 1:22 am
I would like to raise the issue of what made so many Orthodox bishops agree with the confusion created by the Council. If one reads through the veiled and misleading wording of the preliminary declarations, it is quite obvious that the authors were deliberately opening up avenues to undermine the Orthodox Patristic tradition. However, all Local Churches' representatives signed the preliminary documents at Shambese - were they truly in agreement, or did they fail to read those documents?
Since the majority of the Churches' hyerarchs were still in agreement, after minimal revisions, with the texts approved in Crete - does that mean that most Orthodox Churches have already abandoned true Patristic tradition, that is, are guilty of heresy?

Srba6/29/2016 8:36 am
Irinej of Baka of the Serbian Orthodox Church is ecumenist, he does not belong to this list. He approves reforms in Liturgy, he even lit a candle in the synagogue - breaking the Canon 71 of the Holy Apostles: "If a Christian should bring oil to a Gentile altar, or to a Jewish synagogue during their feast-days, or light lamps, let him be excommunicated”

daniel e6/29/2016 6:21 am
The manner in which this council was convened has most Orthodox Christians throughout the world very concerned. Most of the issues have been settled in the first 7 councils. The exceptions seem to be regarding the 'diaspora' of overlapping jurisdictions and the question of autocephaly. (altho I have not studied the documents, only a brief list of topics. Which is also part of the problem: it was all prepared secretly)
Most Bishops were not invited, unlike the earlier councils and there is practically no debate allowed. This is more like a 'Papal' style, top-down system, not the counciliarity or traditional Christianity. Too, several of the major Orthodox nations/ArchBishops have not participated: Russia, Bulgaria, etc.
This seems to be a "Hopefully Holy and Small Council" and not what has been advertised? If so, it will simply be rejected world-wide over time by the Orthodox faithful and become moot.

Carl6/28/2016 4:21 pm
These brave Orthodox bishops are saints. Glory to God for their testimony in the face of heresy.

anthony6/28/2016 4:06 pm
Unsurprising. I know Met Hierotheos Met Athanasios and Met Neofytos. Athsnasios is the spiritual son of St Paisios and Met Neofytos the spiritual son of Elder Iakovos Tsalikis of Evia. Absolutely amazing figures in the Church. We are blessed to have men of such great and holy stature defending the holy church. Gods richest blessings upon them and the other Hierarchs defending Orthodoxy from the wolves.
×