A Christian Understanding of Freedom

On this Independence Day, July 4, we offer a word from the much-beloved Abp. Dmitri (Royster) which reminds us of the spiritual freedom in Christ that we ultimately seek as Orthodox Christians, of which our earthly freedom is a shadow and reminder. 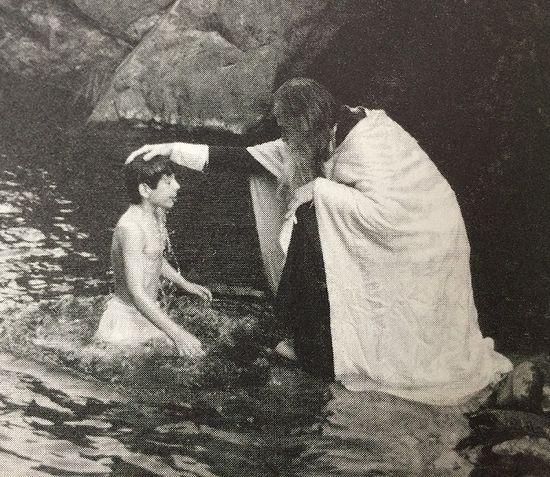 A child is baptized into freedom in Christ by Fr. Seraphim Rose

People generally use the word freedom in order to describe two things: the first and perhaps most persistent meaning of the term is simply lack of subjection to any kind of ownership or tyrannical authority, the lack of restriction of one’s actions, the absence of obstacles to self-determination or personal choices, the right to make up one’s own mind with regard to occupation, speech, assembly, religion and so on. Naturally, this kind of freedom is entirely desirable and, in many ways, our very nation came into being out of a deeply felt need for this. Although our democratic system of government has experienced many pitfalls and defects, and throughout the course of our history we have not always been able to achieve perfect freedom in the sense just described, it is none the less true that few would question the desirability for such freedom. Men are still willing to make enormous sacrifices—their very lives at times—for the ideal of freedom.

Christian teaching lies at the very heart of such an ideal. And in spite of the ups and downs of Church history, wherein even the Church has seemed to be an accomplice to agencies and forces that would deny this kind of basic right to the human race, it would be inaccurate to say that the Christian Church in most of its classical forms teaches that men are not destined to be free in this very sense. It is incompatible with Christian teaching to maintain that man should be shackled with restrictions against his personal freedom to pursue a way of life to his own choosing.

At the same time it appears also that freedom is being increasingly applied to a kind of license which says that man is not to be subjected to any kind of restriction that is not to his liking. Even when the common good demands the contrary he is somehow to be free to "do his own thing." The blame for much of the disorder and confusion of our own times could perhaps be laid to this concept of freedom: the near capitulation of our legal system in face of demands for freedom to peddle pornography, to sell drugs, to defy the law enforcement agencies of the cities, etc.

In this particular article it is not our intention to dwell on the matter of freedom as described above, making this a plea for law and order. Rather, we wish to present a general account of the Orthodox Church’s understanding of freedom, in light of Christ’s work of redemption, His "breaking the chains of hell and overthrowing the tyranny of hades." 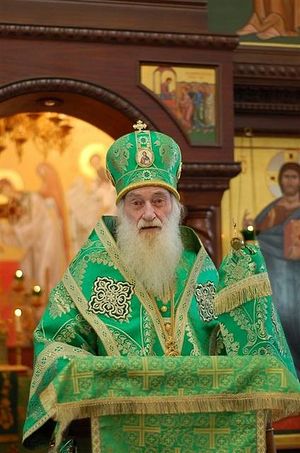 Abp. Dmitri (Royster)
Jesus said, If you continue in my word, then you are my disciples indeed; And you shall know the truth and the truth shall make you free" And those who heard Him said, "We are Abraham’s seed, and we were never in bondage to any man, how sayest thou, you shall be made free?" And He answered, Verily I say unto you, Whosoever committeth sin is the servant of sin (1 John 8:31-34).

He said in another place, I am the way, the truth and the life; no man cometh unto the Father, but by me. If you had known me, you should have known my Father also; and from henceforth you know Him, and have seen Him (John 14: 6-7).

Jesus Christ is the truth about God and the truth about man, since He is both God and man. God’s real nature is completely revealed in the Son of God, the Incarnate Word, and the whole truth about man, his worth, value and dignity, are realized and made manifest to man in the Son of Man, Jesus of Nazareth. And since man’s fundamental sin was and is godlessness or atheism, we then understand what is meant by the statement that "Christ came into the world to save His people from their sins."

An author once pointed out that, "Mankind is in bondage until Christ sets men free." St. Paul in the Epistle to the Romans says, For when you were the servants of sin, you were free from righteousness. But what fruit had you then from those things of which you are now ashamed? For the end of those things is death. But now set free from sin and become servants to God, you have your fruit unto holiness, and as your end, life everlasting (6:20-22).

The deepest and most fundamental of the Church’s understandings of freedom is simply the freedom from sin and its wage or consequences. The understanding that Christ has given to men a freedom that cannot be taken away, no matter what the external circumstances of life may be, has provided the strength, the dynamism, the very life of the Church in the different periods of her bondage, her restrictions. There was the long three century persecution of the Church by the Roman Empire, and the very martyrs were witnesses and advocates of their freedom in Christ. The Moslem conquest and domination of much of the world that had been Christian, and the reduction of Christians to second-class citizenship, the restrictions against their proclaiming the Gospel, brought no despair to those who knew Christ and His truth. This lasted well into the nineteenth century in certain places. And in our own twentieth century, restrictions and persecutions, perhaps heavier and more severe than in any other time, in Communist lands failed to extinguish the light of Christian truth, and finally the most essential Christian freedom.

It is in Christ, as perfect Man, that man comes to the full realization of what it means to be in the image and likeness of God. For man’s freedom is an Icon, an image of the Divine Freedom itself.

It is just when our freedom lies within the "opus Dei," the work of God, that it does not cease to be true freedom. The Let it be to me according to thy word, of the Virgin at the Annunciation does not come from a simple submission to His will, but that very acceptance expresses the ultimate freedom of her being. In this sense, she was the first fruits of the intervention of God into human time and history, the first product of the Incarnation. She is the image of the Church, those who receive the Word of God and keep it, of those who would lose their life and gain it.

Christ, in becoming Incarnate, has permitted us, not to imitate, but to relive His life, to conform ourselves to His essence.

In each Christian’s response to God, in saying, "let it be to me according to Thy will," he identifies himself with the God-Man Christ, and in this way, the Divine Will, freedom comes as an expression of one’s own will. The will of God, His work, His freedom have become one’s own. It is no longer I who live, but Christ who lives in me, says St. Paul (Galatians 2:20).

None of the foregoing is said to diminish or to negate in any sense the validity and importance of all human beings, especially Christians, to seek, to work for freedom in the usual earthly, if you will, sense of the word: social justice, equality, and the right to pursue, unrestricted, a better life here and now for the human race. The Christian, if he takes his commitment seriously, can never be guilty of putting restrictions in the path of others, of coercing, of forcing. On the other hand, what has been said is conceived as a reminder that much of the Christian world, my own Church, has a long experience of this, has lived under repression in places where freedom, justice, equality, and the right to differ, were given lip-service, but were not realities. The hope of Christians, their consolation is based on a higher freedom, which only God can give, which our Lord Jesus Christ showed us. Freewill
Abbot Tryphon
One of the primary differences between Islam and Christianity has to do with the basic view of the nature of God. Islam teaches total surrender to a god who demands submission. There is no invitation to enter into a relationship, freely, nor is there room for an individual to choose, or not choose, to love his Creator, for the god of the Muslims is far above his creation, and there is no real possibility of having a personal relationship with this god.