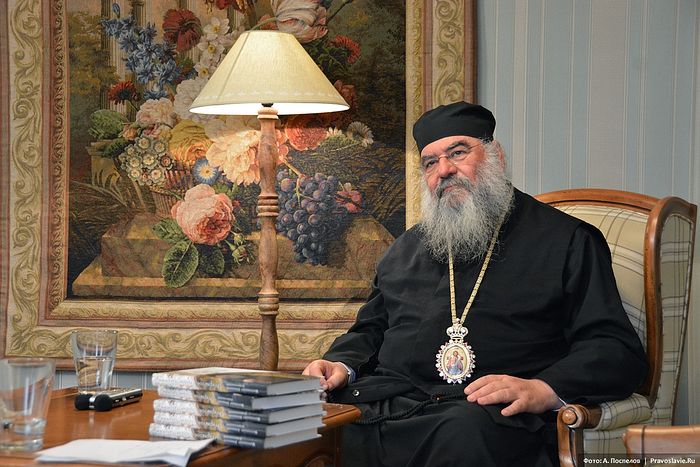 Because of the confusion among faithful Christians concerning whether I finally signed the text of the Holy and Great Synod with the title “Relations of the Orthodox Church With the Rest of the Christian World”, I desire to inform those who are interested that for reasons of conscience, because I disagree with the text in its final form, I did not sign it.

I am publishing here as well my written opinion which was submitted to the Holy and Great Council regarding this text.

I write these things simply to set the record straight, always with great reverence and respect towards all.

Written Opinion of Metropolitan Athanasios of Limassol, Church of Cyprus

To the Holy and Great Pan-Orthodox Synod of the most holy Orthodox Church,

Concerning the text of the 5th Pre-Synodal Pan-Orthodox Meeting which occurred in Chambesy-Geneva from the 10th to the 17th of October in 2015 and which bears the title “Relations of the Orthodox Church with the Rest of the Christian World”, I have to state the following:

I am in total agreement with the first three articles of the text. However, from Article 4 onwards, I have made the following observations: “The Orthodox Church has always prayed 'for the union of all'"—I believe this to mean the return to and union with Her of all those who broke away and distanced themselves from Her, of heretics and schismatics, once they have renounced their heresy and schism and flee from those things with repentance and are integrated and joined—united—with the Orthodox Church in accordance with the teachings of the sacred canons.

The Orthodox Church of Christ never lost the “unity of faith and the communion of the Holy Spirit” and does not accept the theory of the restoration of the unity of those “who believe in Christ,” because it believes that the unity of those who believe in Christ already exists in the unity of all of Her baptized children, between themselves and with Christ, in Her correct faith, where no heretics or schismatics are present, for which reason She prays for their return to Orthodoxy in repentance.

I believe that what is stated in Article 5 regarding “the lost unity of Christians” is incorrect, because the Church as God’s people, united among themselves and with the Head of the Church which is Christ, never lost this unity and therefore is not in need of rediscovering or seeking it, because it always was, is, and will be just as the Church of Christ has never ceased nor will cease to exist. What happened is that groups, peoples or individuals left the body of the Church and the Church prays, and is required to try through mission, that they all return in repentance to the Orthodox Church via the canonical route. Put simply, if we wish to be precise in our definitions, there are no other Churches; there are only heresies and schisms.The expression “towards the restoration of Christian unity” is incorrect because the unity of Christians—the members of the Church of Christ—has never been broken, as long as they remain united to the Church. Separation from the Church and flight from the Church has unfortunately happened numerous times due to heresies and schisms, but there was never a loss of the internal unity of the Church.

I am led to wonder why in this text there are multiple references to “Churches” and “Confessions”? What is the difference? What element characterizes some groups as Churches while others are named Confessions? What is a Church as opposed to a heretical or schismatic group or confession? [As for ourselves], we confess [that there is] one Church and all other groups are [merely] heresies and schisms.

At no point does this text state that the only way that leads to union with the Church is solely the repentant return of heretics and schismatics to the One, Holy, Catholic and Apostolic Church of Christ, which according to Article 1 is our Orthodox Church.

The reference to the “understanding of the tradition of the ancient Church” gives the impression that there is an ontological difference between the ancient Church of the Seven Ecumenical Councils and the genuine continuation of the same until the present day, namely our Orthodox Church. We believe that there is absolutely no difference between the Church of the twenty-first century and the Church of the first century, because one of the attributes of the Church is the fact we also confess in the Symbol of Faith, namely that it is Apostolic.

The reference of the text to “the World Council of Churches” gives me the opportunity to make a complaint against theoccasional syncretistic, uncanonical events which took place therein, but also against its title, since it regards the Orthodox Church as “one of the Churches” or a branch of the one Church which seeks and strives for Her realization at the World Council of Churches. For us, however, the Church of Christ is one and unique, as we confess in the Symbol of Faith, and not many.

The view that the preservation of the genuine Orthodox faith is guaranteed only through the synodical system as the only “competent and final authority on matters of faith” is exaggerated and ignores the truth that many synods throughout Church history taught and espoused incorrect and heretical doctrines, and it was the faithful people which rejected them and preserved the Orthodox faith and championed the Orthodox Confession. Neither a synod without the faithful people, the fullness of the Church, nor the people without the synod of bishops, is able to regard themselves as the Body of Christ and Church of Christ and to correctly express the experience and doctrine of the Church.

I understand, your All-Holiness and my holy brothers of this Synod, that the use of hard or insulting language cannot be made in ecclesiastical texts of this kind, nor do I think anyone desires the use of that form of expression. However, the truth must be expressed with precision and clarity, though naturally with pastoral discernment and genuine love towards all. We owe it also to our brothers who find themselves in heresy or schism to be entirely honest with them, and with love and pain to pray and do everything possible to bring about their return to the Church of Christ.

I humbly maintain that texts of such importance and prestige as those of the Holy and Great Synod of the Orthodox Church must be very carefully formulated with theological and canonical precision in order that these ambiguities or untested theological terms do not also give rise to incorrect expressions which could lead to misconceptions and distortions of the correct attitude of the Orthodox Church. Moreover, in order for a Synod to be valid and canonical, it must not depart in any way from the spirit and teaching of the Holy Synods which preceded it, the teaching of the Holy Fathers and Holy Scriptures, and it must be free from any ambiguity in the precise expression of the correct faith.

Never did the holy Fathers nor ever in the holy canons or rulings of the sacred Ecumenical or Local Synods, are heretical or schismatic groups referred to as churches. If the heretics are indeed churches, where is the single One Church of Christ and the Apostles?

I humbly express my disagreement with the fact that the practice of all Sacred Synods until the present of allowing each bishop a vote is abolished. There was never before a system of “one Church, one vote,” which renders the members of the Holy and Great Synod, with the exception of the primates, mere decorative items by refusing them the right to vote.

I have several other disagreements and objections concerning other points in the texts [of the Synod], but I do not wish to tire you any further, and for this reason, I am limiting myself to those issues which I consider to be of the utmost importance and [concerning which] I humbly express my disagreement, my perspective and my faith.

I do not wish with what I have written to grieve anyone nor do I desire to appear to teach or judge my brothers and fathers in Christ. Simply, I feel the necessity of expressing what my conscience dictates to me.

I ask that my views be recorded in the acts of the Holy and Great Pan-Orthodox Synod.

Seeking your holy prayers, I remain

The least among the brethren in Christ Why I did not sign the text “Relations of the Orthodox Church with the Rest of the Christian World”
Met. Hierotheos Vlachos Archbishop Chrysostomos of Cyprus accused bishops, theologians, and laity critical of Holy and Great Council of fundamentalism in speech at opening of Crete Synaxis
"The fundamentalist and fanatic groups, among which are theologians and hierarchs, which to a greater or lesser extent today are active throughout the whole Orthodox world, are a serious reason why a real threat of not only postponing, but even of canceling the Holy and Great Council loomed over it."