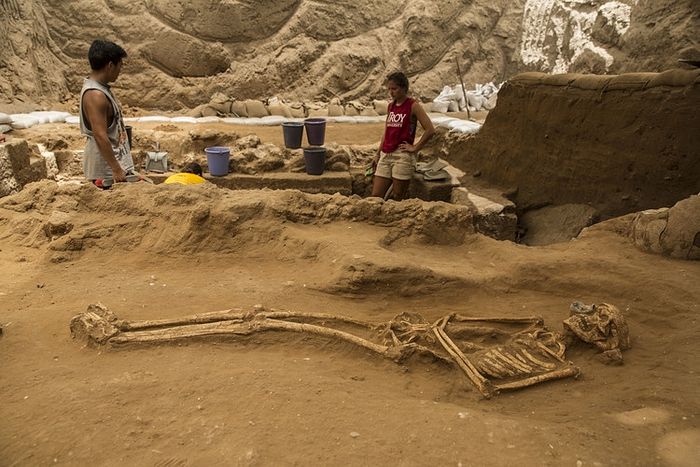 Goliath’s death is described in gruesome detail in the Bible, but how the Philistine champion would have been laid to rest has been a mystery. Scientists now say an extraordinary find may lay that giant enigma, much like the biblical villain, to rest.

Archaeologists digging at the southern coastal city of Ashkelon announced Sunday the discovery of the first cemetery belonging to the ancient Israelites’ dreaded and shadowy nemeses, the Philistines.

Speaking to the press at Jerusalem’s Rockefeller Museum, Daniel Master, one of the heads of the Leon Levy Expedition, said the cemetery, “the final great discovery” after 30 years of excavation of Ashkelon, could help shed light on the origins and customs of the Philistines.

The discovery of a sizable cemetery, with over 210 individuals, at a site conclusively linked to the Philistines, was a “critical missing link” that allows scholars “to fill out the story of the Philistines,” said Master, a professor of archaeology at Wheaton College.

The cemetery, discovered just outside the ancient city walls and dated to between the 11th and 8th centuries BCE — a period associated with the rise of the Israelites — may contain thousands of individuals, providing an abundance of material to study, he said.

With that broad a population, “we’re going to be able to reconstruct what the Philistines as a group were like,” Master said. 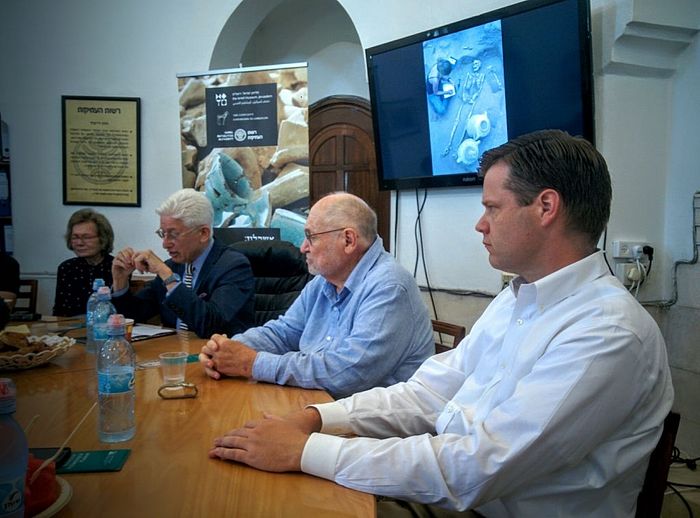 
The announcement was timed to coincide with the opening of an Israel Museum exhibit showcasing finds spanning 6,000 years from Ashkelon at the Rockefeller. Among the items on display are 3,800-year-old city gates, gold and silver jewelry demonstrating its commercial prominence, and a Roman marble slab etched with Crusader and Fatimid inscriptions.

Throughout much of its 22 layers of settlement, Ashkelon was a “great seaport,” situated on the Mediterranean and on the main coastal trade route,” Harvard University’s Larry Stager, co-director of the dig, said. It was significantly larger than cities inland during the Bronze and Iron Age, with 10-12,000 people, because it could sustain greater population through commerce. 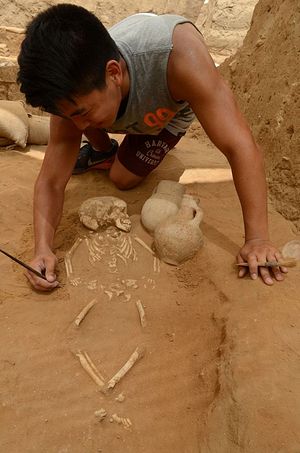 A student excavates a 10th-9th century BC burial in the excavation of the Philistine cemetery by the Leon Levy Expedition to Ashkelon. (Melissa Aja /Leon Levy Expedition)
Ashkelon was one of the five main Philistine cities for six centuries — , along with Gaza, Ashdod, Gath and Ekron — from the 1100s BCE down to Ashkelon’s destruction by Babylonian king Nebuchadnezzar’s army in 604 BCE.

“There have been other random finds of people caught in Philistine destruction on occasion,” he explained, “but nothing like this. No systematic example of what they thought about death and how they treated people in that process.”

Isolated graves containing Philistine style pottery were thought to be possible examples of their practices, but the few cases were not enough to convince most scholars.

“What we needed for a Philistine cemetery was to find a large one that was directly connected to one of the cities we know as a Philistine city,” Master said. “And Ashkelon is exactly that.”

Scholars believe the Philistines were among a number of tribes of non-Semitic peoples who migrated across the Mediterranean — possibly from modern Greece and Turkey — and settled the Canaanite coast in the early Iron Age. 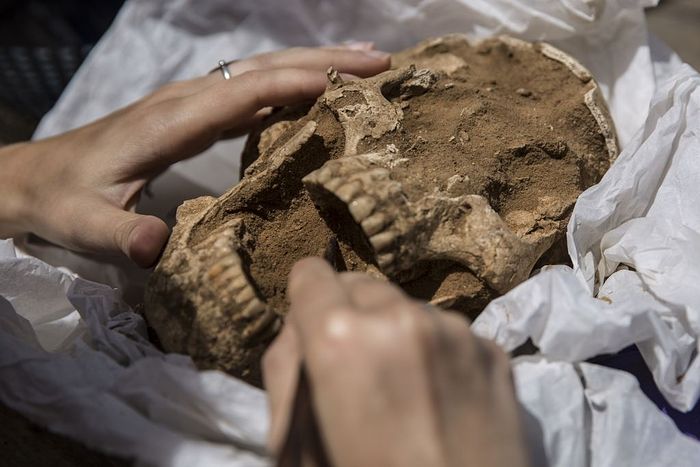 
Ancient Egyptian accounts describe hordes of “Sea Peoples” arriving by ship to the shores of the eastern Mediterranean in the late 13th and early 12th centuries BCE. During the reign of Ramesses III, hordes of seaborne people bore down on the kingdom, were thwarted by the Egyptian armies and settled along the Levantine coast. Among the groups mentioned in the reliefs of Ramesses III’s mortuary temple at Medinet Habu are the “Peleset,” whom scholars associate with the Philistines.

“Ninety-nine percent of the chapters and articles written about Philistine burial customs should be revised or ignored now that we have the first and only Philistine cemetery,” said Stager, Dorot Professor of the Archaeology of Israel, Emeritus, at Harvard University, in a statement.

Master said that there were no clear connections between Philistine funerary practices found in Ashkelon and any particular group from the Aegean, but DNA analysis of the remains could determine the proximity of relatedness to other populations in the region and point to the peoples’ origins.

The Philistines at Ashkelon were buried in pits along with personal items, or sometimes cremated or buried in multi-chambered tombs.

Canaanites and Israelites, by comparison buried their dead in cave tombs, then collected the bones after the flesh decomposed. Philistine dead, Master said, once buried weren’t disturbed, indicating the group held “different cultural ideas about what death meant and what the afterlife meant.”

“As we look at the distinctive burial practices, we get a sense for how they treated and thought about death and the afterlife in different ways from the people around them,” Master said.

Study of the bones found in the cemetery already pointed to physiological differences in the Philistine population from their Canaanite predecessors and Israelite neighbors. DNA tests whose results are forthcoming may provide additional information about their origins.

Examining the remains has only just begun, and scholars are “only just scratching the surface” of how the Philistines lived and died. 2,500-Y-O Judah Soldiers' Handwriting Discovery Proves God's Word Is True, Answers in Genesis Says
If history has taught anything, it's that eventually research and science will confirm Scripture. We have an imperfect and incomplete understanding of history and science, but God's Word was ultimately written by the God who was there and who never lies. Remnants From Ancient Church Unearthed in Gaza by Construction Workers

Remnants From Ancient Church Unearthed in Gaza by Construction Workers
Archaeologists think pillars discovered say may be part of a Byzantine church dating from around 1,500 years ago.