St. Paisios the Athonite: The Comforter of Souls

Saint Paisios the Athonite brings solace to every soul

Elder Paisios has no need of any praise or introduction from us. With his imitation of Christ’s love, he satisfied both God and other people and this is why he’s widely praised in the Church of God.

He had the rare gift of being able to bring solace to people of all works of life, irrespective of their level of education or their spiritual state. I remember the case of a psychiatrist/psychoanalyst who came to visit out monastery after an encounter with the Elder. Not only had he found peace, but he also told me that what the Elder had said to him was the last word in modern psychiatry. It’s well known that the Elder didn’t read books, other than the Gospels and Abba Isaak the Syrian.

If it was to bring solace to a soul, he would spare neither time nor effort. There was once I was curious to know how he was able to cure a young man with severe psychological problems. Out of respect, I didn’t ask him. Years later he satisfied my curiosity as follows: "When people have a problem you have to listen carefully, for as long as they’re talking and not give any sign that you’re tired, because then you’ll lose everything. Well, I listened to that young man one day for nine hours, without moving. That’s when my insides were damaged." It wasn’t the only time that the sacrificial love of Father Paisios worked a miracle.

On another occasion, when I asked him about a difficult problem I’d encountered in confession, as a spiritual father, he told me: "Listen, father, when you become a spiritual father, you have to be prepared to go down into hell for those you confess. Otherwise, don’t bother. But what I have to say is that, if you go to hell, you’ll make it paradise, because you’ll have love." Amazing advice, that only a God-bearing person would be able to give.

It’s well known that, in the last thirty years, Our Most Holy Lady has ensured an influx of new monks to the Holy Mountain. Father Paisios was one of those elders who helped many young men to take the decision to become monks. He even helped many young monks to take root on the Holy Mountain and to bear fruit. We felt him to be at our side in our struggle to take pastoral care of our young monks, a coach for many who were fighting the devil, the passions, the world. 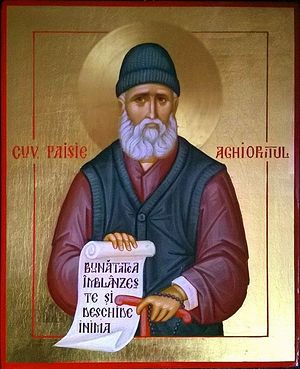 The Elder often advised us to have spiritual dignity and generous pride. These were the virtues that distinguished him, too, as everybody knew who met him. I once went to visit him in his old kelli of the Precious Cross and after our chat I said goodbye to him, but he accompanied me for quite a way. As soon as I told him not to tire himself out and to go back to his kelli, he said goodbye and went back. If I hadn’t said anything he’d have gone with me as far as our representative’s house in Karyes.

I should also say that he rarely showed his gift of foresight and never to show off, but only for the benefit of souls. Once a young monk visited him. The young man was having bad thoughts about his abbot, who refused to have a short jacket made for him. Before the monk said a word, the Elder said to him: "What are these thoughts you’re having about your abbot not giving you a jacket?"

He used to comfort young monks when they were troubled by some weakness they had, such as jealousy, which he called faults of immaturity. Naturally, he told them to grow up and get over them.

Father Paisios was also outstanding as regards the highest of all the virtues—discrimination. He was able to help every soul to discover its true inclination and the direction given it by God, so that it could find its own tranquillity.

His love embraced the whole world. He helped so many people, particularly the young, to live a Christian life in the outside world and in a family.

When you talked to the Elder you felt you were in the arms of God.

It ought also to be stressed that Father Paisios was very sensitive to dogmatic issues. He once wrote to me that "Dogmas don’t enter the European Union." In this he followed the path of all the holy Fathers, who believed and confessed that it was not only virtue but also the Orthodox faith that people needed to be saved.

His holy life was corroborated by his holy death. He accepted his painful illness as a gift from God and rejoiced at the thought that Christians living in the outside world, and who were suffering from the same illness, would find comfort in the fact that monks were also susceptible to it.

He had overcome any love of self. He wasn’t concerned about his own illness, but when he was on his bed of pain he continued to think about his fellow-sufferers. Even in the last days of his life he was interested in people’s problems. A God-fearing couple came to see him only a few days before he passed away. They had unmarried daughters and he told them: "I’m giving you a direct order to make sure that your daughters are properly set up." Through his prayers, his command and desire came to pass.

May your memory be eternal, venerable Elder. We’re grateful for everything you’ve given us, for your consolation, and for your teaching, both through what you’ve told us and through the way you lived. Pray that we may follow your footsteps as you did those of Christ our Saviour. The Feast of St. Paisios the Athonite
Commemorated June 29/July 12

The Feast of St. Paisios the Athonite
Commemorated June 29/July 12
O beloved Father Paisius, thou that didst ascend the rungs of holiness and become perfect in virtue, therefore gaining boldness before our Merciful God, do thou pray to Him, Whom thou didst serve unceasingly all thy life, not to let us perish for the multitude of our sins, but to turn us back to blessed repentance.

Elder Paisios on Spiritual Study
An Excerpt from Spiritual Awakening
St. Paisios the Athonite
First, they should read the New Testament to learn the meaning of Christ, to be shaken up a little; later they can read the Old Testament. Do you know how hard it is when they have read nothing and yet they come to ask for help? It is like an elementary school child going to a university professor and saying, “Help me.”
Comments
×