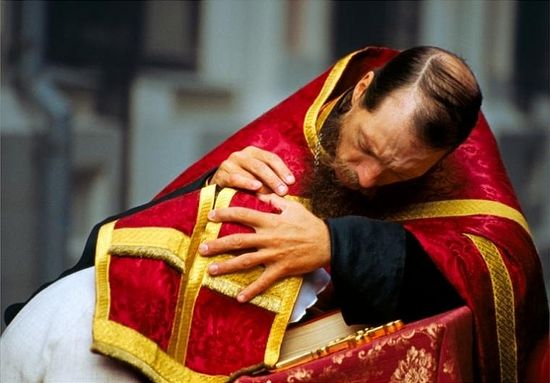 Thousands of women in Ukraine, Russia and Belarus have taken to social media to share their experiences of sexual violence in an online flash mob under the hashtags #янебоюсьсказати and #янебоюсьсказать (I am not afraid to speak) started by Ukrainian social activist Anastasia Melnichenko.

Russia has responded, with the Russian Orthodox Church at the forefront.

Archpriest Dmitry Roschin, head of the synodal department for church governance with the public and the media, advised women participating in the online flash mob to turn to priests instead of posting their stories on Facebook. According to Roschin, the sexual harassment narratives these women share on social media could be then used against them.

“The church provides a worldview that has answers to all questions of human life,” Roschin was quoted saying by news website paperpaper.ru on Thursday. “That being said, the right to participate in the movement still belongs to everyone.”

Hieromonk Makary, host of the online project “Questions for a Priest,” believes that there is certain information, particularly stories of sexual violence, which should not be divulged to the general public, but to psychologists, police or priests.

Makary said that some female activists suffer from “exhibitionism— particularly with sexual, social and other roots.” He added that these flash mobs qualify as exhibitionism and should not be disclosed to the public, RIA Novosti reported.

“[Facebook administrators] sent me a notification yesterday, saying that I'd supposedly posted something that doesn't comply with Facebook's rules. And then it turned out that my account had been suspended temporarily, to check to make sure it's not fake,” Melnichenko said, the Meduza news website reported.

Melnichenko suspects that this was probably due to a barrage of coordinated complaints about her account made by Facebook users, according to the news source. “It's clear that this is connected to the flash mob,” she told Meduza. “It's just that Facebook is my personal mass-media outlet. I use it to communicate with the world, and so I'm in a state of mild panic right now.”

Xenia7/16/2016 5:35 am
To combat against this evil, priests must narrate the live of the saints & martyrs to these survivors to combat them away from homosexuality, abortion, suicide, and nihilism. Priests mus tell the survivors that the saints, martyrs, angels, & the departed souls are sharing in their pain with them just as the Church does. The Church can be the striving force in working to catch these predators that are either worshiping with them as "rapists, predators, molesters, and abusers" or are in other places. Even more, priests must also advocate to men and women that they must step away from their abusers. You can't holds with God and the devil at the same time. For the Church to tell Women that they shouldn't post online because information can be used against them, it as though the church, itself, is using that very same information against Women by saying, "Don't post online. This will create a chance, where others indoctrinate in you with their mindless beliefs. Come to me. Our beliefs are better. We can help you. I offer all the answers." ----- The more someone tries to be your spiritual father, the more they are not and they only want to shove down their beliefs into your throat. It's very prideful. This only shows that the The Church is standing as the better person, an unblemished lamb, innocent of all sin----where in reality & Where there is a God who sees everything from above---we all Sin.

Xenia7/16/2016 5:35 am
To better combat sexual violence, priests can help these survivors by saying that its okay for them to feel angry& emotion, but it's not okay for them to feel angry in such a way that they have a hate for every single person or human being. To tell someone to not feel angry or sad about something---It will only make them feel more angry as it will give them the idea, "It's okay not to feel this way. I am not normal. I hate myself." It locks their emotions. Even worse, it leads them into a deadly, dark abyss called "Nihilism", where life is meaningless. Father Seraphim Rose has even about this. He's said, "The Nihilism of our times exists in all "and those who do not, with the aid of God, choose to combat it in the name of the fullness of Being of the living God, are swallowed up in it already. We have been brought to the edge of the abyss of nothingness and, whether we recognize its nature or not, we will, through affinity for the ever-present nothingness within us, be engulfed in it beyond all hope of redemption--unless we cling in full and certain faith (which, doubting, does not doubt) in Christ, without Whom we are truly nothing...." Taken from, http://www.desertwisdom.org/dttw/resurrection/radical-catacomb-teaching.html

Xenia7/16/2016 5:34 am
I can understand the Russian Orthodox Church's concern---by allowing for women to voice their opinion online, this will cause heresy to spread into the church. As continual, constant uncritiqued opinions do spread heresy, this will stem forth beliefs where Women might turn to homosexuality, abortion,liberalism, extreme feminism, and other lewd acts. I can understand the Orthodox Church's concern for them & I stand with them on that. It's spiritually helpful for Women to not share their stories online. To keep one's emotions locked inside and not write about them---- It will only cause your heart to become tensed and your emotions to go angrily out of balance---- At this point, anything can happen. People, who don't share their experiences, can be narcissists or psychopaths. Even worse, it will cause these survivors to turn realize that no hope exists & they will turn to suicide.

Xenia7/16/2016 5:33 am
Not all Women who share their traumatic experiences of sexual harassment, rape, and molestation are exhibitionists. Not all of them are feminists either. Some of them just can't stand the pain and want to voice what's happened to them because they want others be aware of what's out there& what to be careful of & what to get away from.

Now, my question to the Russian Orthodox Church is, "What happens if these predators, rapists, or molesters are within your own church and worshiping alongside believers every Sunday Morning?" Clearly, they can't be coming to church and then go back into the World to be perform their "acts of the mercy". That would be very similar to 'Consciously walking with God and Holding Hands with the Devil at the Same time" So, is the Russian Orthodox Church more concerned with the fact that divorce might rise high in their church if these women will start to divorce their husbands, * who are predators behind closed doors*, behind closed doors? Is the church more concerned for the safety of women, away from these sick predators, or are they more concerned in gaining more believers?

Xenia7/16/2016 5:33 am
For the Russian Orthodox Church to say, "Women participating in the online flash mob should turn to priests instead of posting their stories on Facebook. The sexual harassment narratives, these women share on social media could be then used against them", that is also like saying, "Women should stop posting their "narratives" online because it attracts attentions to lots of other people. It will also attract attention to even corrupt people, who will eventually use their narratives against them. So, instead of attracting attention and "getting others to feel bad for you", the church, with its "picture-perfect" priests, will open its arms to you. You can just report it to the church and everything will be okay"

Because it is common trait of the Abuser/Rapists/Harasser/Child Molester to display a submerged exhibitionism of soo acting nice to everyone around them so that when the survivor does saying something against them no will ever believe them. For the Russian Orthodox Church to say that "Women must not post online about these sexual harassment narratives, that they face"......it is only igniting the fire of the devil as it will allow predators, murders, rapists, and thieves to sit back and smile as Women are silenced.

Xenia7/16/2016 5:32 am
-----"Sexual harassment narratives these women share on social media could be then used against them".-----
We are all human, aren't we? Some of us have feelings of extreme jealousy, hate, pride, *feelings of wanting to feel bad for one another*. Doesn't the church think that even "Priests" display those feelings too behind their black garments of repentance?

In fact, certain Priests& Psychologists use what's called a 'Questioning method or Verbalization" when associating with a rape survivor or sexual harassment survivor's account. They constantly question the survivor and randomly say the things that come to their mind to fill up space ..or they just stay completely quiet as the survivor recites his or her "narrative". Doesn't the church think that after a priest hears a survivor's narrative that he could possibly end up showing some type of favoritism towards * Orthodox Christian families& people, who are trouble-free and do not come to him with these "narratives" of sexual harassment?"

Xenia7/16/2016 5:31 am
I completely disagree with this. Not all priests, psychologists, or police are "blemish-free". For the Russian Orthodox Church to say that "Women must only go to Psychologists, Priests, or Police" to divulge their "narratives" of sexual harassment/violence is downright oppressive and it's beginning to how the Church is smiling at God, while holding hands with Predators. I am no liberal & I certainly no feminist either. But, I am an Orthodox Christian & I definitely have seen enough corruption to say that not all Priests, not all Psychologists, not all Police Officers are picture-perfect as we may think that some of them seem to be. In fact, there are some priests, who aren't really priests & listen to people's confessions "just for the sake of being a priest".