Maxim Kostenko. The all-Ukrainian procession of the cross: the final stage 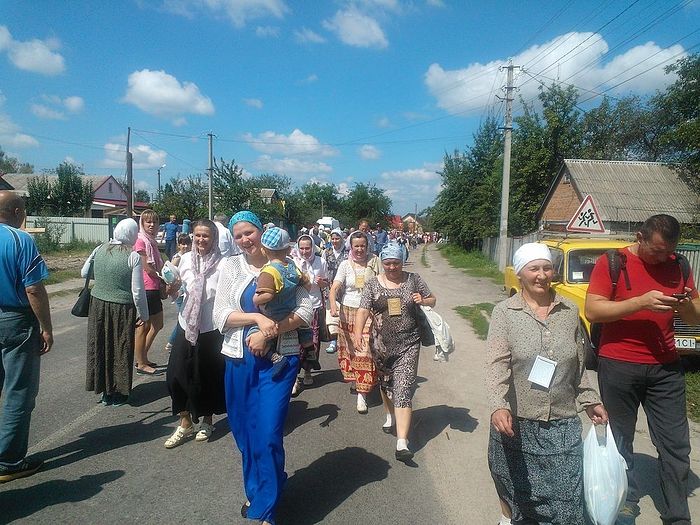 Glory be to God, the All-Ukrainian cross procession for peace has already arrived in Kiev and prayed on St. Vladimir Hill, and despite all sorts of provocations and threats, they have reached their goal. This report describes this now historic event as the procession approached Kiev.

Both the east and west wings of the all-Ukrainian procession of the cross are currently approaching Kiev. The pilgrims have hundreds of miles and thousands of various trials behind them. There is just one step ahead – to enter the holy city of Kiev where believers from different regions of the country will unite in their prayer for peace in the Ukraine. Symbolically, it will be the spiritual unity of the principal spiritual centers of the state – the Kiev Caves Lavra and the Lavras (Pochaev and Svyatogorsk) from which several weeks ago two columns of pilgrims started walking towards each other.

However, not all welcome this prayer for peace. There are certain forces that are willing to exert maximum effort so that the spiritual and peacemaking missions of the canonical Ukrainian Orthodox Church should fail.

On the whole, there are several categories of opponents of the cross procession.

The first category includes supporters of the so-called “Kyiv Patriarchate”. For this religious organization, the all-Ukrainian cross procession is a real strategic defeat because it has demonstrated that the canonical Ukrainian Orthodox Church (UOC MP) is the only genuine Church in the Ukraine and only She is supported by all regions of the country. 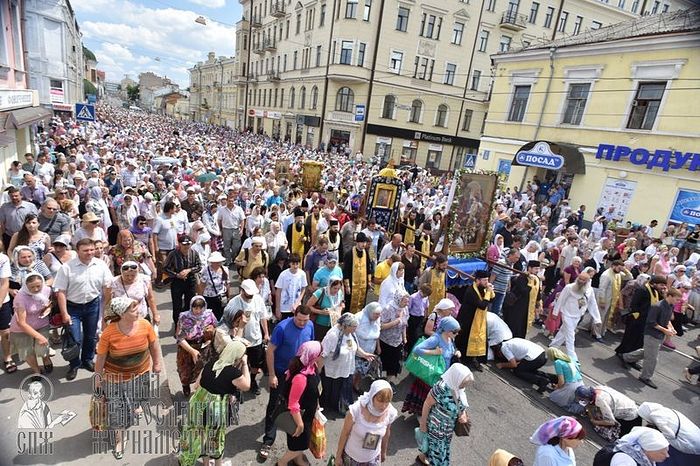 What’s more, the prayerful procession has refuted the results of numerous public opinion polls which recently were actively cited by “Kyiv Patriarchate” speakers. “On paper”, the figures were encouraging: “forty per cent of the population support the “Kyiv Patriarchate”, while the number of members of UOC MP has dropped below fifteen per cent” and so on. But the reality has demonstrated that these are biased assessments. By the most modest estimations, over 50,000 believers walked in the cross processions across the regions.[1] Thus, in Kharkiv the column of believers numbered 10,000 people. There was a similar situation in the Western Ukraine; for example, in Pochaev and Korets. 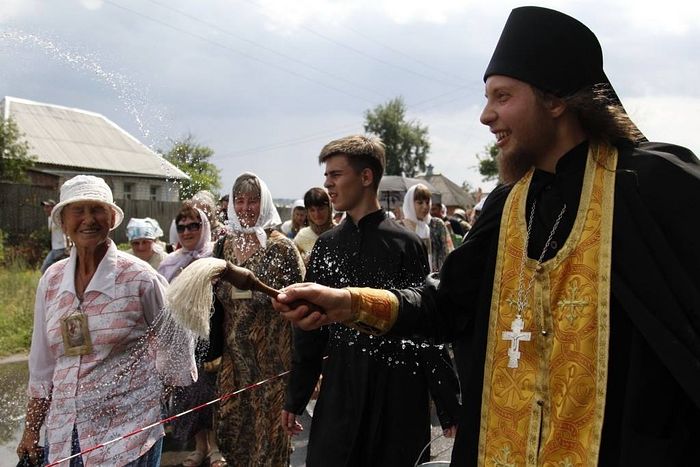 They are striving to politicize the process: they claim that someone saw ribbons of St. George, flags of the unrecognized Donetsk People’s Republic and Lugansk People’s Republic and Russian symbols in the procession. However, these insinuations are totally groundless, because every day both the east and west columns of the processions are accompanied by law-enforcement officers. Among other things, they have been filming the whole course of the procession. Had they detected something illegal, it would have been made public straight away, and appropriate measures would have been taken.

In this context, one recalls the recent scandal with “a ribbon of St. George” in Kharkiv. Significantly, a respective “photograph” allegedly showing “a prohibited object” in the cross procession remained the one and only “proof of the unreliability” of UOC MP, and respective media have used it. Interestingly, the same information of “the ribbon” was later repeated by many other media. So, numerous “experts” began to warn that “a crowd of provocateurs” with St. George’s ribbons and flags of the unrecognized republics was drawing near Kiev.

By the way, the mentioned “experts” make up the second category of the cross procession’s opponents. This situation gives them an opportunity to remind everybody of their existence. A year and a half ago they ardently predicted “a quick victory in Donbass” before cameras. But time went on and their predictions never came true, and this automatically cast doubt on their competence. So the present hysteria around the cross procession gives them a chance to restart their information career. After all, now they have more than enough arenas for expression of their “accurate predictions”. 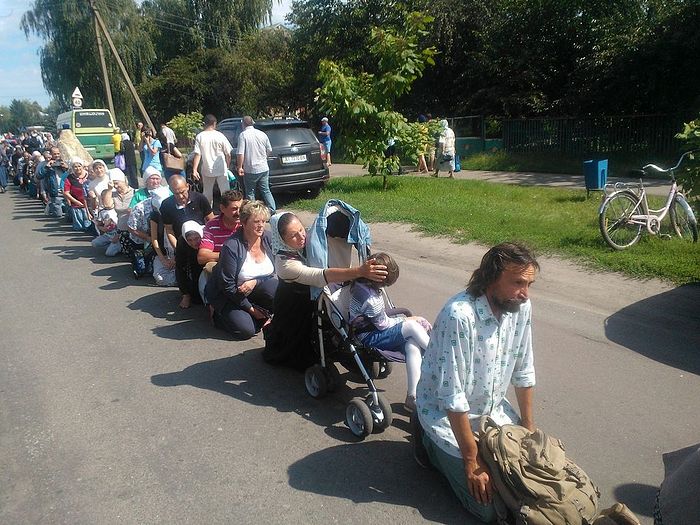 Some bankrupt politicians are from the same category as well. Representatives of certain political parties are unable to demonstrate to the electorate their real victories in the social and economical spheres, so they are making a virtual enemy of the cross procession, which gives them an opportunity to gain significant virtual victories.

This approach is very simple: you do not need to do anything special, but your approval rating may slightly rise. This version is confirmed by the fact that the most rabid critics of the cross procession participants are some deputies of the unpopular People’s Front party, which, after two years in power, is now supported by only one to two per cent of the population.

The third category of opponents is a group in some circles within the Ukrainian Greek Catholic (Uniate) Church. Very recently Cardinal Svyatoslav (Shevchuk) stressed that the main task of his Church is “to move further to the east of the Ukraine”. De facto he means penetration into the territories where Uniates have never been. He said: “We must be there where Christian believers are desperately needed.”

So, the procession of the cross has shown that the Orthodox Church is strong in the east of the country and that a “missionary conquest” of the region would be a strange and unnecessary venture. These considerations may have led to such a stern response from the hierarchy of the Ukrainian Greek Catholic Church. Its apotheosis is the recent interview of Svyatoslav (Shevchuk) to the Greek Catholic Church in which he openly pointed to the “political nature” of the all-Ukrainian cross procession.

There are also noteworthy critical remarks on the procession made by the Ukrainian Prosecutor General Yuriy Lutsenko in his interview with 112 TV channel. According to him, “It would have been more logical to take coaches from the Akhmetov’s travel agency to Moscow and to simulate the procession there, because in reality almost nobody is walking here. First they walk just one and a half to two miles before a town or a village, then they get onto coaches, move and repeat it again.”

Notably, Yuriy Lutsenko said this after his return from Zarvanitsa (a village in the Ternopil region, the Western Ukraine) where a cross procession of the Greek Catholic Church had been held on July 16-17. 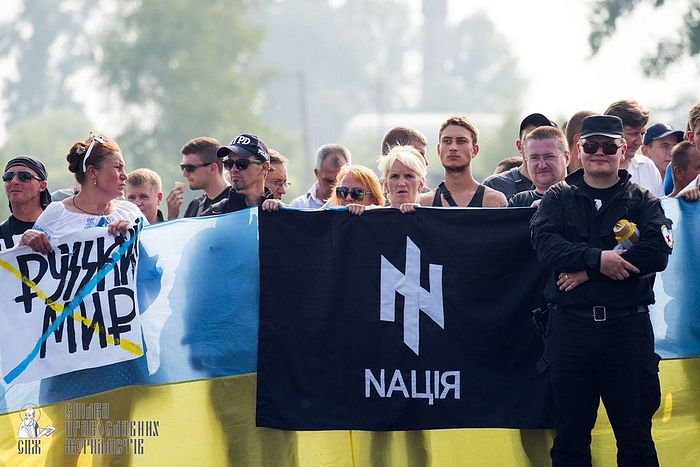 Protesters from the neo-Nazi faction.

And, finally, here is the fourth category. It is represented by some members of the Ukrainian authorities who are called by many “the party of war”. These are the groups and individuals who are not interested in cessation of the warfare in Donbass. If the war stops there, they will inevitably lose the immense illegal revenues (which they have been receiving due to this conflict) and will have to answer to the people for their total failures in very many important spheres. Now all of this is being concealed by the war. As long as the hostilities are taking place, they can easily keep the ordinary residents in check and direct the common folk’s anger against other enemies, for example, against UOC MP and its cross processions.

Regarding to the above, we have every reason to predict that the hierarchy of the canonical Ukrainian Orthodox Church and the cross procession participants will be faced with unprecedented pressure, which will be revealed both directly and indirectly. 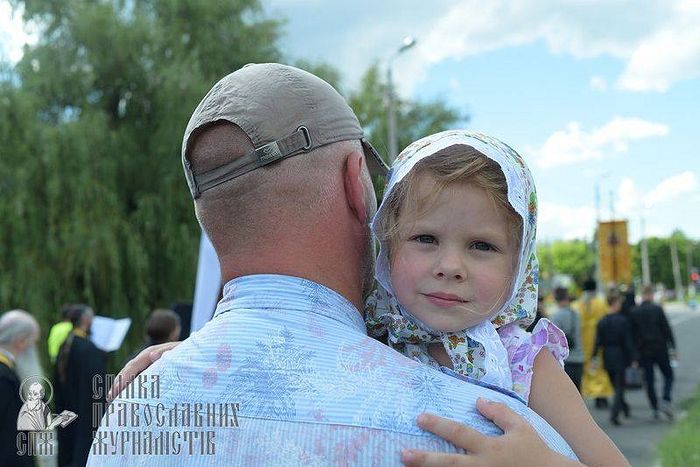 So the idea will be drummed into the pilgrims’ heads that they must necessarily get on buses and reach the St. Vladimir’s Hill (Vladimirskaya Gorka) unnoticed. A number of metal detectors will be installed there so that only a small group of the faithful could get close to the monument to the Holy Prince Vladimir, Equal-to-the-Apostles. Their aim is to prevent TV cameras from filming the real picture of what will be going on.

Beyond all doubt, there will be other restrictions as well. That is why the faithful members of the canonical Ukrainian Orthodox Church need fervent prayers of all Local Orthodox Churches at this moment. There is no politics, no PR or thirst for fame here. With this cross procession the Most Holy Mother of God will enter Kiev together with thousands of people who address their prayer petitions for peace to Her… the peace without which the Ukraine will have no future.

[1] The Ukrainian Orthodox Church has now estimated that there were 30,000 in Kiev alone.