To commemorate the feast of St. Vladimir, the Baptizer of Rus’, we publish here a sermon given by Metropolitan Hilarion of Kiev (commemorated October 21/November 3. St. Hilarion ruled the Church in Kievan Rus’ under the reign of Yaroslav the Wise (in baptism, George, +1054), the son of Holy Equal-to-the-Apostles St. Vladimir. He is considered the first primate of the Russian Orthodox Church chosen by a Council of Russian bishops. At that time in history, the Russian Church was a metropolitanate under the Patriarchate of Constantinople. The first metropolitans in Rus’ were Greeks, and were elected in Constantinople.

Before he was chosen as metropolitan, St. Hilarion was a priest in the village of Berestovo near Kiev and the spiritual father and co-ascetic of Prince Yaroslav. The Chronicles of Nestor record that Hilarion was a good man, learned and a faster, who prayed long hours in the forest were now the Kiev Caves Lavra stands. But more than just a “learned man”, St. Hilarion possessed great spiritual gifts and insight, and he gave his all to the service of Christ’s Church. When Rus’ was at war with Byzantium, the Russian Church decided to elect their own metropolitan without consulting Constantinople (for which they were later forgiven). Thus was St. Hilarion elected to head the Russian Church

St. Hilarion was also known for his inspired sermons, one of which (“Homily on Law and Grace) contained this praise of St. Vladimir. 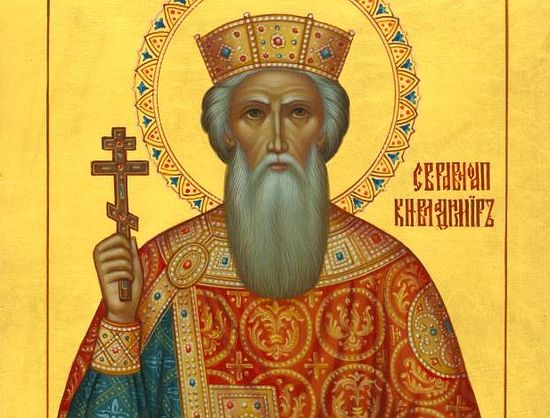 Rome sings the praises of Peter and Paul, through whom it believes in Jesus Christ, the Son of God; Asia, Ephesus and Patmos praise John the Theologian; India, Thomas; Egypt, Mark. All countries and cities and men honor and glorify their teacher who has taught them the Orthodox faith. Let us also, according to our power, praise with humble praises our teacher and instructor, who has done great and wondrous things, the great Tsar of our land, Vladimir, the grandson of old Igor, the son of the glorious Svyatoslav, who ruling their days in courage and valor have become famous in many lands, and are remembered and honored even now for their victories and power, for they did not rule in a poor and unknown country, but in Russia, which is known and celebrated in all the corners of the earth.

A good testimony to your piety, O blessed one, is that holy church of St. Mary, the Mother of God, which you have built on an Orthodox foundation, and where your valiant body now resteth, awaiting the archangel's trumpets. A very good and fine testimony is also your son George whom God has made an heir to your power, who does not destroy your institutions, but confirms them; who does not diminish the benefactions of your piety, but increases them; who does not spoil but mend, who finishes what you have left unfinished, as Solomon has completed the works of David; who has built a large and holy God's temple to His Divine Wisdom, to sanctify your city; who has embellished it with all beautiful things, with gold and silver and precious stones and sacred vessels, so that the church is a wonder to all surrounding lands, and so that no like can be found in all the north, from east to west; who has surrounded your famous city of Kiev with grandeur as with a crown; who has turned over your people and city to the holy, all-glorious Mother of God; who is ever ready to succour Christians, and for whom he has built a church with golden doors in the name of the first holiday of the Lord of the Holy Annunciation, so that the kiss which the archangel will give to the Virgin may also be on this city. To Her he says: “Rejoice, blessed one, the Lord is with you!” but to the city: “Rejoice, faithful city, the Lord is with you!”

Arise, honored dead, from your grave! Arise, shake off your sleep, for you are not dead, but sleep to the day of the common resurrection. Arise! You are not dead, for it is not right for you to die, who have believed in Christ who is the life of the whole world. Shake off your sleep, lift your eyes, that you may see with what honors the Lord has showered you above, and how you live unforgotten upon earth through your son! Arise! Look at your son George, see your bowels, your beloved one, see him whom God has brought out of your loins, see him adorning the throne of your land, and rejoice, and be glad! Then also see your pious daughter-in-law Irena, see your grandchildren, and great-grandchildren, how they live and are cared for by God, how they keep your piety according to your tradition, how they partake of the sacrament of the holy church, how they praise Christ, how they bow before His name! See also your city beaming in its grandeur! See your blossoming churches, see the growing Christianity, see the city gleaming in its adornment of saintly images, and fragrant with thyme, and re-echoing with hymns and divine, sacred songs! And seeing all this, rejoice and be glad, and praise the good God, the creator of all this.