The Memory of the Holy Fathers of the Six Ecumenical Councils 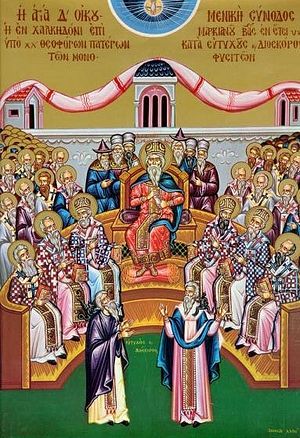 Today we celebrate the memory of the Holy Fathers of the Ecumenical Councils, who labored in defense of the Orthodox Faith against various heretical teachings. What is heresy? Heresy is an aberration of the Faith; it is a distortion of the true teaching of Christ, which was preached by the Apostles and preserved intact by the Church.

The hidden source of heresy is always the pride of the human mind, which does not want to submit to the teaching of the Church, but places one’s own mind, one’s own understanding, above that of the Church. Heresiarchs were people who were self-assured, stubborn, and ready to resist even the obvious truth, going against entire Councils of the Holy Fathers. Taking care for the purity of the Orthodox Faith, the Fathers of the Church found an effective means for dealing with heretics: at the Councils they examined their doctrines and suggested that those who had fallen into error repent. And if they did not agree to repent, then they were excommunicated from the Church and their doctrine was anathematized in order to protect the other children of the Church from danger. Each line of the Symbol of Faith, which we chant at the Liturgy, is a conciliar response to a concrete heresy.

The danger of heretical teachings lies in the fact that the error is so cleverly veiled, argued, and mixed with true words that the inexperienced person will find it difficult to determine what is right and what is wrong. So, for example, in the teaching of Arius everything was correct, except that Jesus Christ was not recognized as True God. Another heretic, Macedonius, was correct in everything, except that he did not acknowledge the Holy Spirit as True God. Nestorius did not recognize the Mother of God as Theotokos. The Catholic Symbol of Faith does not differ from the Orthodox, except that in the former the Holy Spirit proceeds from both the Father and the Son. Protestants carry with them and read the same Gospel as we do, but they do not recognize the Church’s Mysteries, the Cross, or icons. Moreover, to prove their heretical teachings, heretics make use of Holy Scripture, reason, and scientific evidence. They even have their own universities and learned degrees. And to what has their sophistry led them? In our times Protestant confessions have priests and even bishops who can be women, sodomites, and same-sex couples can marry in their churches. And they come to Russia to teach us the Christian faith.

Sometimes in life we have to deal with people who, although believers in God, are not Orthodox. They often try to start a conversation with us about faith, trying to prove and explain something to us. And we find ourselves ill prepared for such argument, not knowing what to argue. There is no need to be embarrassed by this, for we are not on an equal footing: they have prepared in advance, marking the necessary passages in the Bible, and have received instruction on how to deal with different cases. They ask us not their own questions, but ones specially designed in missionary centers by highly qualified specialists. And they approach someone on the street who is hurrying home from work, or going to the store to shop, whose mind is occupied with entirely different things at the moment. Perhaps he has only been to church a few times in his life, and cannot recite the “Our Father” without making mistakes. And here he suddenly is asked to reply to difficult theological questions. Of course he cannot find a decent answer! This resembles a surprise attack by robbers ambushing an unprepared person.

What should one do in such cases? There are known cases when church-going people have successfully conducted such polemics. But you need to be prepared that, if you respond to the first question then, even without hearing you out, they will ask a second, third, and fourth question, until you falter. But even if you win such an argument, they will not give up their errors; they will simply leave you alone and go after others. This is because they are not seeking the truth, but rather to swell the ranks of their organization. An unprepared person would do better not to engage in such disputes. It is better to say outright that I am no good at such questions. But if you really desire to get the right answer, then it is best to turn to the Theological Seminary or the Diocesan Missionary Department. Often street pseudo-missionaries say: “We would like to meet you again.” Why do they need this? It is in order to become acquainted, to find weak spots, to bring a senior person with them, and thereby to draw one into their organization. Therefore it is best of all to answer politely: “No, no. That’s not necessary. Sorry, but I’m in a hurry.” That’s all.

In the history of the Russian state there is a similar example. Once the Swedish army besieged Novgorod. The Swedish captain appealed to the Archbishop of Novgorod to organize a debate about the faith. And he promised that, if the Novgorodians win, they would retreat from the city; but if the Swedes won, then they would be allowed to take the city without a fight. The Archbishop of Novgorod replied to them: “We received the faith from the Greeks. Therefore, if you want to argue about the faith, go to Constantinople.”

Celebrating today the memory of the Holy Fathers who established Orthodoxy at the Ecumenical Councils, let us pray to the Lord, that He would continue to protect His Church from heresy and schisms, and confirm the Holy Orthodox Faith of Orthodox Christians unto the ages of ages.

Anthony7/31/2016 1:16 pm
A very timely article especially as the Church finds Herself once again scandalised and attacked from within by pseudo-Orthodox such as the heresiarch Phanar of Constantinople, Bartholomew (whom incidentally Mount Athos are considering ceasing commemorating - much as they did with Athenagoras). The formula for heretical attack this time is ''love'' and ''unity''. - ''That all may be one'', the ecumenists love to prattle. Since when was the Church ever divided? She was not. Heretics of old were simply cut off like rotting branches, that the whole vine would not become diseased and infected. Such should be the case with ecumenism and its adherents once again.
×