On St. Elias and the Widow Gathering Two Sticks of Wood

Why is St. Elias such an important and revered Old Testament prophet for Orthodox Christians? What is the typological interpretation of certain events in his life? Blessed Augustine talks about St. Elias as a type of Christ, and the widow of Sarephta as a type of the Church. 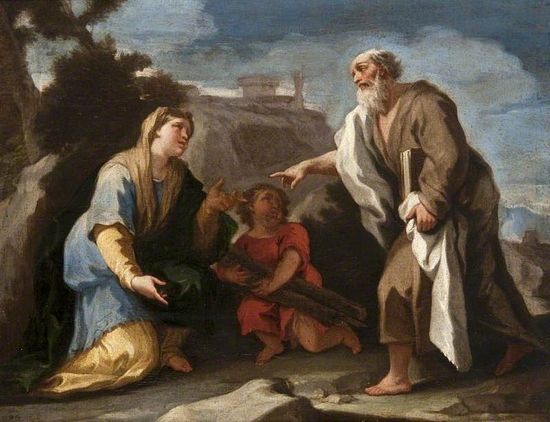 Prophet Elias and the Widow of Sarephta.

I have frequently admonished you, beloved brethren, that in the lessons which are read to us on these days we should not follow the killing letter and leave the vivifying spirit, for as the Apostle says: The letter kills, but he spirit give life.[1] If we want to understand only what is literally said, we will derive little or almost no edification from the sacred lessons. Indeed, all the things which are read were a type and image of the future; they were prefigured in the Jews, and fulfilled in us by the gift of God’s grace. Blessed Elias typified our Lord and Savior. Just as Elias suffered persecution by the Jews, so our Lord, the true Elias, was condemned and despised by the Jews. Elias left his own people and Christ deserted the synagogue; Elias departed into the wilderness and Christ came into the world. Elias was fed in the desert by ministering ravens, while Christ was refreshed in the desert of this world by the faith of the Gentiles. Truly, those ravens which took care of Blessed Elias at the Lord’s bidding prefigured the Gentiles, for on this account it is said concerning the Church of the Gentiles: I am dark and beautiful, O daughter of Jerusalem[2] Why is the Church dark and beautiful? She is dark by nature, beautiful by grace. Why dark? Indeed, in guilt was I born, and in sin my mother conceived me.[3] Why beautiful? Cleanse me of sin with hyssop, that I may be purified; wash me, and I shall be whiter than snow.[4] Why dark? The Apostle says: I see another law in my members, warring against the law of my mind and making me prisoner to the law of sin.[5] Why beautiful? Who will deliver me from the body of this death? The grace of God through Jesus Christ our Lord.[6] Truly, the Church of the Gentiles was like a raven, when she despised the living Lord and before receiving grace served idols as dead bodies.

After this, Elias was commanded to set out for Sarephta of the Sidonians, in order that he might be fed there by a widow. Thus, the Lord spoke to him: Go to Sarephta of the Sidonians: I have commanded a widow there to feed thee.[7] How and by whom did God command the widow, since there was almost no other prophet at that time except blessed Elias, with whom God spoke quite plainly? Although the sons of some of the prophets lived at that time, they feard the persecution of Jezebel so much that they could scarcely escape even when hidden. I have commanded a widow, said the Lord. How does the Lord command, except by inspiring what is good through His grace within a soul? Thus, God speaks within every man who performs a good work, and for this reason no one should glory in himself but in the Lord. Were there not many widows in Judea at that time? Why was it that no Jewish widow merited to offer food to blessed Elias and he was sent to a Gentile woman to be fed? That widow to whom the prophet was sent typified the Church, just as the ravens which ministered to Elias prefigured the Gentiles. Thus, Elias came to the widow because Christ was to come to the Church.

As we mentioned, that widow prefigured the Church, and her son was a type of the Gentiles. The son of the widow lay dead because the son of the Church, that is, the Gentiles, were dead because of many sins and offenses. At the prayer of Elias, the widow’s son was revived; at the coming of Christ, the Church’s son or the Christian people were brought back from the prison of death. Elias bent down in prayer and the widow’s son was revived; Christ sank down in His Passion and the Christian people were brought back to life. Why blessed Elias bent down three times to arouse the boy I believe that the understanding of your charity has grasped even before I say it. In the fact that he bowed three time is shown the mystery of the Trinity. Not only the Father without the son, nor the Father and Son without the Holy Spirit, but the whole Trinity restored the widow’s son or the Gentiles to life. Moreover, this is further demonstrated in the sacrament of Baptism, for the old man is plunged in the water three times, in order that the new man may merit to rise.

After this blessed Elias presented himself to the king: Went up to Mount Carmel, and put his head between his knees,[10] praying the Lord to send rain upon the earth. And he said to his servant: Look toward the sea.[11] When the boy reported that he saw nothing at all, he told him: Go and look seven times.[12] The seventh time he returned and said: I see a little cloud rising out of the sea like a man’s foot. And suddenly the heavens grew dark, and there fell a great rain.[13] For this reason, as we said, Elias prefigured our Lord and Savior. Elias prayed and offered sacrifice; Christ offered Himself as a spotless sacrifice for the whole world. Elias prayed on Mount Carmel, Christ on Mount Olivet. Elias prayed for rain to come upon the earth; Christ prayed that divine grace might come down into the hearts of men. When Elias told his servant: Go, and look seven times[14] he signified the sevenfold grace of the Holy Spirit which was to be given to the Church. When he declared that he saw a little cloud rising out of the sea, it prefigured the Body of Christ which was to be born in the sea of this world. Therefore, lest perchance anyone doubt, he said that the cloud had the foot of a man, surely of that man who said: Who do men say the Son of Man is?[15] After three years and six months, rain came down from heaven at the prayer of Elias, because at the coming of our Lord and Savior the rain of the word of God happily watered the whole world during the three years and six months in which He deigned to preach. Just as then, at the coming of Elias all the priests of the idols were killed and destroyed, so at the advent of the true Elias, our Lord Jesus Christ, the wicked observances of the pagans were destroyed.

By briefly suggesting these truths to the minds of your charity, we have shown to the eyes of your faith a few paragraphs as example by which your holy desires may be aroused to examine the divine mysteries in a salutary manner. Now in order that by our wholesome advice we may provide spiritual food for your holy souls to chew over continually, so that they may not by chance disappear from your memory, we will, if you desire it, make a summary of what was said. Thus, as we mentioned above, understand holy Elias as a type of our Lord and Savior. Just as our Lord arose and ascended into heaven after he had exercised much power and suffered His Passion, so Elias was taken up into heaven in a fiery chariot after the many miracles which God had worked through him. The fact that Elias deserted Judea signified that Christ left the synagogue; the ravens which ministered to Elias, as was already said, prefigured the Gentiles. The widow who received Elias in Sarephta typified the Church, while the two sticks she was gathering showed the mystery of the cross. Now if, as we trust, you receive these truths with sincere kindness, dearly beloved, like clean animals chewing them over in your hearts by continual reflections, there will be fulfilled in your what was written: Precious treasure rests in the mouth of the wise;[16] with the help of our Lord Jesus Christ, to whom is honor and might together with the Father and the Holy Spirit, world without end. Amen.