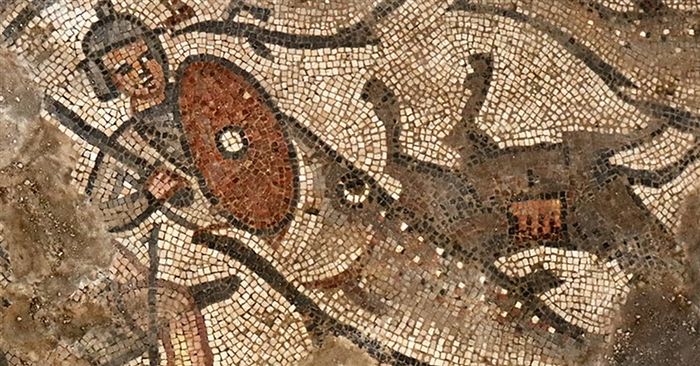 Exquisite mosaics depicting biblical scenes — one of Noah’s Ark, the other the parting of the Red Sea — were uncovered this summer by archaeologists excavating a fifth-century synagogue at Huqoq, an ancient Jewish village near the Sea of Galilee.

A consortium of universities, led by Jodi Magness of the University of North Carolina at Chapel Hill, uncovered the mosaics during its fifth annual excavation in June.

Magness said the mosaics, like others discovered at the synagogue since 2012, are of “extremely high artistic quality,” based on their artistry and the high number of stone mosaic cubes used in the designs.

The Noah’s Ark mosaic includes pairs of bears, donkeys, leopards, camels, lions, ostriches and snakes, just as described in the Book of Genesis.

The mosaic of the parting of the Red Sea features Pharaoh’s soldiers drowning with their horses and chariots.

“Of course the story of Noah’s Ark and the parting of the Red Sea were known to Jews, as well as Christians, at the time because they read the Hebrew Bible,” Magness said. “We have other ancient synagogues where these scenes are depicted, though they are not common in synagogue art.”

The archaeologist said excavation experts dug down to a level of soil where, based on findings elsewhere at the site, they hoped mosaics might be found.

“As our site conservator, Orna Cohen, worked methodically to brush away the dirt, little by little, we all stood around and began to see animals. At some point we realized this was a depiction of Noah’s Ark.”

“We could see little bits and pieces of people, fish, chariots. We all stood around and guessed” whether the mosaic depicted a biblical story and if so, which one.

“I won the parting of the Red Sea” guess-a-thon, she said with a laugh.

But the Red Sea mosaic features a twist on the biblical story: a large fish swallowing Pharaoh’s soldiers.

“This represents an elaboration on the story that must have been circulating at the time,” she said.

The mosaics have been removed from the site for conservation and study.

But a previously discovered mosaic from the site that depicts Samson carrying the gate of Gaza on his shoulders (Judges 16:3) is on display at Kibbutz Ginosar, on the shores of the Sea of Galilee.

Magness would love to see the mosaics eventually restored to the Huqoq synagogue.

“It would require an enormous investment of money to develop the site, a building with a guard and cooperation between different government authorities that would have to take responsibility. Who owns the land? Who would maintain it?”

Still, she added, “There are conversations at the highest levels to make this happen.” “I Went to Synagogue to preach Christ”
Priest George Maximov

“I Went to Synagogue to preach Christ”
Interview with Yevgeny Verner, a former Jew (includes VIDEO)
Priest George Maximov
The guest of today’s program is Yevgeny Verner, actor and producer. As a descendant of an old Jewish family, he came to Christ through Judaism. In his interview to Father George, he tells us his story about how the Savior literally called him. He also discusses so-called “national” religions, Cabbala and whether or not modern-day Judaism is the successor of the Old Testament traditions. Newly restored floor mosaics from antiquity synagogue in Bulgaria's Plovdiv unveiled for the first time
The central image of the mosaics is a large menorah (a seven-lamp lamp stand, the symbol of Judaism). Unfortunately, the lower part of the candelabrum could not be restored because the mosaics were destroyed in the Early Byzantine period. Image of Bible's Samson Discovered at Ancient Synagogue
An archaeological dig in Israel has uncovered a synagogue building which features a rare mosaic image of the biblical character Samson.
Comments
×