What is Orthodox Asceticism? 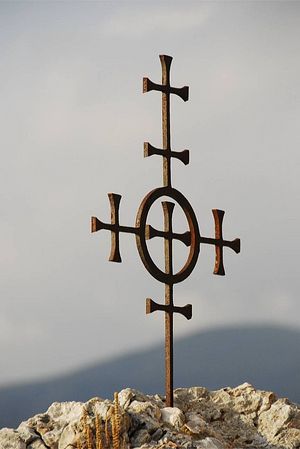 Asceticism is a key part of Orthodox Spirituality. It is not a negative activity but a most positive one. It is the primary means by which we come closer to God. It involves the activities that help us perfect our way of life to be more like Christ.

It is the part of spirituality that deals with the rules and efforts that bring man to the first step of the ascent to perfection, to contemplation and union with God.

While our salvation depends of the grace of God, asceticism is "the active part of the spiritual life." It is the effort that we must make in cooperation with God's grace. It is not an option but a central part of responding to His grace so we can be perfected by it. God always leads but we must also follow.

Saint Paul used the metaphor of an athletic competition to describe asceticism. He writes,
if anyone competes in athletics, he is not crowned unless he competes according to the rules. (Tim 2, 2:5)
Do you not know that those who run in a race all run, but one receives the prize? Run in such a way that you may obtain it.And everyone who competes for the prize is temperate in all things. Now they do it to obtain a perishable crown, but we for an imperishable crown. Therefore I run thus: not with uncertainty. Thus I fight: not as one who beats the air. But I discipline my body and bring it into subjection, lest, when I have preached to others, I myself should become disqualified. (1 Corinthians 9:24-27)

Ascetic efforts like prayer, fasting, and repentance are what liberates us from sin. They fortify our true nature. They are all part of a most positive effort.

We must accept that we are weak and acknowledge that our mind is easily swayed. We are attracted by pleasure and strive to avoid pain. We are tossed to and fro by these two forces. Christ, being fully human, was able to conquer the love of passion and the fear of death. It is through asceticism that we overcome these forces and become attached to Christ and attain His human nature. "His force becomes our Force."
We must also remember that asceticism in not just about overcoming sinfulness. It is also about attaining the virtues.

Fr Staneloe points out the following:

Christianity considers that the direct vision of God cannot be reached without the grace given by Him and the reception of grace requires a mortal perfection of the the whole huan nature by ceaseless divine help.

To be united with God we have to make ourselves worthy by being sincere, clean and good because He is a force that is above an offensive that uses force or shyness. The path to union with God is a long road. It is"illumined by not only reason, but faith too, and by prayer and the help of God."

Engage in the race and seek the crown as Saint Paul tells us. Just like exercise is positive when you are preparing for an athletic competition, asceticism is a positive action when you are seeking the ultimate crown, union with God. Asceticism as Cure for Consumerism: An Interview with Fr. Gregory Jensen

Asceticism as Cure for Consumerism: An Interview with Fr. Gregory Jensen
With the impending release this week of the papal encyclical on ecology, attention is once again focused on the social outworkings of the Christian gospel. Buddhism and Eastern Asceticism Compared to Orthodox Christian Asceticism
Archimandrite Zacharias
It is unfortunate that there is widespread confusion, not to mention delusion, in the inexperienced, whereby the Jesus Prayer is thought to be equivalent to yoga in Buddhism, or 'transcendental meditation', and other such Eastern exotica. Any similarity, however, is mostly external, and any inner convergence does not rise beyond the natural 'anatomy' of the human soul.
Comments
×