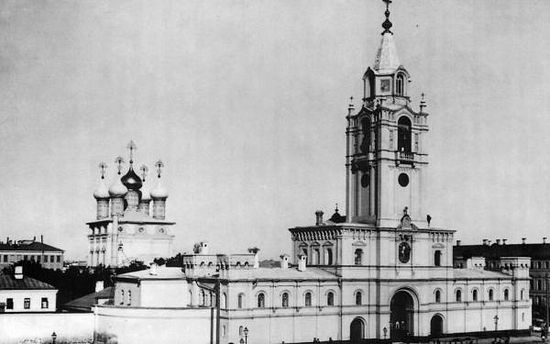 Representatives of the local history society “Old Moscow” sent a letter to the mayor with an appeal to restore the Strastnoy (Passion) Monastery on Pushkin Square, demolished in 1937, reports Interfax-Religion.

More than 120,000 signatures have been gathered over thirteen years in support of the idea, wrote the paper “Moscow Komsomolets” on Monday.

“There are plans for all structures of the monastery as they existed in 1937. In some places the buildings extend beyond the boundaries of the current Pushkin Square up to 3.5 meters, including some smaller constructions, monastery cells, and the most valuable major structures—the cathedral, bell tower, trapeza, and Church of All Saints of Kiev—but without affecting the movie theater,” stated the director of the research group of the aforementioned society and member of the Moscow Union of Architects Aida Melikhova.

The historians have also argued for the transfer of the Pushkin monument to its original place, on the opposite side of Tverskaya Street. In their opinion, after moving the monument the bell tower could first be placed on the square.

Meanwhile, the Moscow architectural committee reported that the monument to Pushkin is an object of cultural heritage of national importance, and questions about its relocation should be addressed to the Ministry of Culture. The activists are also planning to send a letter to the Ministry. Biblical Park to be set up in Moscow

Biblical Park to be set up in Moscow
The country's first park of plants mentioned in the Bible will be set up near the Holy Trinity Park in the Lefortovo Moscow District.