The Narthex as a Dynamic Place of Transformation 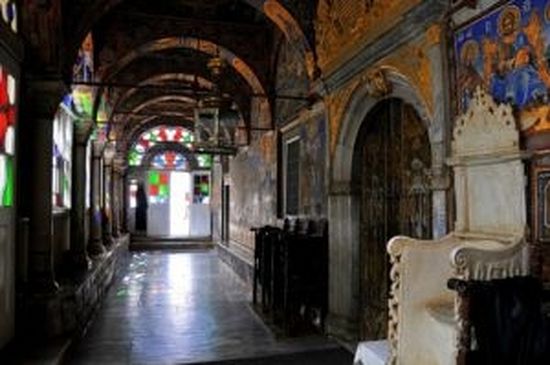 The icon of the Fest of Transfiguration‚ which we celebrate on August 6th‚ is a beautiful metaphor for the union and the reconciliation that Christ brings between the Old and the New Testament. In this icon we see Christ in the Uncreated Light‚ flanked on each side by Moses and Elijah‚ prophetic figures of the Old Testament while‚ prostrated in front of the transfigured Christ‚ we find three of His disciples Peter‚ John and James.

St. Ephraim the Syrian makes a point of this “reunion” of old and new to say:

The Prophets and the Apostles gathered on the mount were filled with joy; the Prophets rejoiced for they have beheld here His humanity which they did not see before; the Apostles rejoiced for they beheld here the glory of His Divinity which before they had not understood. They stood before the Lord as ministers‚ and looked at one another‚ Prophets at Apostles and Apostles at Prophets. There they mutually extended to themselves the sights of the prototypes of the Old and New Covenants. Thus‚ the mount represents the Church itself because Jesus united in it the two covenants accepted by the Church and has shown that He is the Giver of both.

From an architectural perspective‚ the Orthodox Church is also trying to represent this dynamic association between the Old Covenant and the New‚ pointing towards the promised Kingdom. Entering an Orthodox temple we see a carefully crafted advancement from the narthex‚ through the nave and towards the altar. This is also the progression of any man or woman that comes into the faith and enters the Church in the hope of the Kingdom.

First there is an inward movement form the narthex to the nave (i. e. from sin to virtue). A prime example is the beginning of the Service of Holy Baptism when‚ after the reading of the Prayers for making of a Catechumen‚ the baptismal party proceeds through the Royal Doors (the doors between narthex and the nave) and enters into the nave for the remainder of the Sacraments of Baptism‚ Chrismation and Holy Communion.

Second there is an outward movement form nave to narthex‚ for instance during the Divine Liturgy‚ when‚ before the reading of the Creed and the beginning of he Liturgy of the Faithful‚ the catechumens and the penitents were dismissed from the Nave back into the narthex and the door was closed allowing access only to the faithful for the remainder of the Liturgy. The call “the doors‚ the doors” and the dismissal at this point emphasizes the necessary preparation in order to access the Kingdom. A famous illustration comes from the life of Mary of Egypt‚ when‚ being in a sinful unrepentant state‚ she could not enter into the Church of the Sepulcher from the narthex into the nave because of her sins but‚ only after repenting and making a promise of virtue‚ she was allowed to enter and receive the Sacraments.

There is however another more “positive” outward movement towards the narthex‚ the Lity Service during the celebration of Festal Vespers‚ when the priest‚ preceded by altar boys and the icon of the feast‚ exits from the nave to the aarthex and celebrates there the festal Lity service with intercessory prayers for the entire world. The Lity takes place in the narthex as a gesture of reaching out to the catechumens and penitents‚ who were not allowed to enter the nave in the old times. In this way the Church goes out into the world‚ inviting the entire kosmos to participate in the joy of the feast.

The iconography of the narthex further enhances the preparatory role of this space. It generally consists of scenes of the Old Testament: the Creation and the Fall‚ views from the life of Abraham‚ Moses and other prophets of the Old Testament. We might also see prophetic scenes that shed light on the life of Christ like Jonah‚ a symbol of Christ and His burial and resurrection after three days‚ the Three Youths in the furnace‚ another symbol of Resurrection and so forth. Sometimes‚ mostly in monastic settings‚ we could also find ancient philosophers like Plato‚ Aristoteles etc‚ as a symbol of the fallen and incomplete wisdom of the world before the knowledge of Christ.

In the iconographic vision of the Church the architecture the narthex remains the place of origins‚ the starting point of Creation and the path to its redemption in Christ the Savior. Anyone that visits an Orthodox Church has to go through this space and recall the origin of the world from God as one gets engaged in the salvific movement of the Church and reaches for his personal transfiguration into the Kingdom.