The Seat of Mercy and the End of the Legal View 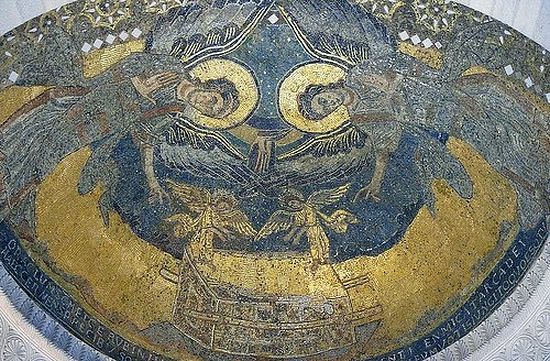 Among the more problematic words in the New Testament is the Greek hilasterion. It is translated as “propitiation” in some of the older English Bibles, and “expiation,” in newer ones. It’s actual meaning is neither. The word literally means “the place of mercy,” and is the Greek word used in the Old Testament (LXX) to describe the “Mercy Seat” on the Ark of the Covenant.

In Leviticus, the ritual for atonement is described, as an anointing of the mercy seat with the blood of a bull. The details are not terribly important for this article. But the question to consider is simply, what is going on in such an act of atonement? Many contemporary Christians have a long habit of describing such primitive actions with abstract concepts of symbolism. “This represents that…” is the typical run of things. Or, everything that happens is seen as taking place in the mind of God such that “and God considered this suitable for the forgiveness of their sins…” Despite all of the claims of “literalism,” very few ever seem to take texts at their face value, particularly if it forces them to abandon their own worldview.

And he shall go out to the altar that is before the LORD, and make atonement for it, and shall take some of the blood of the bull and some of the blood of the goat, and put it on the horns of the altar all around. Then he shall sprinkle some of the blood on it with his finger seven times, cleanse it, and consecrate it from the uncleanness of the children of Israel. And when he has made an end of atoning for the Holy Place, the tabernacle of meeting, and the altar, he shall bring the live goat. Aaron shall lay both his hands on the head of the live goat, confess over it all the iniquities of the children of Israel, and all their transgressions, concerning all their sins, putting them on the head of the goat, and shall send it away into the wilderness by the hand of a suitable man. The goat shall bear on itself all their iniquities to an uninhabited land; and he shall release the goat in the wilderness. (Lev 16:18-22)

The passage describes a very concrete, almost magical, scenario. The “uncleanness” of the people is cleansed through the sprinkling of blood, and then their sins are spoken over a goat thus “putting them on the head of the goat,” and the goat is sent away – taking their sins with him.

First, I suggest that readers note that there is not a hint of contractual/legal imagery here at all. Sins are not abstract infractions of the law in the modern legal sense but are quite concrete. They cause people to be unclean; they can be cleansed by blood; they are put on the head of a goat and sent away.

Such imagery, particularly if treated in a literal manner, simply baffles the modern mind. As I have noted repeatedly, the modern mind has somehow made abstractions its reality, while treating its true concrete existence as a metaphor, something that, at best, only gives rise to abstraction.

Hebrew is a decidedly concrete language – abstractions are fairly rare. This is difficult for modern readers to grasp, since we frequently take very concrete words and assume their meaning to be an abstraction. Among the greatest injustices done to Hebrew thought has been the modern Christian idealization of its concrete realities. The modern world prefers abstractions, whether psychological, legal, contractual or the like. Reading those concepts into the words of the Old Testament, however, is simply anachronistic.

The Law is itself a primary example. Here is a primary question: Is a law true because there is something inherent within it, or is it simply a law because someone says it is? The modern world has come down firmly on the side of voluntarism – a law simply expresses a will. As such, a law is nothing more than the guarantee of force and violence. It is a statement of the principles by which and on account of which force and violence will be exercised against someone.

In the Old Testament, however, the Law of God seems to have something quite substantive about it within itself:

The law of the LORD is perfect, converting the soul; The testimony of the LORD issure, making wise the simple;
The statutes of the LORD are right, rejoicing the heart; The commandment of the LORD is pure, enlightening the eyes;
The fear of the LORD is clean, enduring forever; The judgments of the LORD aretrue and righteous altogether.
More to be desired are they than gold, Yea, than much fine gold; Sweeter also than honey and the honeycomb.
Moreover by them Your servant is warned, And in keeping them there is great reward. (Psa 19:7-11 NKJ)

In the modern mind, such a passage only means that God did a good job in willing His law, and those laws reflect the goodness of His will. But the laws remain abstractions, simply the expression of His will. And, true to voluntarism, they only gain their power through the force and violence with which God backs them up.

“…by them is Your servant warned…and there is great reward.”

Up until the Middle Ages, the notion of law, whether Hebrew, Greek, etc., was generally grounded in a notion of realism, that is, the truth of a law was inherent in how things are and how they are made. The law can be discerned because it is not simply the product of a will. God’s will is expressed in how He created the world, but not by arbitrary rules enforced through sheer acts of force or violence.1

However, in the Middle Ages, in the rise of nominalism (cf. William of Ockham), a new theory of law came into the discussion, one in which law is simply the arbitrary act of a will. Modernity has seen the steady erosion of realism (as well as the notion of natural law) and its replacement with a radical nominalism. The most extreme statement of this latter view can be seen in Anthony Kennedy’s famous dictum in a Supreme Court decision regarding abortion:

“At the heart of liberty is the right to define one’s own concept of existence, of meaning, of the universe, and of the mystery of human life.”

This extreme expression of voluntarism reveals the element of absurdity in pure voluntarism. Some might argue that the flaw in Kennedy’s statement lies in his attribution of this possibility to human beings, when it belongs to God alone. But it is the nominalists of modernity, including the Christian nominalists, who taught modernity how to reason in such a manner.

The Old Testament speaks of the Law in very substantive terms, much the same way that later Old Testament writings speak of Wisdom. The Law is far more than a commandment. The commandment describes something very concrete, something that reveals how the world actually is as well as how human beings and all creation works. It is no more arbitrary than DNA is arbitrary. It is, if you will, the DNA of the universe.

Sin is thus not primarily a willful breaking of Another’s will. It is not a transgression of something external to us, enforced only through the threat of violence or force. It is a violation of the very constitution of our being and of the world around us. In the language of Pavel Florensky, it is “disintegration.” St. Athanasius and a number of other fathers described it as a movement towards non-being. Sin is substantial. It can be healed and washed, excised and destroyed.

Sin is not a “legal” construct in the modern sense of legal nominalism.

And this brings us back to the Mercy Seat. Christ is indeed the “Mercy Seat” for our sins. It is incorrectly translated as propitiation or as expiation. Both terms tend to abstract what is actually taking place, as if the Cross changes something somewhere else, something external. Our sins are literally placed on Christ. And as our Mercy Seat, He destroys them, cleanses them, remits them, carries them away, etc. It would be a frightful death were it meant to accomplish something in the abstract. But sin is not an abstraction. Christ’s bearing of our sin is the bearing of our disintegration, our drive towards non-being. It is the recreation of His creation.

And as they were eating, Jesus took bread, blessed and broke it, and gave it to the disciples and said, “Take, eat; this is My body.” Then He took the cup, and gave thanks, and gave it to them, saying, “Drink from it, all of you. For this is My blood of the new covenant, which is shed for many for the forgiveness of sins.” (Mat 26:26-28) May the Lord Rule in Your Heart: Selected Sayings of St. Nektary of Optina
St. Nektary of Optina
Take this advice for your whole life: if the superiors or those older than you suggest something, then no matter how difficult or how lofty it might seem, do not refuse. God will help you for your obedience. The Moral Path of Being
Fr. Stephen Freeman
If Christian morality is not a legal or forensic matter, how are we to think about moral behavior? Does the word have no use for Orthodox Christians? What do we think about when we confess our sins?
Comments
×