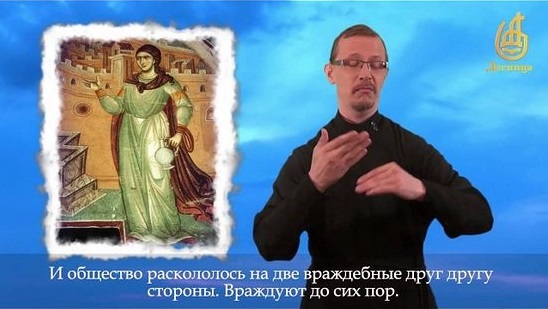 The first Orthodox video channel for the deaf and hearing-impaired, “Desnitsa (Right Hand),” started broadcasting on August 12, 2016. The project, operating on YouTube, has uploaded its first ten videos in Russian sign language with subtitles. There will be fifty missionary videos uploaded throughout August, reports Patriarchia.ru.

The channel “Desnitsa” is the first nationwide project of the center for work with the deaf and hearing-impaired which operates in the Cathedral of All Saints Who Have Shone Forth in the Russian Land in Novokosino. The realization of the project was made possible by the contest “Orthodox Initiative.”

According to parish rector Archpriest Michael Zazvonv, the main task after the launch of the channel is to collect and analyze feedback: “Comments from the target audience will help us to make necessary adjustments when shooting new videos. I really hope that we’ll be able to shoot between fifty and a hundred films this year.”

The center for working with the deaf and hearing-impaired in the Church of All Saints Who Have Shone Forth in the Russian Land in Novokosino, Moscow began its work in October 2015.

To date, the community of deaf and hearing-impaired people numbers thirty people. There are weekly Divine Liturgies (Sundays in the summer, Saturdays beginning in fall) in the church with sign language translation, after which there is a Sunday school class for the deaf. Excursions and pilgrimages are also periodically organized. From February to May 2016 the center held held courses for learning Russian sign language. Princeton professor calls for killing disabled infants under Obamacare
According to an article published Sunday by World Net Daily, a Princeton University professor has suggested that severely disabled infants be killed to cut health care costs and for moral reasons.
Comments

Janet McKeehan8/18/2016 12:57 am
What a blessing for the Russian Deaf and Hard of Hearing. Thank you for the detailed article and interview.

I am an interpreter for Deaf/HH in Oregon, USA. It was nice to see many similarities and some differences of the Deaf/HH.

Do you know of any organizations for Orthodox Deaf in the USA?

Thank you for your article.